America's Javelin Missiles Are Going to Ukraine (but Can They Stop Russia's Army?) 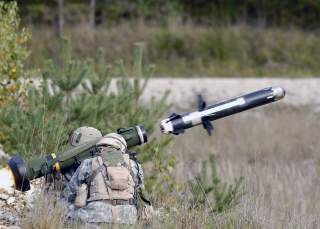 On December 22, 2017 the State Department announced it had issued an export license for lethal military aid to Ukraine—including $47 million for 210 Javelin missiles and thirty-five command launcher units (CLUs) with which to launch them.

The decision has been welcomed by Kiev and elicited an angry response from Moscow.

Ukraine first requested Javelins in the fall of 2014 to counter Russian tank units that had intervened in a separatist conflict in Eastern Ukraine, sending the Ukrainian Army into retreat. But while Washington has provided training, rations and $750 million in others forms of nonlethal military aid to Ukraine, Javelins had remained off the gift list for fear that the inevitable footage of missiles stamped “Made in U.S.A.” blowing up tanks crewed by Russian military personnel (or ‘volunteers’ in the Kremlin’s parlance) would heighten tensions with the nuclear-armed state.

Setting aside the mounting contradictions in the current administration’s topsy-turvy relationship with Moscow, the curious thing about the fairly small Javelin shipment is that the missiles could stir up a conflict that has remained largely static and involved little tank combat since 2015.

The infrared-guided Javelin anti-tank guided missiles (ATGMs) is distinguished by its ability to plunge down onto the top armor of a tank, which is invariably much thinner; it also employs a tandem warhead designed to defeat Russian explosive reactive armor (ERA). Furthermore, the Javelin is a “fire and forget” weapon, meaning the firer can immediately duck back into cover after launch.

While the missile can also be used for precision strikes on soft targets, this application is limited by the Javelin’s comparatively high cost of $78,000 per missile. You can read more about the Javelin and its combat record here.

In the summer of 2014, Ukrainian forces were close to suppressing a Russian-separatist uprising in Eastern Ukraine when Russian mechanized units began pouring over the border. Between August 2014 and February 2015, these drove back Ukrainian forces and overran key government strong points including Ilovaisk, Luhansk, Donetsk and Debaltseve. The ‘volunteer’ tank units included upgraded T-72B3 tanks and possibly T-90s, which outmatched Ukrainian T-64s.

It was reported that Ukrainian anti-tank missiles were proving ineffective, either prematurely detonating due to Russian reactive armor, or veering off target at the last moment due to active protection systems. These reports led members of Congress to call for sending Javelins to Ukraine.

The Javelin would likely be more effective than the older ATGMs possessed by Ukrainian forces. While upgraded Russian tanks include countermeasures intended to defeat tandem warheads and obscure a tanks’ infrared signature, they are untested verses a Javelin.

What Impact Will the Javelins Have?

In a piece for the Ukrainian Odessa Post, analyst Nikolai Holmov is skeptical that the Javelins will make much of a difference, except in boosting Ukrainian ‘morale.’ In his opinion, electronic warfare assets and counterbattery radars (allowing Ukrainian artillery to strike back at separatist artillery) are of far greater importance to Ukraine.

Holmov predicts that the thirty-five launch units will be positioned at key defensive strong points behind the frontlines, rather than dispersed ineffectually in forward positions. However, he speculates that the Ukrainian military might make limited attacks with the missile to demonstrate the weapon’s effectiveness, and anticipates this would engender retaliatory strikes from Russian, possibly of an asymmetrical nature.

Michael Kofman, an analyst with extensive knowledge of Russian military affairs, is also skeptical that a “few missiles” would be of any serious military benefit in a New York Times column in August. He feels the Javelin is “expensive and impractical” for Ukraine, especially compared to using the same money to purchase a larger number of new Ukrainian ATGMs.

Kofman also warns that if Javelin missiles result in dead Russians, Moscow could ‘signal back’ with dead Americans. One obvious avenue for retaliation would be providing weapons to the Taliban in Afghanistan. Earlier in 2017, the military and State Department claimed they had evidence Russian agents were providing small arms to the Taliban. This could theoretically be stepped up to heavier weapons.

The Wilson Center analyst correctly points out that snipers and artillery have accounted for far more deaths in Eastern Ukraine than tanks—especially since the loosely observed Minsk agreements stipulate that tanks had to be withdrawn miles away from the frontlines. However, I disagree with his implication that the number of separatist tanks is exaggerated and that they had a limited impact while active.

To use one crude measure, the Russian site ‘Lost Armour’ has photographs of no fewer than eighty-four knocked out separatist T-64 and T-72 tanks—not including numerous other armored vehicle types. To give two examples of major tank actions, a battalion-sized unit of thirty tanks reportedly spearheaded a failed offensive in Mariupol in 2014. In January 2015, thirty to forty tanks reportedly overran a Ukrainian Army strongpoint at Donetsk International Airport after it was leveled by 2S4 self-propelled mortars.

However, the Russian tank engagements mostly occurred between August 2014 and mid-2015. Suggestively, Lost Armor has no photos of separatist tanks destroyed in 2017.

It also true that small shipments of advanced weapons rarely have a great impact. But there are notable exception: smuggled U.S.-built Stinger missiles brought down Soviet helicopters and jets in Afghanistan, while Russian AT-14 Kornet anti-tank missiles furnished to Hezbollah via Syria damaged or destroyed more than twenty heavily armored Israeli Merkava tanks in 2006. While the full extent of these missiles’ impact is debatable, they undeniably curtailed military operations and contributed to narratives of defeat.

Javelins could potentially serve as a deterrent against renewed Russian armored attacks, if they could be concentrated where they are likely to occur. However, such a renewed offensive already seems unlikely given the static frontlines for the last two years, and the limited gain and considerable economic drain the conflict has imposed on Russia.

Could the Javelins embolden the Ukrainian military to undertake major offensive actions, as Moscow argues? This too seems unlikely due to the small scale of the shipment, current political disarray in Ukraine, and the reality that if pro-Russian separatists came close to military defeat, Russia would likely counterescalate.

Thus, the relatively small and expensive Javelin sale may be more significant for its political symbolism, which will heighten tensions between the United States and Russia while potentially lessening Ukraine’s isolation. This could have unpredictable effects on the war in Eastern Ukraine, simmering in an escalating daily routine of sniper and artillery fire over positions that have little changed since 2015.