America's Killer M1 Abrams Tank Now Has Its Own Shields 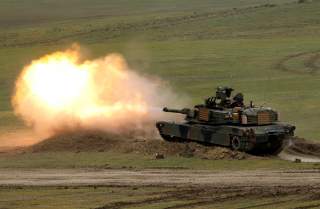 On September 28, 2017 the U.S. Army announced that it would equip the M1A2 SEP V2 Abrams tanks of one of its armored brigades with Israeli-built Trophy Active Protection Systems (APS). Or to put it in plain speech: some of America’s 70-ton main battle tanks will now have radar-guided robotic shotguns that can shoot down incoming missiles.

The deployment of Trophy-equipped Abrams tanks was done as an “urgent operational order” to upgrade a specific unit. This unit will be deploying by 2020 to one of the armored brigades rotating for service in Europe, meant to reassure NATO allies wary of potential Russian armored incursions in the Baltics.

The Trophy kits straps on a number of phased-array radar panels to a tank, providing 360 degree coverage. When the radars detect an incoming projectile, one of two Trophy launchers automatically swivels around and fires a shotgun spray of Explosively-Formed Penetrator pellets towards the rocket or missile as soon as its enters range. The blast is likely to detonate shaped-charge warheads before they impact the armor, or deflect them off course. This ‘hard kill’ defensive system can respond in a fraction of a second, and can even angle upwards to intercept attacks coming from above. While early models of Trophy were depleted after firing, later variants come with auto-loaders that could offer extended protection.

To top it off, the Trophy system alerts the crew as to the origin point of the projectile and notifies nearby units as well via datalink, allowing for rapid counterfire, effective defensive maneuvers, and even casualty evacuation should the system fail. Furthermore, the crew can designate “safe zones” around the tank in which the Trophy system won’t fire so as not to harm nearby friendly troops.

Israel developed the Trophy system after its legendarily tough Merkava tanks received a bloody nose from long-range anti-tank missiles in a war against Hezbollah in 2006. Out of around fifty tanks hit by missiles, twenty-one were penetrated and six destroyed. This led Israel to rush out the Merkava IVM Windbreaker variant equipped with Trophy.

In a 2014 conflict with Hamas, the Trophy system repeatedly shot down at least a dozen incoming rocket-propelled grenades, Konkurs and Kornet-E anti-tank guided missiles. You can see some of the intercepts in this video.

Though the IDF suffered relatively heavy losses in personnel, not a single IDF tank protected by the APS system was hit.

Trophy can also be applied to lighter vehicles, significantly boosting their protection versus rockets without having to bolt-on literally tons of add-on armor. Israel has already installed the system on heavy Namer armored personnel carriers as well as lighter vehicles. The U.S. Army is testing a variant on JLTVs (a Humvee replacement) and may consider installation of the smaller Trophy MEV on its Bradley infantry fighting vehicles and Stryker wheeled APCs. The 1,100 pound variant boasts a new laser-jamming “soft kill” countermeasure.

A U.S. armored brigade typically has two armored battalions with forty-four tanks each. The Trophy kits reportedly cost about $350,000 per tank, while the Army contract to install them is valued at $10 million. The Trophy-outfitted tanks will reportedly all be ready by March 2019 and deploy in Europe in 2020.

Photos of the Trophy-equipped Abrams in a defense brochure reveal that the APS systems appear as bulky “ears” on either side of the Abrams turret, as you can see here. Indeed, the system still adds on an extra 1,600 pounds to the M1 tank’s 69-ton weight, and has reportedly caused weight-balancing issues. Overall, however, Army testers have claimed the Trophy APS “exceeded expectations” when defending against missile attacks.

The APS system primarily intended to counter two different anti-tank weapons that have accounted for the majority of tank destroyed in the last few decades. The first danger comes from short-range rocket-propelled grenades (RPGs), which are cheap, highly portable and widely available. In the winter of 1994/1995, Chechen resistance knocked out around 60 Russian T-80 tanks and more than 100 armored personnel carriers mostly using RPGs. The Russian armor had unwisely charged down confined city streets without adequate infantry protection.

The composite armor on modern Western main battle tanks is resistant to hits from the more common RPG-7 and -16 rockets, though hits to the side or rear could still inflict damage. This led to the U.S. Army to upgrade Abrams tanks with “Urban Survival Kits” composed of add-on slat- and reactive armor on the rear and sides for urban combat operations in Iraq. Russia has also exported larger RPG systems such as the RPG-29 and RPG-32 which boast much greater penetration.

While RPGs are deadly in urban or forested battlefields, their short range of roughly 200 meters makes them of limited use in the kind of open terrain where tanks are dominant. But long-range warfare is where the more sophisticated anti-tank guided missile (ATGM) enters the picture. Unlike RPGs, the heavier ATGMs are guided towards targets that may be miles away, either using a seeker-system, laser designator, radio control, or a trailing-wire connected to the launch unit. Famous examples include the American TOW and Javelin, the Chinese Red Arrow, and Russian Malyutka, Konkurs and Kornet missiles. Rarer and more expensive than RPGs, ATGMs have nonetheless proliferated in battlefields in the Middle East and Eastern Europe, and there are numerous videos posted by insurgents depicting guided missiles sailing towards unsuspecting targets for as long as a half a minute before obliterating them in a flash of smoke and fire.

Recently, Iraq and Saudi Arabia have been losing numerous M1 Abrams tanks to laser-guided Kornet missiles. Admittedly, the export-model M1s lack the depleted-uranium armor on U.S. M1s, and the Saudi crews can be observed using poor deployment and tactics. But the problem is not confined to the M1; when Turkey deployed its German-made Leopard 2A4 tanks into Syria, ISIS destroyed ten in a surprise raid. And hundreds of Russian and Ukrainian tanks have been knocked out in the conflict in Eastern Ukraine. While tank-versus-tank encounters between Ukrainian and Russian armor account for a significant number of losses in key battles, it is safe to say the majority of armored vehicles losses were dealt by infantry anti-tank weapons.

The Trophy APS might also work against the High Explosive Anti-Tank shells fired by tanks and rounds from recoilless rifles, both of which use shaped charges warheads. However, Trophy does not generate enough energy to stop kinetic armor-piercing shells, which are generally preferred in tank-versus-tank engagements.

Options for the Future

This decision to outfit a single armored brigade has been miscast by some sources as indicating that the U.S. Army has committed itself to upgrading its entire fleet of Abrams tanks the Trophy system, but this has yet to be the case. The Army is reportedly still testing three additional Active Protection Systems for use on its light and medium armored vehicles: the Israeli Iron Fist, the American Iron Curtain and the German Active Defense System. There seems to be little mention of an earlier system offered by Raytheon called Quick Kill.

Despite Trophy’s ready availability for over a decade and proven track record, the Army has been slow to adopt it due to fear that the automated shotgun blasts could injure or kill nearby infantry. This is why the Pentagon continues to systems such as Quick Kill and the Israeli Iron Fist, which attempt to shoot down incoming projectiles with their own low-fragmentation, or even non-explosive missiles further away from the tank, minimizing the risk of collateral damage. Time will tell how satisfying these systems will prove—though hopefully, not too much more time, as Trophy APS has already been available for a decade and is not prohibitively expensive.

Just as guided anti-tank missiles have multiplied across the world, so have Active Protection Systems. Moscow has boasted loudly about the T-14 Armata tank’s Afghanit APS, which it claims can also deflect kinetic anti-tank shells. In September 2017, China unveiled its first-ever Active Protection system, the GL5. Furthermore, both Iron Fist and ADS are being considered for installation on a variety of European armored vehicles.

This is happening because there is good reason to believe that APS systems will significantly increase armored vehicle survivability at a reasonable cost in weight and money. There are many expensive military systems which never see use in action, but if U.S. tanks see combat in the next decade, they are almost certain to be targeted by anti-tank rockets and missiles. Going by the IDF’s experience, they would be significantly more likely to avoid losses if equipped with their own Active Protection systems. Furthermore, such protection would be useful both in high-intensity conflicts against peer-opponents as well as counter-insurgency and operations in urban terrain.