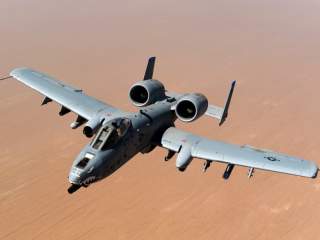 The U.S. Air Force has reportedly decided to temporarily call off its campaign to retire the long-serving Fairchild Republic A-10 Thunderbolt II close air support aircraft. The service finally relented because the Warthog is in high demand fighting the Islamic State terrorist entity in Iraq and Syria.

With its distinctive, even ungainly design, the Warthog is nonetheless beloved by U.S. ground forces who have come to rely on the low flying jet to provide air cover during battles with militants in Iraq and Afghanistan. But the Air Force was—until recently—trying to retire the jet in favor of the stealthy, supersonic Lockheed Martin F-35 Joint Strike Fighter.

“It appears the Administration is finally coming to its senses and recognizing the importance of A-10s to our troops’ lives and national security. Since before I took office and after, I’ve consistently highlighted the A-10’s irreplaceable capabilities and worked to expose the Administration’s flawed argument for wanting to retire it prematurely,” Rep. Martha McSally (R-AZ)—a former A-10 squadron commander and current member of  the House Armed Services Committee—said in a statement. She added:

“With A-10s deployed in the Middle East to fight ISIS, in Europe to deter Russian aggression, and along the Korean Peninsula, Administration officials can no longer deny how invaluable these planes are to our arsenal and military capabilities. But our fight does not end here. The Administration has been persistent in its efforts to send our best close air support asset to the boneyard without a replacement. That’s unacceptable, and I’ll continue to lead the fight to ensure we keep these planes flying until we know without a doubt we can replace their capabilities.”

Air Force sources said that there are certain missions that only the Warthog can perform. Those missions include attacking the enemy in “danger close” situations in close proximity to friendly ground forces and providing overwatch for search and rescue missions. Nor does the Air Force have another weapon that could eliminate enemy tanks from the air as efficiently as the Warthog. The A-10 was originally designed during the Cold War to counter an armored Soviet juggernaut pouring through the Fulda Gap in Germany. Indeed, the Pentagon conceded those points during an April 2015 Congressional hearing.

Despite explicit instructions from the U.S. Congress to keep the jet in service, the Air Force has gone to great lengths to rid itself of the A-10. The service’s campaign went so far as to leak doctored civilian casualty numbers caused by A-10 sorties, according to one report. Moreover, according to defense sources, the Pentagon has been designing a series of close air support comparison tests between the A-10 and the F-35 that were effectively rigged in favor of the Joint Strike Fighter.

But with combatant commanders demanding the A-10’s services in Iraq, Syria, Korea and even Europe, the Air Force has been forced temporarily halt its crusade. The first hints of such a move came late last year. “I think moving it to the right and starting it a bit later and keeping the airplane a bit longer is something to consider, based on things as they are today and what we see in the future,” Air Combat Command commander Gen. Hawk Carlisle told reporters on Nov. 10. “Eventually we will have to get there. We have to retire airplanes.”

Senate Armed Service Committee chairman Sen. John McCain (R-AZ) also applauded recent reports that the Air Force is deferring its quest to retire the A-10. “I welcome reports that the Air Force has decided to keep the A-10 aircraft flying through fiscal year 2017, ensuring our troops have the vital close-air support they need for missions around the world,” McCain said in a statement. He added:

“Today, the A-10 fleet is playing an indispensable role in the fight against ISIL in Iraq and assisting NATO’s efforts to deter Russian aggression in Eastern Europe. With growing global chaos and turmoil on the rise, we simply cannot afford to prematurely retire the best close air support weapon in our arsenal without fielding a proper replacement.”

McCain noted, however, that the Air Force has not officially stated that it’s backing off from retiring the A-10. “When the Obama Administration submits its 2017 budget request in the coming weeks, I hope it will follow through on its plan to keep the A-10 flying so that it can continue to protect American troops, many still serving in harm’s way.”

Indeed, until the president submits its fiscal year 2017 budget request to Congress in February, the Pentagon will not comment officially on the matter.