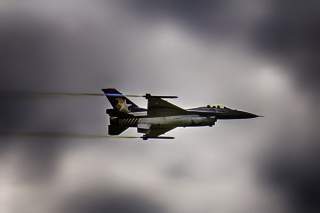 For decades the Lockheed Martin F-16 Fighting Falcon—more popularly know as the “Viper”—has dominated the fighter market around the globe. But while the F-16 is still one of the best fourth-generation fighters money can buy, the production line is starting to slow as sales dry up. Ironically, the F-16 is not losing market share to foreign competitors, rather the venerable jet is being supplanted by Lockheed’s own F-35 Joint Strike Fighter as the stealthy fifth-generation jet gears up for full-rate production.

But the F-16 still has a few years of production left—the current order backlog extends to late 2017. The order book will probably grow somewhat as the United Arab Emirates (UAE) looks set to purchase thirty more advanced F-16E/F+ Block 61 jets. Other than the UAE, Lockheed still has a chance to sell the jet in several other markets. The most immediate prospect is Indonesia—which already operates the older F-16A version of the jet.

However, the F-16 faces stiff competition in Indonesia—which needs to replace its geriatric Northrop F-5E/F Tiger II fighters. The Russians are offering the extremely capable Sukhoi Su-35 Flanker-E, which in many respects is a more capable aircraft. Other potential contenders include the Saab JAS-39 Gripen, Eurofighter Typhoon and the French-made Dassault Rafale. The Russians appear to have the inside track since Jakarta appears to have already selected the Su-35— according to Indonesian media quoting that nation’s defense minister, Ryamizad Ryacudu. However, the Russians have not confirmed that a deal is imminent.

That could explain why Lockheed was showing off a new F-16V version of its jet to Indonesia during the first week of October.  Clearly, the Obama Administration and the U.S. defense giant hold out hope that it can persuade Indonesia to buy new F-16s. Indeed, Washington is offering one of the most advanced variants of the venerable jet to the Southeast Asian nation. While the F-16V does not have all of the gold-plated bells and whistles found on the UAE’s fleet of Desert Falcons, the new Viper variant is a very potent aircraft.

At the heart of the new F-16V is the addition of an active electronically scanned array (AESA) radar—the Northrop Grumman APG-83. Taiwanese jets are already being equipped with the APG-83 and the U.S. Air Force’s Air National Guard has specifically requested that radar for an urgent operational need. The APG-83 shares software and components with the F-22’s APG-77 and F-35’s APG-81 radars—which is a distinctive advantage for Northrop.

The V-model—which originally started off as Lockheed’s entry for the U.S. Air Force’s now defunct Combat Avionics Programmed Extension Suite F-16 upgrade program—also incorporates a host of other improvements. Those include modern commercial off-the-shelf (COTS)-based avionics, a large-format, high-resolution displays and a high-volume, high-speed data bus among other items. The U.S. Air Force version also included a new upgraded electronic warfare suite, but it is unclear if foreign jets will be equipped with the same system.

But even if Indonesia does not buy the F-16V, the Viper will remain in service for decades to come. The U.S. Air Force will retain a substantial fleet of F-16s for years and those aircraft will need to be upgraded at some point. Moreover, not every nation that operates the F-16 will be able to afford the F-35—or even be allowed to buy it. Israel, for example, is already lobbying to make sure its Arab neighbors—many of whom also operate versions of the F-16—will not be allowed to buy the stealth new jet. That means there might be opportunities for more sales down the line.

But even as the F-16 production line eventually shuts down, it’s not the end of the Viper’s story. The next phase of the aircraft’s service life will be upgrades and sustaining the thousands of jets that are already in the field. There is also a very significant second-hand jet market out there for refurbished fighters. It’s not a question of if these nations are going to upgrade their jets, it’s a question of when and how much. It’s a vast and largely untapped market.