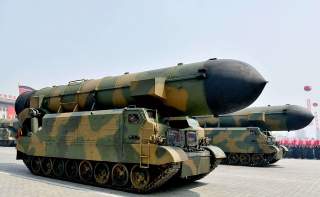 The conventional wisdom used to be that once an intercontinental ballistic missile shoots off from its silo into the exosphere, the best you could do was brace yourself for a mushroom cloud. There was simply no defense that could conceivably shoot one down.

However, the United States today possesses a potential ace in its hand to defeat such an attack—or, more precisely, thirty-six aces. Were North Korea to fling a ballistic missile across the Pacific Ocean aimed at the continental United States, then the U.S. Missile Defense Agency’s Ground-based Midcourse Defense (GMD) interceptors would attempt to knock them out of the sky.

The GMD system’s ability to potentially destroy an ICBM is exceptionally rare. But Washington shouldn’t grow overconfident about its ballistic-missile shield: it is only designed to protect against very limited-scale attacks. Furthermore, the interceptors so far have, when tested, only hit their targets about half the time.

Back in the 1980s, Reagan envisioned developing a comprehensive missile shield that would protect America from attack. However, the “Star Wars” Strategic Defense Initiative ran into the problem that it was expensive to improve a defensive system, and relatively cheap to improve ICBMs with decoys and multiple independently targetable reentry vehicles to overwhelm the defenses.

By the 1990s, a less ambitious idea known as Global Protection Against Limited Strikes had emerged. The Pentagon recognized it could not develop a defensive system that could handle the massive numbers of nuclear missiles in the Russian and Chinese arsenals. The new idea was to develop a much more limited defense in the event that the so-called rogue nations of the day—Iran, Iraq and North Korea—threatened the United States with a small number of domestically produced ballistic missiles. This developed into the prototype National Missile Defense system.

In 2001, the George W. Bush administration committed itself fully to the thinking behind NMD, announcing the United States’ withdrawal from the 1972 Anti-Ballistic Missile treaty—which had limited the deployment missile defense for the fear they would lead to an ever-escalating arms race—and created a new Ballistic Missile Defense Agency. NMD was renamed to its current GMD acronym, and rushed into production at the expense of the usual testing and procurement process.

The majority of missile defenses system today, including the THAAD system deployed to South Korea, are “terminal approach” defenses that can only shoot at ballistic missiles once they begin their descent towards the target. Unfortunately, larger, higher-flying intercontinental ballistic missiles (ICBMs) may simply move too fast on their descent for these systems to hit them. Furthermore, terminal-approach defenses can only protect a limited geographic area.

GMD is one of only two operational midcourse ballistic-missile interceptors that can tackle ICBMs; the other is the Israeli Arrow-3. A midcourse intercept can take out ballistic missiles in the exosphere—after they have expended their rocket fuel, but before they have begun their descent on the target. This allows the GMD interceptors to provide continent-wide defense and affords the defenders up to twenty minutes’ time to intercept the incoming ICBMs.

The present GMD system is based on several dispersed components. First, satellite-based infrared sensors detect the heat flash from the launch of ICBMs from orbit, and cue ground-based surveillance radars to track their trajectory. A ground-based battle-management center gathers sensor data from various sources and can ready the interceptors for launch. The interceptors will be guided towards their target by a precise X-Band targeting radar. Currently, the radar in question is a truly bizarre-looking Sea-based X-Band radar that floats atop a massive 115-by-85-meter submersible platform. Mounted atop it is the largest X-Band radar ever.

A sixty-foot-long GMD interceptor soars towards the ICBM powered by a three-stage solid fuel rocket, at speeds approaching four miles a second. Once all three rockets have exhausted their fuel, a 164-pound Exoatmospheric Kill Vehicle detaches from the booster. The EKV mounts small maneuvering thrusters to precisely guide itself onto a collision course with the incoming ballistic missile. The resulting impact at enormous speeds suffices to annihilate an ICBM.

This is known as “hit-to-kill” technology, because the GMD interceptors economize on weight by doing away with explosive warheads. However, due to the absence of a blast effect, a hit-to-kill missile must have very high degree of precision to ensure that it intersects in time and space with the target.

You can see a successful test interception by the GMD system here:

Currently, GMDs are stationed in two locations: thirty-two in Fort Greely, Alaska as part of the Forty-Ninth Missile Defense Battalion, and four in Vandenberg, California, in the Hundredth Missile Defense Brigade. Eight additional interceptors entering service this year should increase the total to forty-four. So far the GMD program has cost the United States nearly $41 billion as of 2017, and each interceptor is estimated to cost $75 million each.

A third launch site may eventually be deployed in the eastern United States—either in Ohio, Maine, Michigan or New York—at an estimated cost of $3.5 billion. A decade ago there were plans to deploy a GMD battery to Poland to protect against potential Iranian missile attacks. However, this elicited such strident complaints from Moscow and lukewarm reception in Europe that these plans were abandoned.

This is the key fact to grasp about the GMD: it is virtually useless in protecting against a mass nuclear strike from Russia or China . . . and was never intended to so in the first place.

The United States will soon possess exactly forty-four GMD interceptors. In the event of a conflict with Russia, if every single defense missile successfully intercepted an incoming ICBM—which seems unlikely for reasons soon to be discussed—that would simply leave Russia with “only” around 280 more land-based ICBMs to wipe out U.S. cities and military bases. And that’s not even taking into account the submarine-launched missiles.

To be fair, GMD might suffice remove from the table the option for major adversaries to launch a “limited” nuclear strike—for example, destroying a single city as a form of threat communication. This could be a mixed blessing, because it increases both the chance that an adversary might not attempt a nuclear attack at all, as well as the possibility that they choose to escalate from a limited to a full-scale missile barrage.

So which potential U.S. adversaries actually possess a ballistic-missile arsenal small enough that GMD provides a sure defense? Iraq is no longer a threat (if it ever was), and Iranian rockets cannot reach all the way across Asia or Europe, let alone the Atlantic or Pacific.

There’s really only one country that GMD could prove useful against: North Korea. Pyongyang is clearly making rapid strides towards developing a missile that can cross the Pacific, but it seems unlikely to build enough to overwhelm GMD defenses.

Or at least so one hopes—which brings us to the not very trivial issue of accuracy and reliability. There have been a total of seventeen test intercepts using some form of the GMD interceptors, the first dating back to 1996. Only nine have been successful. This equates to a 53 percent success rate.

Now, it would be reasonable to suppose that many of the failures came during the prototype stages of the GMD tests, and since then the bugs have been ironed out. But actually, three of the four last interception tests, which took place between 2010 and 2014, have failed.

Non-interception tests have a better track record, but even so, the last non-intercept test in January 2016 also had a malfunction in one of the four rocket thrusters, causing it to go off course by a distance “20 times greater than expected.” The cause was apparently a circuit board malfunction possibly struck by a loose object. Troublingly, the Missile Defense Agency mischaracterized this test as a success, even though the malfunction would have clearly prevented the missile from hitting an actual target under operational conditions.

Many of the GMD interceptor failures are due to mechanical breakdowns and software errors. If the causes of those breakdowns can be corrected, perhaps the success rate would rise. However, the Los Angeles Times reports that there are no plans to upgrade the earlier generation interceptors, which failed to work! Furthermore, new model interceptors are being produced for operational use without undergoing testing.

Finally, analysts argue that the tests are being performed under ideal conditions: only one missile at a time approaching from an anticipated direction without use of decoys and countermeasures. If the missiles fail under these conditions, they may perform even worse when used under more realistic conditions..

These critics of the GMD system and its poor track record include the Government Accountability Office, the Union of Concerned Scientists and the National Academy of Sciences.

Consider, then, what you would do if you were sitting in the GMD battle-management center confronted by several potentially city-ending blips on the radar. Do you entrust the survival of Los Angeles to a single missile, which has a success rate little better than calling “heads” when flipping a coin?

Of course not! In the event of an attack, multiple missiles would be launched to ensure a kill. But how many? If we stick to a hypothetical 50 percent success rate, then two missiles would give a 75 percent chance of success—still not odds one would happily accept when the lives of four million people are on the line. Of course, three missiles would improve the odds of success to 87 percent, and so forth. Indeed, the L.A. Times reports the U.S. military would consider firing four or five interceptors against a single incoming warhead.