Is America's Most Advanced Submarine about to Become a 'Nuclear Bomber'? 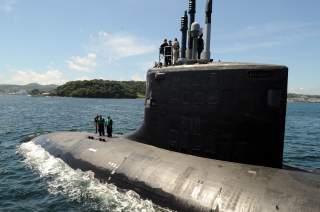 The Navy’s Director of Undersea Warfare told Congress that a new nuclear-armed submarine launched cruise missile would be fired from Virginia-class attack submarines, marking a shift for the historically conventionally-armed attack submarines into a nuclear deterrence role.

“While Virginia-class submarines can use conventional deterrence to keep adversaries in check, a sub-launched cruise missile with a nuclear warhead would be incorporated into Virginias and give national command authority additional escalation control,” Rear Adm. John Tammen, Director, Undersea Warfare Division, told lawmakers.

The emerging weapon, called for in the current administration’s recent Nuclear Posture Review, is intended to bring new elements to the Pentagon’s current nuclear weapons deterrence posture. With the current status quo, only larger ballistic missile submarines, such as the Ohio class and emerging Columbia-class, are equipped to fire nuclear weapons, such as the Trident II D5.

“Because of its stealth, the submarine provides unique intelligence and warning as well as ISR type data. Without this, the crew is less informed moving forward which provides additional strategic risk,” he said.

Small, agile high-tech attack submarines are able to approach high threat areas due to on-board sonar and other quieting technologies. These undersea platforms are, in many cases, able to access high-risk areas and coastal regions not typically reachable by surface ships. This enables Navy forces to assess enemy defenses, conduct reconnaissance and even launch attacks while less detectable to enemy forces.

Given this scenario, bringing a nuclear deterrence option to these submarines could enable commanders to hold more areas at risk of nuclear strike from closer-in proximity, thereby strengthening the threat posture.

These advantages are enhanced by recent undersea technical innovations, which have been underway and tested as prototypes for many years. Some of them are now operational on the USS South Dakota, a new fast-attack submarine which entered service last year. Senior Navy technology developers have, in a general way, told Warrior Maven that the advances in undersea technologies built, integrated, tested and now operational on the South Dakota include quieting technologies for the engine room, a new large vertical array and additional "quieting" coating materials for the hull.

The USS South Dakota was christened by the Navy last Fall at a General Dynamics Electric Boat facility in Groton, Ct.

In recent years, the Navy has been making progress developing new acoustics, sensors and quieting technologies to ensure the U.S. retains its technological edge in the undersea domain – as countries like China and Russia continue rapid military modernization and construction of new submarines.

Described as a technology insertion, the improvements on the USS South Dakota will eventually be integrated on board both Virginia-Class submarines and the now-in -development next-generation nuclear-armed boats called the Columbia-class.

Citing concerns related to the current fast-changing global threat environment, Pentagon leaders and many lawmakers see a need for these additions to the US nuclear arsenal.

A nuclear-armed sea-launched cruise missile and the modification of a small number of existing submarine launched ballistic missile warheads to provide a low-yield option – will enhance deterrence by ensuring no adversary under any circumstances can perceive an advantage through limited nuclear escalation or other strategic attack,” Gen. Paul Selva, Vice Chairman of the Joint Chiefs of Staff, told reporters during a recent Pentagon briefing.

“The use of WMD is unfortunately becoming more and more common-place. Low barriers, and in some cases, no barriers to entry, should force us to continually review and evaluate our programs, policies, and activities designed to counter and mitigate these threats across the WMD spectrum,” Rep. Elise Stefanik (R-NY), Chairwoman of the House Armed Services Subcommittee on Emerging Threats and Capabilities, said in her opening statement at a recent hearing.

Defense Secretary James Mattis and other senior leaders seem aware that elements of the NPRs strategic approach may reflect a particular irony or paradox; in response to questions from lawmakers about whether adding new low-yield nuclear weapons could “lower the threshold” to nuclear war and therefore introduce new elements of danger, Mattis told Congress that increasing offensive nuclear-weapons attack capability will have the opposite effect, meaning the added weapons would improve deterrence and therefore enhance prospects for peace.

Citing the rapid technological progress of adversary air-defense systems, Mattis further elaborated that a sea-launched cruise missile option might be necessary to hold potential enemies at risk in the event that air-dropped low-yield weapons were challenged to operate above necessary targets.

“To drop a gravity bomb that is low-yield means a bomber would have to penetrate air defenses. Air defenses are very different than they were 20 years ago,” Mattis told Congress.

Senior Pentagon leaders stress that neither of these new nuclear weapons recommendations in the NPR require developing new nuclear warheads or will result in increasing the size of the nuclear stockpile. NPR DoD advocates further stress that the addition of these weapons does align with US non-proliferation commitments.