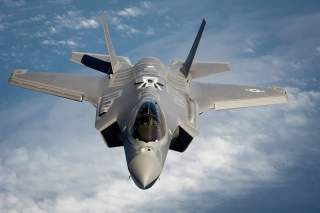 The Pentagon has completed the third and final developmental flight test for the B61 Mod 12 aircraft-delivered thermonuclear bomb. Unlike previous American nuclear bombs, the new B61-12 is designed for high accuracy using inertial guidance but low yields—which is hoped will give the weapon better overall performance.

“This demonstration of effective end-to-end system performance under representative delivery conditions marks another 2015 achievement in the development of the B61-12 Life Extension Program,” said National Nuclear Security Administration deputy administrator Madelyn Creedon in a statement. “Completing this guided B61-12 flight test provides additional evidence of the nation's continued commitment to our nation’s security and that of our allies and partners.”

All though the U.S. Air Force and the NNSA completed this last flight test on Oct. 20, 2015, at the Tonopah Test Range in Nevada, the Defense Department didn’t announce the successful completion of the trials until Nov. 16. During the test, a U.S. Air Force F-15E from Nellis AFB, Nevada—most likely the 53d Test and Evaluation Group—dropped the “B61-12 test asset and it demonstrated successful performance in a realistic guided flight environment.”

Depending on the exact delivery profile, that might have entailed a shallow dive to accelerate to delivery speed as the jet passes the target and then pulling into the vertical. The jet would have released the bomb just it passed the vertical—tossing the bomb high into the air and back toward the target—while the F-15E escapes blast area. Sources are understandably squeamish talking about the topic—pilot’s refer to the technique as the “idiot’s loop”— but one Strike Eagle pilot said the jet will hit speeds of around Mach 1.6—which is it’s maximum speed with conformal fuel tanks when flying those profiles. The bomb itself can be released at speeds around Mach 2.0.

The NNSA stated that initial indications showed the test was successfully and that telemetry, tracking and video data were all properly collected. “This test provides additional confidence in the weapon system and instrumentation designs prior to authorizing Phase 6.4, Production Engineering, in 2016,” the agency stated.

According to the NNSA, the B61-12 flight test hardware included parts designed by the Sandia National and Los Alamos National Laboratories. Those are components are manufactured by the National Security Enterprise Plants. The B61-12’s tail kit is designed and built by Boeing under a contract with Air Force Nuclear Weapons Center.

The tail-kit is derived from Boeing’s Joint Direct Attack Munition weapon system—which consists of a tail-kit assembly section and bolt-on stakes. While the B61-12 was originally believed to utilize the Global Positioning System to enhance accuracy, the NNSA explicitly states that is not true. “Although the tail-kit assembly guided the test unit, the B61-12 nuclear weapon will have no additional capabilities from the legacy B61 nuclear weapons and is not GPS-guided,” the NNSA stated.

(Recommended: How Germany Could Have Won World War I)

However, it should be noted that while JDAMs are often described in the media as “satellite-guided bombs”—the weapons actually use inertial guidance with GPS positional corrections. Thus the lack of GPS capability would only slightly reduce the accuracy of the B61-12.  Indeed, during the initial phase of Operation Iraqi Freedom, the U.S. Air Force used JDAMs to eliminate Saddam Hussein’s GPS jammers with negligible impact of the weapons’ accuracy.

While the B61-12 has a maximum yield of only 50KT and is a relatively low powered weapon compared to previous versions of weapon—indeed, it can be dialed back to 0.3KT if need be—the increased accuracy makes it more effective. By some estimates, the inertial guidance kit would increase the weapon's capability to a level similar to the now retired 360KT B61-7 or the 400KT B61-11 while reducing casualties.

Some have argued that would make it more palatable to use those weapons operationally. “Warplanners and adversaries could see such nuclear weapons as more useable allowing some targets that previously would not have been attacked because of too much collateral damage to be attacked anyway,” wrote Hans Kristensen of the Federation of American Scientists. “This could lead to a broadening of the nuclear bomber mission, open new facilities to nuclear targeting, reinvigorate a planning culture that sees nuclear weapons as useable, and potentially lower the nuclear threshold in a conflict.”

The NNSA also took pains to stress that the B61-12 does not violate any treaties and does not add to existing nuclear capabilities—other than increased accuracy. “This development flight test asset contained representative non-nuclear components but no highly enriched uranium or plutonium, consistent with test treaty obligations,” NNSA states.  “The B61-12 LEP refurbishes both nuclear and non-nuclear components to extend the bomb’s service life while improving its safety, security and reliability. The LEP will reuse or remanufacture existing components to the maximum extent possible. With the incorporation of an Air Force provided tail-kit assembly, the B61-12 will replace the existing B61-3, -4, -7, and -10 bombs.”

Nonetheless, many arms control experts are concerned about the new weapon and the capabilities it brings—particularly since the B61-12 will be integrated onto the stealthy F-35 Joint Strike Fighter. That might also provoke a Russian response.

“If the Russians put out a guided nuclear bomb on a stealthy fighter that could sneak through air defenses, would that add to the perception here that they were lowering the threshold for the use of nuclear weapons?” Kristensen told the Center for Investigative Reporting’s Reveal magazine. “Absolutely.”