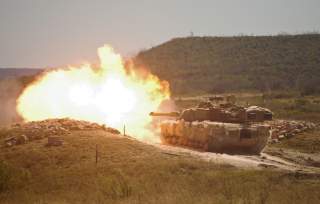 While Army officials explain that many of the details of the next-gen systems for the future tanks are not available for security reasons, Basset did explain that the lethality upgrade, referred to as an Engineering Change Proposal, or ECP, is centered around the integration of a higher-tech 3rd generation FLIR – Forward Looking Infrared imaging sensor.

The advanced FLIR uses higher resolution and digital imaging along with an increased ability to detect enemy signatures at farther ranges through various obscurants such as rain, dust or fog, Bassett said.

“You do not have to manually put meteorological variables into the fire control system. It will detect the density of the air, relative humidity and wind speed and integrate it directly into the platform,” Basset explained.

The emerging M1A2 SEP v4 will also be configured with a new slip-ring leading to the turret and on-board ethernet switch to reduce the number of needed “boxes” by networking sensors to one another in a single vehicle. Also, some of the current electronics, called Line Replaceable Units, will be replaced with new Line Replaceable Modules including a commander’s display unit, driver’s control panel, gunner’s control panel, turret control unit and a common high-resolution display, information from General Dynamics Land Systems states.

The latter round was introduced in 1993 to engage and defeat enemy helicopters, specifically the Russian Hind helicopter, Army developers explained.  The MPAT round has a two-position fuse, ground and air, that must be manually set, an Army statement said.
The M1028 Canister round is the third tank round being replaced. The Canister round was first introduced in 2005 by the Army to engage and defeat dismounted Infantry, specifically to defeat close-in human-wave assaults. Canister rounds disperse a wide-range of scattering small projectiles to increase anti-personnel lethality and, for example, destroy groups of individual enemy fighters.
The M908, Obstacle Reduction round, is the fourth that the AMP round will replace; it was designed to assist in destroying large obstacles positioned on roads by the enemy to block advancing mounted forces, Army statements report.
AMP also provides two additional capabilities: defeat of enemy dismounts, especially enemy anti-tank guided missile, or ATMG, teams at a distance, and breaching walls in support of dismounted Infantry operations

Bassett explained that a new ammunition data link will help tank crews determine which round is best suited for a particular given attack.

“Rather than having to carry different rounds, you can communicate with the round before firing it,” Bassett explained.

Some of the upgrades woven into the lethality enhancement for the M1A2 SEP v4 have their origins in a prior upgrades now underway for the platform,

Accordingly, the lethality upgrade is designed to follow on to a current mobility and power upgrade referred to as an earlier or initial ECP. Among other things, this upgrade adds a stronger auxiliary power unit for fuel efficiency and on-board electrical systems, improved armor materials, upgraded engines and transmission and a 28-volt upgraded drive system.  This first ECP, slated to begin production by 2017, is called the M1A2 SEP v3 variant.

This ECP 1 effort also initiates the integration of upgraded ammunition data links and electronic warfare devices such as the Counter Remote Controlled Improvised Explosive Device – Electronic Warfare – CREW. An increased AMPs alternator is also part of this upgrade, along with Ethernet cables designed to better network vehicle sensors together.

The Army is fast-tracking an emerging technology for Abrams tanks designed to give combat vehicles an opportunity to identify, track and destroy approaching enemy rocket-propelled grenades in a matter of milliseconds, service officials said.

The Army is looking at a range of domestically produced and allied international solutions from companies participating in the Army's Modular Active Protection Systems (MAPS) program, an Army official told Scout Warrior.

Using a 360-degree radar, processor and on-board computer, Trophy is designed to locate, track and destroy approaching fire coming from a range of weapons such as Anti-Tank-Guided-Missiles, or ATGMs, or Rocket Propelled Grenades, or RPGs.

Along with Rafael's Trophy system, the Army is also looking at Artis Corporation's Iron Curtain, Israeli Military Industry's Iron Fist, and UBT/Rheinmetall's ADS system, among others.

Overall, these lethality and mobility upgrades represent the best effort by the Army to maximize effectiveness and lethality of its current Abrams tank platform. The idea is to leverage the best possible modernization upgrades able to integrate into the existing vehicle. Early conceptual discussion and planning is already underway to build models for a new future tank platform to emerge by the 2030s – stay with Scout Warrior for an upcoming report on this effort.