America's Postal Service Is Dying a Slow and Painful Death 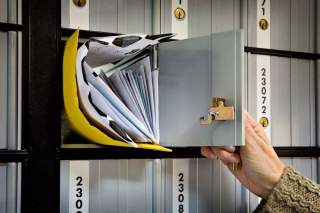 It’s no secret that the postal business is shrinking. First-class mail volume is melting away like a popsicle in the sun—down 40 percent since 2000.

Less well-known is the shrinkage of the U.S. Postal Service’s board of governors. It is supposed to have nine members (not counting the postmaster general and deputy postmaster general). At the moment, it’s down to one.

At first blush, this May sound like good news for those who think the Postal Service is a government-run dinosaur that should be dismantled or sold off. What better start than to eliminate the board? But on closer look, this postal decapitation is not a solution to USPS’ shortcomings, but a stark illustration of the problems with this government-owned enterprise.

The postal board of governors is far more than an advisory council for USPS. The board—which by law cannot have more than five members of one party—is integral to the operation of the Postal Service. The board has ultimate control over everything from postage rates to executive compensation, providing experience and views from outside the often insular postal culture.

Since 2010, the last time the board was fully staffed, these functions have been exercised by an increasingly lonely set of individuals. Since December of last year, the sole independent member has been James Bilbray, a former congressman from Nevada. Six more presidential nominees, including Jim Miller, former postal board chairman and Ronald Reagan budget director, are on hold.

The nominations have reportedly been frozen in place by a “hold” placed by Sen. Bernie Sanders, I-Vt. The reasons for Sander’s hold aren’t entirely clear. One explanation is that the senator is trying to stop the closure of a large postal facility in Vermont. Some have raised more specific objections: One civil rights advocacy group, for instance, objects to Barnett because he formerly represented payday lenders. Miller’s renomination has engendered opposition because he is a “notorious privatization advocate.”

On the GOP side of the Senate, Sen. Susan Collins, R-Maine, has objected to the “intemperate and unhelpful reaction of the board” to postal reform legislation passed by the Senate.

Whatever the reason for the vacancies, this is no way to run a railroad—or a post office. As Sen. Tom Carper, D-Del., remarked last month, “I can’t imagine something like this ever occurring in the private sector because shareholders would demand oversight from a strong board to protect their investment.”

Exactly. If the Postal Service is to survive, it needs to be run like a private business. But the empty boardroom at USPS shows how far it is from that goal.

It may be formally an independent entity within the federal government (at least since 1970 when the postmaster general was kicked out of the cabinet), but it still ultimately is still subject to political forces rather than the market forces. Unless that is changed, and the organization made truly independent, USPS’ odds of survival will grow ever dimmer.