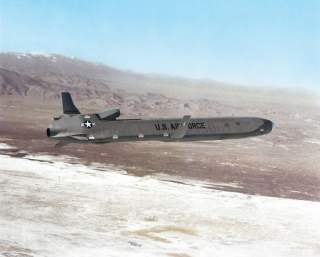 There is a growing controversy in Washington over the Pentagon’s plans to develop a new nuclear-armed cruise missile.  The new missile, termed the Long Range Stand Off weapon (LRSO), is intended to replace the Air Force’s existing air-launched cruise missile (ALCM) that currently equips its B-52 strategic bombers.  The initiative is part of the Obama administration’s broader plans to recapitalize the nation’s triad of strategic nuclear delivery systems consisting of land-based intercontinental ballistic missiles, submarine-launched ballistic missiles, and manned bombers over the next three decades.

The ALCMs first entered service in the early 1980s as part of an effort to prolong the life of the 1960s-era B-52s, which were no longer survivable in contested air space.  With a range of 1,500 miles, the ALCMs could be launched by the ageing bombers from well outside the reach of Soviet air defenses.  While the service life of these missiles has been extended through refurbishment programs over the last twenty-five years, the Air Force has stated that they will have to be retired by 2030.  The LRSO will then be needed as a replacement if the U.S. is to maintain its nuclear stand-off capability.

The debate about the LRSO centers on the question of whether or not such a capability is necessary or appropriate.  Opponents argue that dual-use cruise missiles capable of delivering either conventional or nuclear weapons are fundamentally destabilizing.  Once one is fired, it would be impossible for an opponent to know what kind of warhead it is carrying.  Under such circumstances, an adversary might assume the missile to be nuclear-armed and decide to respond in kind.  Arms control advocates say that it therefore makes sense to not only abandon plans to develop the LRSO but to go ahead and dismantle the existing arsenal of ALCMs as well.  Many believe that by doing so the U.S. could set a precedent for a global ban on such weapons.

However, these arguments are problematic.  If dual use cruise missiles are destabilizing, then so are the bombers that carry them.  An adversary would have no ability to determine beforehand whether a penetrating U.S. bomber was armed with conventional or nuclear bombs.  To the extent that arms control advocates believe that dual use weapons undermine nuclear stability, it would make sense for them to call for getting rid of the bomber leg of the nuclear triad entirely.  Indeed, a thoughtful case can be made for doing so, but LRSO opponents do not make this argument.  In addition, while achieving an international ban on nuclear cruise missiles would be a worthwhile goal, canceling the LRSO program unilaterally would deprive the U.S. of a much needed bargaining chip in the negotiation process.

The controversy over the LRSO encompasses much broader issues, however.  Fundamentally, it is about the nature of nuclear deterrence and the role nuclear weapons should play in U.S. national security.  Observers on both sides of this issue agree that the U.S. will have more nuclear warfighting options if it produces the LRSO than it will if it retires the current ALCMs without replacement.  Because the new missile will be stealthier and more accurate than its predecessor, it will actually provide the U.S. with new capabilities that it does not currently possess.  Moreover, like the current ALCM, the LRSO will utilize a variable nuclear warhead whose yield can be adjusted from as high as 150 kilotons – the equivalent of 150,000 tons of TNT, or ten times the size of the Hiroshima bomb – to as low as 5 kilotons.  This “dial-a-yield” capability, combined with its more advanced features, could make the new missile seem like a relatively usable weapon.

Supporters of the LRSO believe that it is necessary for the U.S. maintain a variety of nuclear options in order to ensure the credibility of its nuclear deterrent.  There is a particular concern among many in the national security community that if the U.S. were to find itself in a conventional war with another nuclear power, its opponent could be tempted to escalate with limited nuclear strikes rather than accept defeat at the hands of the U.S. military.  According to this line of thinking, the new cruise missile can help deter such escalation by enhancing the U.S. capacity to respond with limited nuclear strikes of its own without having to resort to all out nuclear war.  In this way, LRSO supporters make a seemingly counterintuitive argument: By strengthening the U.S. ability to fight a nuclear conflict, it will actually reduce the likelihood that one will occur.

Opponents completely reject this idea, believing that the LRSO will raise the risk of nuclear war rather than lower it.  They correctly point out that there is a logical contradiction in the Pentagon’s insistence that the new missile would enhance U.S. warfighting options without lowering the nuclear threshold.  To the extent that the LRSO is seen as a more usable weapon than those carried by U.S. ballistic missiles at sea and on land (which possess much larger warheads), it is one that is therefore more likely to be used in the event of a crisis or conflict.  As a result, its critics fear that it will erode the long-standing taboo on the use of nuclear weapons and make the unthinkable seem thinkable.

Arms control advocates also emphasize that the LRSO’s development would be contrary to the Obama administration’s stated policy of reducing the nation’s reliance on nuclear weapons.  It would, in their view, signal to other countries that the world’s only superpower continues to see nuclear arms as legitimate tools of warfare and undercut U.S. efforts to promote global nuclear disarmament.  LRSO critics note that the increased accuracy of U.S. precision-guided munitions means that targets that previously could only be eliminated with nuclear weapons can now be neutralized through conventional means.  They argue that it would be better to use the funds intended for the LRSO to purchase greater numbers of conventional air-launched cruise missiles.

This debate is simply one aspect of a much larger one about the role of nuclear weapons in ensuring the security of the United States and its allies.  Those in the U.S. arms control community want to minimize that role as much as possible by limiting U.S. nuclear warfighting capabilities.  They believe this is the best way to reduce the likelihood of nuclear war.  Many arms control advocates would like to take further steps in this direction, such as abolishing all U.S. tactical nuclear weapons and delaying the introduction of the new strategic bomber.  However, there is little public appetite for such moves in light of Russian expansionism, China’s growing assertiveness in the Asia Pacific, and an increasingly belligerent North Korea.  Killing the LRSO, on the other hand, is something that is politically feasible, and that is the main reason why arms control advocates are focusing on it.

Richard Purcell is a freelance writer and a researcher at Wikistrat, Inc., a geostrategic consulting firm. He has also written for World Politics Review, the SAIS Europe Journal, and SAIS Review.  He holds a master’s degree from the Johns Hopkins School of Advanced International Studies and previously worked as a legislative staffer for Senator Richard Durbin (D-IL) for seven years. You can follow him on Twitter at @SecurityDilems