Are America and India Building an 'Aircraft Carrier' Alliance? 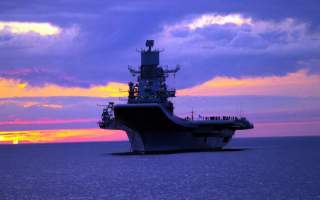 According to Indian media reports, the United States and India have entered the final stages of a negotiation for Washington to equip Delhi’s future aircraft carrier with a state-of-the-art electromagnetic aircraft launch system (EMALS). Ahead of President Donald Trump’s meeting with Prime Minister Narendra Modi this month, an eleven member U.S. delegation led by Rear Adm. Brian Antonio, the U.S. Navy's Program Executive Officer for aircraft carriers, met with Indian counterparts in western India from October 29–31. The Indian side was led by Vice Admiral DM Deshpande, Controller Warship Production and Acquisition, the Hindustan Times reported.

One of the hang ups for the agreement has been that India has insisted on using an electrical system to power its future carrier, whereas U.S. flat tops use nuclear propulsion systems. Washington appears to have relented on the issue, however. The Hindustan Times cited sources as saying “that at the meeting of the joint working group on aircraft carrier technology, the United States was ready to power the EMALS with integrated electric propulsion rather than nuclear power as the cost of latter alone is over $1 billion or Rs 6.5 thousand crore. This will involve installation of giant capacitors for storage and discharge of power.”

Electromagnetic aircraft launch systems, which are built by General Atomics, are the most advanced launch systems in the world. Indeed, America’s new Ford-class carriers utilize EMALS. Discussions about Indian carriers using EMALS dates at least as far back as 2013, and India officially requested to purchase the launch systems during the Obama administration. Deccan Chronicle, an Indian newspaper, explained Delhi’s desire for EMALS last month: “Due to its flexible architecture, EMALS can launch a wide variety of aircraft weights and can be used on a variety of platforms with differing catapult configurations.”

President Trump himself has repeatedly criticized EMALS. The first time came when the American president recounted a conversation he had with a sailor to Time magazine back in May. According to Trump, the sailor told him the EMALS wasn’t working as well as previous steam systems. “It sounded bad to me. Digital. They have digital. What is digital?,” Trump asked during the interview. “And it’s very complicated. You have to be Albert Einstein to figure it out. And I said — and now they want to buy more aircraft carriers. I said what system are you going to be — ‘Sir, we’re staying with digital.’ I said no you’re not. You going to goddamned steam, the digital costs hundreds of millions of dollars more money and it’s no good.”

Despite his personal hesitations about the launch system, Trump is likely to favor the sale to India as he has consistently promoted increasing American arms sales abroad. This has been especially true during the president’s current trip to Asia when Trump has called on Japan and South Korea to purchase more American-made systems.

The Trump administration has also made strengthening ties to India a growing priority as of late. Although President Trump isn’t scheduled to visit India during his current trip, Secretary of Defense James Mattis visited the country in September and Secretary of State Rex Tillerson followed suit a month later.

In addition, Tillerson’s most prominent speech since taking office was about improving relations with India. In the speech, which was given right before he visited India, the secretary of state declared: “But another more profound transformation that’s taking place, one that will have far-reaching implications for the next 100 years: The United States and India are increasingly global partners with growing strategic convergence.” He added: “The emerging Delhi-Washington strategic partnership stands upon a shared commitment upholding the rule of law, freedom of navigation, universal values, and free trade. Our nations are two bookends of stability — on either side of the globe — standing for greater security and prosperity for our citizens and people around the world.”

The launch system is not the only arms deal the Trump administration is eyeing with regards to India’s future aircraft carrier. In January of this year, the Indian Navy began soliciting bids from international firms for 57 carrier-based aircraft. The proposals India received were for American  F-18s, French Rafales, Swedish Sea Gripens, and Russian MiG-29Ks. The Hindustan Times said this week that “It is understood that President Trump is expected to discuss the F-18 and F-16 offer to India during his meeting with PM Modi to boost military capacities and dominance.”

The growing military sales between the United States and India are likely to come at the expense of Russia, which has traditionally served as Delhi’s primary arms patron. Between 2000 and 2016, Russia accounted for 72 percent of India’s arms imports. During that same time, India accounted for 30 percent of Moscow’s arms sales abroad. In 2012 and 2013, Russia sold India over $4 billion in weaponry, according to a report by Chatham House. Sales have dipped slightly in recent years, however. China’s increasingly sophisticated military is a major reason that India seeking out American weaponry instead of the less advanced Russian models.