Are America and Russia Headed for a Tragic Showdown in Syria? 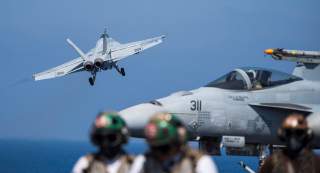 A United States Navy F/A-18E Super Hornet shot down a Syrian Arab Air Force Sukhoi Su-22 Fitter strike aircraft on June 18 over south of the Syrian town of Tabqah. But the downing of the Assad regime’s Su-22 has provoked a strong response from Moscow, which promised to treat any allied aircraft operating west of the Euphrates River as hostile.

According to U.S. Central Command, pro-Syrian government forces launched an offensive against the Syrian Democratic Forces-held (SDF) town of Ja'Din, which wounded some number of number of SDF fighters and drove the rebels from the town. Subsequently, coalition aircraft “conducted a show of force,” which halted the advance of the Syrian government forces towards Ja'Din.

After the Syrian government forces’ initial offensive, the “Coalition contacted its Russian counterparts by telephone via an established 'de-confliction line' to de-escalate the situation and stop the firing” according to a CENTCOM statement. However, Syrian government forces apparently did not heed the warning; a Syrian Su-22 conducted an airstrike on the rebel forces shortly thereafter.

“At 6:43 p.m., a Syrian regime Su-22 dropped bombs near SDF fighters south of Tabqah and, in accordance with rules of engagement and in collective self-defense of Coalition partnered forces, was immediately shot down by a U.S. F/A-18E Super Hornet,” reads a CENTCOM statement.

“The Coalition's mission is to defeat ISIS in Iraq and Syria.  The Coalition does not seek to fight Syrian regime, Russian, or pro-regime forces partnered with them, but will not hesitate to defend Coalition or partner forces from any threat.”

Russia—which is the primary backer of the Assad regime—reacted with fury.

“The destruction of the aircraft of the Syrian Air Force by the American aviation in the air space of Syria – is a cynical violation of the sovereignty of the Syrian Arab Republic,” reads a statement from the Russian Ministry of Defense.

“Numerous combat activities of the U.S. aviation carried out under the cover of ‘fight against terrorism’ aimed against the legitimate Armed Forces of a UN-member is a blatant breach of the international law and is in fact an act of military aggression against the Syrian Arab Republic.”

Moreover, while CENTCOM said that it had contacted the Kremlin’s forces, the Russians denied that they had been contacted. The Russians noted that their own aircraft were operating in the area at the time of the shoot-down.

“At that time the aircraft of the Russian Aerospace Forces were also performing combat missions in the air space of Syria. However, the Command of the coalition forces did not use the existing channels of communication between the Command of the Al Udeid Air Base (Qatar) and the Hmeymim Air Base Command to prevent air incidents in the air space of Syria,” the Russian MOD statement reads.

“The Russian party considers those actions of the U.S. Command as an intentional failure to fulfill its obligations within the Memorandum on prevention of incidents and providing of flight security during the operations in Syria dated October 20, 2015.”

In retaliation, the Russians said that they are suspending the deconfliction line with the United States military.

“Since June 19, 2017, the Russian Defence Ministry has stopped the cooperation with the American party within the Memorandum on prevention of incidents and providing of flight security during the operations in Syria and demands a thorough investigation of the incident by the U.S. Command with further providing of information on its results and the taken measures,” the Russian MOD statement reads.

Further, the Russians are promising to treat every allied aircraft flying west of the Euphrates River as hostile.

“In the combat mission zones of the Russian aviation in the air space of Syria, all kinds of airborne vehicles, including aircraft and UAVs of the international coalition detected to the west of the Euphrates River will be tracked by the Russian SAM systems as air targets,” the Russian MOD statement reads.

However, while the Russian statement is strongly worded, it is also mostly rhetoric.

Advanced Russian air defense systems in Syria—which include the powerful S-400 and S-300V4—have been tracking U.S. and allied aircraft flying over that war-torn nation for months. Moreover, the Russians worded their statement carefully—“tracked as air targets” does not mean that those “targets” will necessarily be attacked. In reality, despite the Russian statement, very little has changed in practical terms.

Even the Russian statement that they had shutdown the deconfliction line may not be entirely accurate. Speaking at the National Press Club in Washington, D.C., Marine Corps. Gen. Gen. Joe Dunford, chairman of the Joint Chiefs of Staff, indicated that the United States and Russia were still talking.

“We have an effective link between our operations center in Qatar and the Russian Federation on the ground in Syria. That link is still ongoing here this morning," Dunford said.

"When I left the building this morning, [we had] still been communicating over the last few hours.”