Are China and America Getting Ready for a War in Space? 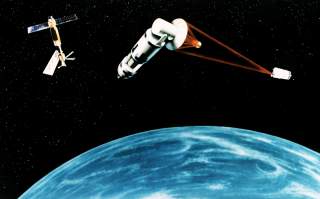 China and Russia are researching new weapons capable of crippling US satellite-based missile defenses, raising the stakes in a secretive new age arms race that will likely draw in several countries.

United States-based think tank Center for Strategic and International Studies (CSIS) and the independent research body Secure World Foundation (SWF) warned in two recent studies that there was also an increasing risk that extremist groups would deploy electronic warfare and other counter-space technologies.

The United States’ Pentagon is reportedly looking at ways of ramping up space defenses after concluding American satellites were vulnerable to attacks from China and Russia, which may have gained a recent technological edge in outer space.

Last month, US President Donald Trump called for the creation of an American “space force”, saying that “space is a war-fighting domain, just like the land, air and sea.”

China and Russia appear to be headed in the same direction. The SWF report said “China has recently designated space as a military domain, and military writings state that the goal of space warfare and operations is to achieve space superiority using offensive and defensive means.”

It added: “There is strong evidence that Russia has embarked on a set of programs … to regain some of its Cold War-era counterspace capability.”

Legal experts have launched an initiative for a code of practice that might set parameters on the use of space-based weapons that could theoretically paralyze the global economy if essential communication systems were indefinitely disabled.

Based at Australia’s University of Adelaide in collaboration with various international partner institutions, the two-year project aims to produce a so-called Woomera Manual on the International Law of Military Space Operations, named for the sprawling rocket range in South Australia that has played a leading role in Western space operations since 1967.

Melissa de Zwart, dean of Adelaide’s Law School, said war in space was not a case of “if” but “when.” “However, the legal regime that governs the use of force and actual armed conflict in outer space is currently very unclear, which is why the Woomera Manual is needed,” she added.

“The few international treaties that deal with outer space provide very little regulation of modern space activities, including both military and commercial uses of space. Therefore, we need to cast our gaze more widely in our approach to determining what laws are applicable in space,” she said.

Whether politicians have taken notice is debatable, but other similar initiatives have at least put military establishments on alert. They include the San Remo Manual on Naval Warfare, the Harvard Manual on Air and Missile Warfare, and the Tallinn Manuals (1.0 and 2.0), which deal with laws applicable to cyber-operations and cyberwarfare.

Two concerns for military experts are that other nations will feel the need to counter space technologies by launching their own programs and that the focus will move from defensive measures into lethal offensive weapons.

Iran and North Korea, which can already disrupt commercial satellite signals, are the countries most likely to jump to the next level once they have the technical ability.

India, Pakistan, Israel, Japan, the United Kingdom and Sweden either have missiles that could be adapted for space applications or have developed ways of maneuvering satellites for potential use in warfare.

Other states have taken hard aim at satellites. Libya jammed satellite transmissions from a communications company based in the United Arab Emirates in 2006 and 2011 that was relaying messages against the then ruling Muammar Gaddafi regime.

Terrorist groups have been using electronic and cyberwarfare for years to advance their causes, showing the ease with which space technologies can be employed — and the difficulties of policing the stratosphere.

Intelsat was forced to shut down an Asian satellite transponder in 2007 after it was hijacked by Sri Lanka’s rebel Tamil Tigers, who replaced the feed with their own stream of propaganda.

Insurgents or remnants of Iraq’s former regime jammed commercial SATCOM links used by the US military on at least five occasions during the coalition invasion of the country in 2003.

In 2011, US intelligence agencies reported that jihadists in Pakistan had started testing a Global Positioning System (GPS) jamming capability that was probably an offshoot of an Al Qaeda terror group research project.

The Middle East-based insurgents are keen to interfere with satellite signals and infrared tags that are used by US drone operators to pinpoint missile targets.

Military experts say that an electronic space war has been underway for at least a decade, and the flurry of research by China and Russia indicates it could one day escalate into the development of lethal weapons such as electromagnetic pulses or ground-based anti-satellite missile systems.

However, Michael Schmitt, a space war expert at the University of Exeter and a key figure in the Woomera initiative, said a conflict was more likely to start in the subdued surrounds of a military computer laboratory.

“The immediate form would be cyberattacks, either against the satellites or the ground stations that control them. It depends on the nature of the conflict whether you go beyond that,” he told The Guardian.

“There is a rule in humanitarian law that says that when conducting a military operation you must choose the method that produces the least collateral damage. So blowing up satellites must be operations of last resort – at least I hope so.”

This article by Alan Boyd originally appeared on Asia Times.