Are the World's Navies (Above the Waves) Almost Obsolete? 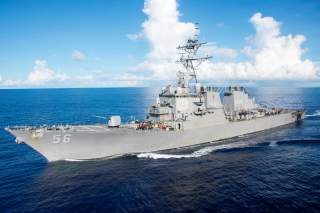 On the morning of May 4, 1982, the British Type 42 destroyer HMS Sheffield was on patrol southeast of the Falkland Islands. Tasked with stopping any Argentine submarines that might attack the British amphibious fleet preparing to retake the islands from their new Argentine occupiers, the crew of the Sheffield was on second-degree alert, watchful but not expecting any immediate trouble.

And unaware that their unhappy fate would be to make naval history.

Meanwhile, from an airbase in Argentina, two Argentine Navy Super Étendard attack jets roared into the air. Each of the French-made jets carried an Exocet radar-guided air-to-surface missile.

The jets flew low over the choppy South Atlantic to avoid British radar, before climbing to activate their own radars. They detected the Sheffield and a few other British warships assigned the dangerous job of picket duty, keeping Argentine aircraft and subs away from the more valuable aircraft carriers and transports in the Royal Navy task force.

The Super Étendards fired their Exocets and turned away. Sheffield’s sister ship, HMS Glasgow, spotted the missiles, and alerted the fleet. But Sheffield was more worried about hostile submarines than missiles (see the Royal Navy board of inquiry report here), had grown tired of previous missile alarms that turned out be false and didn’t register the Glasgow’s warning. Even if it had, the Sheffield—despite having been built in 1971 as an air-defense vessel against Soviet bombers—lacked jammers to disrupt their homing radars, and point-defense missiles and cannon to destroy them.

The smoke trails of the Exocets were spotted forty-five seconds before impact, and radar detected them at five seconds out. Too late to avoid them, or even alert the crew. One Exocet splashed into the ocean a half mile away, but the other slammed amidships into the destroyer, eight feet above the waterline. Whether the warhead actually detonated was debated at the time (the eventual conclusion was that the warhead did), but it may not have mattered: blazing rocket fuel set the Sheffield afire, while the impact knocked out much of its electrical and firefighting systems.

Despite valiant efforts to save it, the Sheffield sank six days later. Of its crew, twenty had perished.

But the damage ran deeper, into the very heart of the surface ship as king of the seas. For a time during that bloody summer of 1982, the world was mesmerized by the television images of a $200 million destroyer set ablaze by a $200,000 missile. If a single missile could sink a destroyer, then what could a salvo of missiles do to, say, a giant U.S. aircraft carrier?

It’s not that these missiles were a surprise. Or rather, they shouldn’t have been a surprise. The Germans and Americans had used guided glide bombs during during World War II. The Israeli destroyer Eilat had been sunk in 1967 by a Soviet-made Styx missile fired by a little missile boat, and by 1982, antiship guided weapons such the Harpoon had become common in Cold War navies. Even before the development of missiles, the advent of submarines, aircraft and mines more than a century ago ended the unchallenged primacy of surface vessels.

Still, theory is one thing. A smoldering hulk on your TV screen is another. The episode of the Exocet and the Sheffield signaled a new era had dawned over the oceans. In World War II, Japan would dispatch hundreds of aircraft in mostly futile attempts to sink American ships. After the Falklands, it became clear that smaller nations like Iran or North Korea, which otherwise had no chance of repelling an invading fleet in a sea battle, at least had the chance to inflict losses by using a few relatively cheap aircraft and missiles. Or to spring a nasty surprise, as Hezbollah did when it used a shore-to-ship missile to damage an Israeli warship off the Lebanese coast in 2006.

Not that it is a one-way street. Navies have become smarter, fielding antimissile missiles and cannon for point defense. as well as electronic jammers and decoys. For the United States, carrier-launched fighters backed by early-warning radar aircraft might destroy attackers before they come within range—unless the attackers are Chinese antiship ballistic missiles. It’s worth noting that of the six British vessels sunk at the Falklands, four were destroyed by old-fashioned aircraft bombs and only two by Exocets.

Nonetheless, in the twenty-first century, the U.S. Navy is grappling with how surface ships can operate in an era when antiship missiles are prolific, and hypersonic missiles—too fast to be shot down by current defenses—are on the horizon.

Surface ships aren’t going away. Or at least not until a missile can carry marines to a hostile shore, launch an airstrike or transport supplies. But the fate of the Sheffield showed that the oceans have become a much more dangerous place for those who sail on top of them.