Are We Entering a New Era of U.S. Grand Strategy? 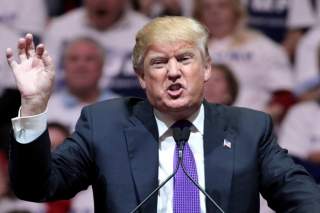 Donald Trump’s recent statements about US foreign policy—see the transcript of his exchange with The New York Times—serve to open up a point of electoral differentiation between the candidates. But they also raise a deeper, more fundamental question: are we entering a new era of US grand strategy, one in which America relies less upon its traditional alliances? Given the way Washington has thought about its allies since the early 1990s, it’s a fair question.

US grand strategy was at its clearest in the years between 1941 (post-Pearl Harbor) and the end of the Cold War, though foreshadowed by US support for Britain and France in World War One. Then Americans felt themselves engaged in a contest with authoritarian great powers seeking world domination. Michael Lind, in his classic work The American Way of Strategy, observes that alliances were the key to victory in all three world wars of the twentieth century. Victory wasn’t merely military and technological. Superior economic strength allowed the US and its allies to pursue a strategy of siege warfare against their opponents, starving them into submission.

That period was over by the 1990s. George H.W. Bush spoke of a new world order. Great-power adversaries were thin on the ground. US strategists were exploring the meaning of unipolarity. Robert Jervis wrote that the US no longer needed a grand strategy, and that it was vain even to attempt to define one in an age of secondary threats.

Alliances were still seen as useful—as long as they became something other than what they had been. NATO was told it could go out-of-area or out of business. Even a NATO that agreed to go out-of-area, though, left Washington frustrated and unhappy. Coordinating NATO’s bombing of Belgrade in 1999 was nothing but a chore for US diplomats—it meant trying to keep 19 countries on board for each individual bombing mission.

After 9/11, the US put its faith in unilateralism and coalitions, not alliances. Neither proved especially successful. But it would be wrong to imagine that their weaknesses made the US think better about its allies. NATO became a political instrument, expanding eastwards, taking on members that added little strength but heaped new responsibilities upon the traditional partners. New members were more like Facebook friends, one critic observed, than genuine security contributors.

Obama achieved a partial restoration of alliances as instruments of US foreign policy, especially in Asia as a consequence of the rebalance. But he was also busy recalibrating that foreign policy. With the US itself stepping back from the use of force, US allies typically followed suit. But allies never had the option of withdrawing from their own regions. Eastern Europeans fretted about a more aggressive Russia. Saudi Arabia worried about the regional power balance in a post-US Middle East. And US allies in Asia grew more concerned about China’s rise and the inexorable progress of North Korea’s nuclear program.

In short, in the 25 years since the end of the Cold War, US enthusiasm for alliances has wavered, bringing into question the degree of US attachment to the winning formula of the twentieth century. Meanwhile—and especially in recent years—the concerns of its allies about regional power shifts have grown. The result has been a set of alliances that now sorely need fresh signals of US commitment, not—as Donald Trump thinks—fresh signals of disengagement.

True, Trump might well be intending to signal to US allies that he expects them to carry more of the load while the US embarks upon a program of domestic recovery. This is, after all, a man who said the Iranian nuclear deal might have been improved by Kerry’s walking away from the table now and then. He bluffs. But if he isn’t bluffing, and if major US allies decide that security has to become more of a national enterprise and less of an international one, some turbulent waters lie ahead.

For Australia, those waters will pose major strategic questions. At the moment Canberra’s trying to manage two distinct strands in its defence diplomacy: accommodating a rebalancing US in the Asia–Pacific while reaching out to a new set of Asian partners. We’ve seen ANZUS shift up a gear as a result of efforts in Washington and Canberra to work together more closely. But a US that pulls back from its alliances is going to create problems in both areas—not only will ANZUS falter but our prospective partners in Asia will also be distracted, trying to redefine their own priorities in a radically different strategic order.