Argentina Has Just 3 Years to Invade the Falklands 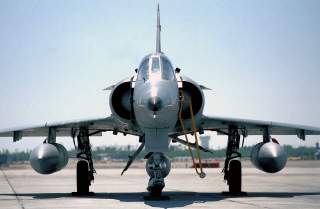 Argentina is trying to rebuild its air force by resuming negotiations with Israel to acquire 12–14 Kfir Block 60 fighters in 2017. These are capable — if antiquated — fighters originally dating to the 1970s. But the Block 60 includes several upgrades including a modern Elta 2032 AESA radar.

At the same time, Britain currently has no operational carriers, or at least proper ones. The lone British flattop, HMS Ocean, only carries helicopters. Britain has two supercarriers on the way, but it won’t be until 2020 until the first one, HMS Queen Elizabeth, is operational.

Few of the Royal Navy’s F-35B Joint Strike Fighters will be ready by 2020. And it won’t be until 2023 before Queen Elizabeth has enough of the carrier-launched fighters for two squadrons — a total of 24 aircraft — which would seriously complicate another Argentine invasion.

Why would Argentina want Israeli fighter planes? To defend its air space, of course. But also, perhaps one day, to challenge Britain for control of the Falklands, which Argentina invaded then lost during the 1982 war.

That gives Argentina three years to retake the Falkland Islands, or possibly a few more years after that, because of the time Britain needs to prepare Queen Elizabeth’s fighter squadrons.

Another invasion is extremely unlikely to happen. Britain’s military has faded since the war, but the Argentine armed forces have deteriorated even faster. Buenos Aires is simply not in the condition to retake the islands even with Kfir fighters.

Argentina lost dozens of planes — roughly one-third of its air force — during the Falklands War and it never recovered. Today, Buenos Aires’ air force is one of the most ancient in Latin America, and more than three decades of airframes being left to decay and an economic meltdown in the 1990s further depleted the air arm’s ability to replenish itself.

Not that Argentina would invade if it could. Mauricio Macri, who has been Argentina’s president since 2015, has sought to mend relations with the United Kingdom after years of the more nationalist and hard-line Kirchners.

Argentina continues to claim the Falklands as its territory and this hasn’t changed under Macri, who stands for reelection in 2019. But a military confrontation is even more unlikely, not that it was likely or politically feasible a few years ago.

The Argentine military’s fighter jets, vintage Super Etendards and subsonic Skyhawks, are grounded in entirety. Buenos Aires withdrew the last of its Mirage III fighter jets from service in 2015.

“I know the state has ignored you for years, abandoned you, and that’s created problems in terms of budget, equipment and infrastructure,” Macri told the military during an event in May 2016.

That leaves Argentina’s air defense responsibilities to no more than 30 Pucara ground attack planes, and a limited number of Tucano and Pampa multi-role trainers. But to stand a chance of fighting a war, Buenos Aires would need dozens of high-performance jets and well-trained pilots to fly them.

This doesn’t even touch on the decline of Argentina’s army, which has shortages of weapons and a serious problem with guns, ammunition and anti-tank missiles being pilfered and sold to the black market.

Were Argentina to somehow rebuild its air force, or neutralize Britain’s Falklands air base from the ground, Britain would depend on the upcoming Queen Elizabeth-class carriers to provide air cover for an amphibious counter-invasion — just as it did with the carriers HMS Hermes and Invincible in 1982.

Yet Argentine “power-projection capability is extremely limited,” the International Institute of Strategic Studies noted in a 2016 report.

That would hardly change with a dozen Kfirs. The fighters’ unrefueled combat radius means they could only stay over the Falklands for a few minutes, and Argentina’s two tankers, both modified Hercules transports, are inadequate.

There’s also no guarantee Israel will provide the weapons Argentine Kfirs would need — such as sea-skimming Gabriel III anti-ship missiles — to threaten British vessels. Israel would also need approval from the United States to sell the Kfir, because the jet uses the U.S.-made J-79 engine. But that’s not impossible, and America has sold Argentina weapons in the past.

So even if Argentina could buy the fighters, it’d be far below where it was 35 years ago, when the Fuerza Aerea Argentina possessed dozens of fighter jets and a considerably larger navy held back because of British submarines — which still pose a lethal threat. And by the time the fighters are ready and pilots get up to speed, Britain’s carriers and their fighter squadrons will be entering service.

On top of everything else, Britain’s modest Falklands defense force is better equipped than the tiny garrison present in 1982 — and the archipelago has the military infrastructure including an airbase Britain could reinforce … given enough advance warning.

By the way, Argentina’s transport ships are in no condition to transport enough troops to the Falklands to even approach the 1982 numbers.

Argentina could conceivably still attack British warships. In February 2016, the navy test fired upgraded Exocet anti-ship missiles off Bahia Blanca, blowing up a decommissioned oil tanker. A better strategy for Argentina would perhaps take a cue from China, which harasses its rivals in the South China Sea — building a long-term presence that is costly and difficult to reverse.

But taking and holding the islands — and posing a bare minimum threat to British ships — are two very different missions.