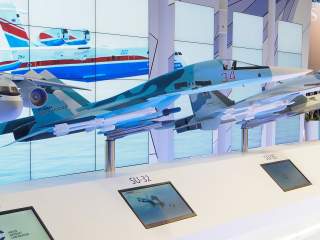 In times of sanctions, selling military equipment to a Western audience is no small feat for Russia. In this regard, Russia’s relatively low-key presence at the 52nd Le Bourget International Air Show 2017, that took place in Paris between June 19-25, looked somewhat at odds with Rosoboronexport’s usually all-out arms exports strategy. Seeking to find new outlets for cooperation on the world arms market, Russia seemingly adopted a two-prong approach at Le Bourget: aggressive exports-oriented marketing of Russia’s targeted “national champions” and combat-proven systems on the one hand, and embracing the rhetoric of a civilian and dual-use production unscathed by sanctions on the other.

At Le Bourget, Russia’s presence was relatively small, with a total of 34 companies mostly crammed inside the Rosoboronexport and United Aircraft Corporation (OAK) stands. Other industrial actors included Russian Helicopters (a member of Rostec), United Engine Corporation (ODK, member of Oboronprom, part of Rostec), aluminum and titanium producer VSMPO, and the “usual suspects” the likes of Irkut, Ilyushin, Sukhoi, MiG, and Beriev.

Interestingly enough, the stands of Rosoboronexport and OAK were facing each other – a symbolic reminder that Rostec’s head Sergei Chemezov recently announced that the takeover of OAK would “make sense”?

The Russian delegation was led by Dmitri Chougaev, director of the Federal Service for Military-Technical Cooperation (FSVTS), with an additional common delegation between Rosoboronexport and Rostec led by Vladimir Artiakov and the Rosoboronexport delegation headed by Sergei Kornev, in charge of the Department for special material exports.

Incidentally, Sergei Kornev was carjacked in the intercity neighborhood of Saint Denis on June 20 and reportedly suffered minor injuries after several assailants broke his car window and stole his valuables…

Russia demonstrated some 190 models and pieces of equipment at Le Bourget. Unfortunately for the industrial producers, and much to Rosoboronexport’s dismay, Russia was not allowed to display full-scale military aircrafts and air-defense systems, and had to limit itself to designs and model aircrafts. As a reminder, French customs had banned the import of full-scale military equipment due to the sanctions regime. The Russian delegation used the impediment regarding customs clearance to hammer down the message that industrial actors were increasingly “fatigued” by sectorial sanctions against the national military-industrial complex…

During the airshow, the Russian delegation did not seem particularly interested in seeking to wow the French and European audience in terms of arms exports, sanctions preventing it. In this, Rosoboronexport concentrated its energy on a unified and aggressive marketing strategy featuring its “national champions” at the benefice of traditional exports clients.

The rhetoric used in official Rosoboronexport press communiques outlined the fact that Russian military equipment was “more attractive than its foreign competitors” thanks to “impressive performances”, advantageous cost-to-efficiency ratio, and adaptability to extreme environments. Russia also tremendously insisted on the value of its “combat-proven” systems – a new trademark for the industry with “efficient and reliable” military equipment.

Air defense systems such as the Antei-2500 surface-to-air systems, Buk-M2 surface-to-air missiles, Pantsir-S1 anti-aircraft systems, and Verba short-range surface-to-air missiles were also displayed. For the first time in France, Russia presented the exports variants of its indigenous ISTAR UAVs: the Orlan-10E (St Petersburg Special Technological Center) and the Takhyon (Izmash). These exports-oriented models benefit from the “combat-proven” label of the military operations in Syria.

With these systems in mind, Russia clearly had the intention to reach out to its traditional exports clients and not to a Western audience. In this, the Paris airshow was primarily used to roll on parallel discussions and continue negotiating future contracts, and notably with Belarus (3-year contract for Su-30SM fighter jets), India (ongoing discussions related to the S-400 anti-aircraft missile system), and Egypt – it was announced in Paris that Russia had won the tender for the delivery of Ka-52K Katran helicopters to equip the Egyptian Mistral-class carriers.

As mentioned above, Russia played to “civilian card” to try and please the Western aircraft industry. Thus, on top of a focused and unified marketing approach towards its traditional clients, Russia insisted on its ability to produce civilian and dual-use aircrafts unaffected by the sanctions regime.

Documents and leaflets handed out by Russian companies present at Le Bourget particularly insisted on civilian aircrafts (Irkut MC-series airliners, Sukhoi Superjet SSJ100, OAK and China’s COMAC airliner project C929, etc.) and the space sector. In this regard, OAK is currently seeking to expand the role of its civilian aircraft production – corollary to the increased “civilianization” of the defense industry – and unify it under the Sukhoi Civil Aircraft Company (SCAC).

However, OAK is currently affected by the fact that Alexei Rogozin – the son of the vice-Prime Minister in charge of the defense industry Dmitri Rogozin – was recently placed as head of the corporation’s civilian transport aircraft division. A potential conflict of interest between OAK and Dmitri Rogozin that landed on the Prosecutor-General’s office after opposition party Yabloko filed a complaint in May 2017.

According to Rosoboronexport, Russia’s aircraft exports portfolio today amounts to 19 billion dollars. Aircrafts and air defense systems represent some 40% of Rosoboronexport’s total exports over the past 5 years and Russia is currently seeking to become the first military aircraft exporter in the world within 10 years, with a projected share of about 30% of the global arms market in this sector. In the context of sanctions, Russian military exports need to swiftly adapt to this seemingly “new normal”.

Mathieu Boulegue is a security analyst in the field of Eurasian affairs. Partner for the risk management, strategic analysis, and business consulting firm AESMA. Member of CAPE-Sogdiane, an advocacy think-tank focusing on Eurasia and post-soviet studies.