Army Aviation: 100 Years of the Chinook 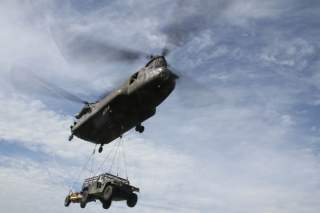 The Army plans to fly its Vietnam-era workhorse CH-47 Chinook cargo helicopter for 100 years by continuously upgrading the platform through a series of ongoing technological adjustments designed to improve lift, weight, avionics and cargo handling, among other things.

The Army goal is to allow the helicopter, which was first produced in the early 1960s, to serve all the way into the 2060s – allowing the aircraft service life to span an entire century.

“Our primary goal is maintaining the CH-47F’s relevance to the warfighter,” Lt. Col. Ricard Bratt said in a special statement to Scout Warrior.

The latest model, called the Chinook F helicopter, represents the latest iteration of technological advancement in what is a long and distinguished history for the workhorse cargo aircraft, often tasked with delivering food, troops and supplies at high altitudes in mountainous Afghan terrain.

Able to travel at speeds up to 170 knots, the Chinook has a range of 400 nautical miles and can reach altitudes greater than 18,000-feet. Its high-altitude performance capability has been a substantial enabling factor in the mountainous regions of Afghanistan.

The aircraft is 52-feet long, 18-feet high and able to take off with 50,000 pounds. The helicopter can fly with a loaded weight of 26,000 pounds. In addition, the aircraft can mount at least three machine guns; one from each window and another from the back cargo opening.

The Chinook F is in the process of receiving a number of enhancements to its digital cockpit called the Common Avionics Architecture System, or CAAS, such improved avionics, digital displays, Line Replacement Units, navigational technology, multi-mode radios, software and emerging systems referred to as pilot-vehicle interface. Pilot-vehicle interface involves improved computing technology where faster processor and new software are able to better organize and display information to the crew, allowing them to make informed decisions faster.

By 2018, the Army plans to have a pure fleet of 440 F-model Chinooks. By 2020, the Army plans to field a new “Block 2” upgraded Chinook F which will increase the aircraft’s ability to function in what’s called “high-hot” conditions of 6,000 feet/95-degrees Fahrenheit where lower air pressure makes it more difficult to operate and maneuver a helicopter.

The Block 2 Chinook will also be engineered to accommodate a larger take-off maximum weight of 54,000 pounds, allowing it to sling-load the Army’s new Joint Light Tactical Vehicle underneath. This provides the Army with what it calls a “mounted maneuver” capability wherein it can reposition vehicles and other key combat-relevant assets around the battlefield in a tactically-significant manner without need to drive on roads. This will be particularly helpful in places such as Afghanistan where mountainous terrain and lacking infrastructure can make combat necessary movements much more challenged.

The Block 2 Chinook will also receive a 20-percent more powerful Honeywell T55-715 engine, according to a report from Aviation Week.

The Chinook F is also in the process of getting new rotorblades engineered with composites and other materials designed to give the helicopter an additional 4,000 pounds of lift capability, Army officials explained.

Another key upgrade to the helicopter is a technology called Cargo-On/Off-Loading-System, or COOLS, which places rollers on the floor of the airframe designed to quickly on and off-load pallets of equipment and supplies.  This technology also has the added benefit of increasing ballistic protection on the helicopter by better protecting it from small arms fire.

“The COOLS system has been added to the current production configuration and continues to be retrofitted to the existing F fleet. We have completed approximately 50-percent of the retrofit efforts. Since its fielding we made very minor design changes to improve maintainability.

The helicopter will also get improved gun-mounts and crew chief seating, along with a new vibration control system.

“We are finalizing design efforts on an improved vibration control system that, in testing, has produced significant reduction in vibration levels in the cockpit area,” Bratt said.

The F-model includes an automated flight system enabling the aircraft to fly and avoid obstacles in the event that a pilot is injured.

Additional adjustments include the use of a more monolithic airframe engineered to replace many of the rivets build into the aircraft, Army officials said.

"The program is looking at some significant airframe improvements like incorporating the nose and aft sections of the MH-47G (Special Operations Variant) on to the CH-47F. In addition, the program office has conducted an in depth structural analysis with the intent of setting the stage for increased growth capacity of the airframe for future upgrades,” Bratt said.

The CIRCM system is an improved, lighter-weight version of Advanced Threat Infrared Countermeasures, called ATIRCM, -- a high-tech laser jammer that is able to thwart guided-missile attacks on helicopters by using an infrared sensor designed to track an approaching missile. The system fires a multiband heat laser to intercept the missile and throw it off course,

ATIRCM has been fielded now on helicopters over Iraq and Afghanistan. CIRCM, its replacement, lowers the weight of the system and therefore brings with it the opportunity to deploy this kind of laser counter-measure across a wider portion of the fleet.

Chinooks are also equipped with a combat-proven protective technology called Common Missile Warning System, or CMWS; this uses an ultraviolet sensor to locate approaching enemy fire before sending out a flare to divert the incoming fire from its course.

Finally, over the years there have been several efforts to engineer a small-arms detection system designed to locate the source of incoming enemy small-arms fire to better protect the aircraft and crew.