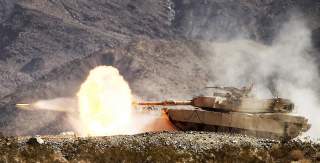 “Mobile Protected Firepower helps you because you can get off road. Mobility can help with lethality and protection because you can hit the adversary before they can disrupt your ability to move,” Rickey Smith, Deputy Chief of Staff, G-9, TRADOC, told Warrior Maven in an interview.

Designs, specs and requirements for the emerging vehicle are now being evaluated by Army weapons developers currently analyzing industry submissions in response to a recent Request for Proposal.

BAE Systems, General Dynamics Land Systems and SAIC (partnered with ST Kinetics and CMI) are among the industry competitors seeks to build the new MPF. It is be no means surprising that, given the ongoing competition, industry competitors are reluctant to discuss details of their various offerings.

“The science is how do I fuse them together? How do I take multiple optical infrared sensors and use them at once in real-time,” Smith said.

“If you are out in the desert in an operational setting, and use them all together, machines can help us sift through information,” added Smith.

Elements of the XM360 include a combined thermal and environmental shroud, blast deflector, a composite-built overwrapped gun,

An article in nextBIGFuture cites progress with a technology referred to as rarefaction wave gun technology, or RAVEN. explaining it can involve “combining composite and ceramic technologies with castings of any alloy – for dramatic weight reduction.” The idea is, in part, to develop and demonstrate hybrid component concepts that combine aluminum castings with both polymer matrix composites and ceramics, the report says.