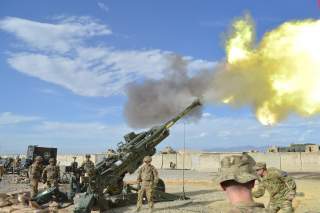 The Army will release a new combat “FM 3.0 Operations” doctrine designed to better position the service for the prospect of large-scale, mechanized, force-on-force warfare against technologically advanced near-peer rivals – such as Russia or China - able to substantially challenge US military technological superiority.

Senior Army leaders involved in ongoing analysis of current and future threats, as they pertain to a fast-changing operational land-combat environment, explained that changing global circumstances, inspired the need for the Army to craft new doctrinal specifics.

The new "Operations" doctrine, to be unveiled in a matter of days at the Association of the United States Army Annual Convention, is intended as a supplement or adjustment to the Army’s current “FM 3.0 Full Spectrum” Field Manual, a doctrine which first emerged more than several years ago.

Authors of the new doctrine explain that while many elements of the Army's previous "Full Spectrum" doctrine are retained, updated and expounded upon in the new doctrine -- FM 3.0 Full Spectrum was written when the Russians had not attacked Ukraine, the Army was fully immersed in war in Afghanistan and the current tensions in the South China Sea had not yet emerged to the extent they do today, Col. Rich Creed, Combined Arms Director Ft. Leavenworth, told Scout Warrior in an exclusive interview.

“The Army needs to be prepared for large-scale combat operations against potential near-peer capabilities within a regional context. The operational scenario is different now. We are retaining lessons and experiences from prior doctrine, but we need to address the tactics and procedures conducted by large-scale units to conduct land combat,” Creed said. “We update doctrine when the situation requires it.”

“Air Land Battle was devised to address a specific threat large-scale land combat on the European continent - large forces and it was a bipolar world. We live in a multi-polar world now. We may still be the lone superpower but there are other forces in the world that have improved significantly. We don't have the luxury of focusing on one kind of threat or one kind of operation,” Creed said.

One very senior US Army official told Scout Warrior that the new "operations" doctrine was quite necessary given the extent to which potential adversaries have studied US military techniques and technologies first used during Desert Storm in the early 1990s.

“Desert Storm showed the world Air-Land battle. We unleashed something they had envisioned or heard about. They have studied our military,” the senior official said.

Creed added that the new doctrine is indeed cognizant of both future and current threats to US security, including North Korea, Iran, Russia and China.

While the emerging “operations” doctrine adaptation does recognize that insurgent and terrorist threats from groups of state and non-state actors will likely persist for decades into the future, the new manual focuses intently upon preparedness for a fast-developing high-tech combat environment against a major adversary.

For instance, Russia and China both claim to be developing stealth 5th generation fighters, electronic warfare and more evolved air defenses able to target aircraft on a wider range of frequencies at much farther distances. Long-range, precision-guided anti-ship missiles, such as the Chinese DF-21D, are able to target US carriers at ranges up to 900 miles, presenting threat scenarios making it much harder for US platforms to operate in certain areas and sufficiently project power.

When it comes to land combat, the renewed doctrine will accommodate the current recognition that the US Army is no longer the only force to possess land-based, long-range precision weaponry. While JDAMs and GPS-guided weapons fired from the air have existed since the Gulf War timeframe, land-based precision munitions such as the 155m GPS-guided Excalibur artillery round able to hit 30 kilometers emerged within the last 10 years. This weapon first entered service in 2007, however precision-guided land artillery is now something many potential adversaries now possess as well.

In addition, the Army's Guided Multiple Launch Rocket System (GMLRS) is a GPS-guided rocket able to destroy enemies at ranges up to 70 kilometers; the kind of long-range land-fired precision evidenced by GMLRS is yet another instance of US weapons technology emerging in recent years that is now rivaled by similar weapons made my large nation-state potential adversaries.

Drones, such as the Army's Shadow or Gray Eagle aircraft are also the kind of ISR platforms many nations have tried to replicate, adding to a high-threat, high-tech global marketplace.

All of these advancing and increasingly accessible weapons, quite naturally, foster a need for the US to renew its doctrine such that it can effectively respond to a need for new tactics, concepts, strategies and combat approaches designed for a new operational environment.

Given this global threat calculus, the Army is now vigorously looking to innovate and harness new technologies for future platforms -- all while emphasizing upgrades to major Army land war platforms, such as the Abrams tank, Stryker, Paladin and Bradley; for instance, many Army weapons developers explain that a series of high-tech upgrades to the Abrams tank make the platform superior to emerging Russian T-14 Armata tanks and the newest Chinese Type 99 main battle tanks.

Also, a recent report from The Diplomat, citing Chinese military officials, writes that the Chinese are now testing a new tank: "The People’s Liberation Army (PLA) has tested a new tank on the Tibetan Plateau in western China, the Chinese Ministry of Defense announced on June 29," the report states.  The US Army is now conducting early conceptual work on a new, next-generation tank platform to emerge in the 2030s.

The Army’s current doctrine, Field Manual 3.0, emphasizes what the service calls “full-spectrum” operations to include state and non-state threats. The manual addresses the importance of a “whole-of-government” approach aimed at counterinsurgency, combined-arms, stability operations as well as anticipated future developments.

The existing FM 3.0 doctrine is, among other things, substantially grounded upon the need for the Army to be prepared for non-linear, asymmetrical warfare fighting groups of insurgents often deliberately blended in with civilian populations.

Full-spectrum is meant to connote that Army operations will also include psychological operations, humanitarian missions, asymmetrical warfare, train-and-equip priorities as well as continued collaboration with allies and preparations for the full-range of combat possibilities.

With a decrease in combat operations in Iraq and Afghanistan in recent years, the Army has been adapting its training focus to incorporate a broader spectrum of mechanized warfare, force-on-force threats following 15 years of counterinsurgency. This is something the new doctrine is expected to reinforce.

While the existing FM 3.0 Full Spectrum does incorporate a need to address modern threats such as “hybrid warfare,” much of the focus stops short of recognizing the full extent to which other rival militaries are developing platforms and technologies comparable or superior to some US weapons systems.

Enemies such as ISIS and state-sponsored terrorist groups such as Hamas and Hezbollah are equipped to fight with a blend of terrorist tactics and advanced weaponry such as sophisticated sensors, surveillance networks, and some precision munitions such as anti-tank guided missiles. This blended threat, requiring a mixture of both combined arms and counterinsurgency tactics, is the kind of scenario the Army has been preparing to confront.

The new manual also incorporates a fast-evolving Pentagon strategy referred to as “multi-domain” warfare; this is based upon the recognition that enemy tactics and emerging technologies increasingly engender a greater need for inter-service, multi-domain operations.

This focus includes accommodating the need to address fast-changing threats in the cyber, electronic warfare, precision weaponry, space, drones and C4ISR domains. Rapid developments in these areas underscores the importance of cross-domain connectivity and warfare, such as an ability of a sea-based F-18 to cue land-based artillery from tactically difficult distances.

"Space or cyber-enabled capabilities are not geographically bound but rather extend to an infinite amount of range. Commanders and staff need to be able to think about that when conducting operations," Creed said.