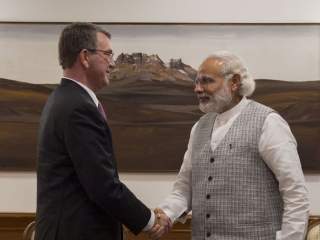 The two sides also reached an understanding on some other security related measures. These included: a new bilateral Maritime Security Dialogue; enhanced military engagements and exercises at a more advanced level; naval discussions on submarine safety and anti-submarine warfare; the exchange of information on commercial shipping traffic; and two pathfinder projects. Taking note of these positive developments, Carter stated that the India-U.S. relationship is destined to be one of the 'defining' partnerships of the twenty-first century.

What gives credence to such understandings and statements is the convergence of U.S. and Indian interests in the evolving geo-strategic paradigm of the Indo-Pacific region. Specifically, this is the result of China's claims over the South China Sea, its declaration of an Air Defense Identification Zone in the East China Sea, and its demonstrations of its air and naval muscle intended to restrict freedom of navigation and degrade the rules based order.

Against these developments, Carter's visit to India was aimed as a signal to China that, in addition to alliance agreements with Japan, South Korea, Australia and Singapore, India—the dominant power in the Indian Ocean (with control over choke points like the Malacca Strait)—is also on the side of the United States.

India is also witnessing Beijing's strategic advances elsewhere. China's overtures to build a railway to Nepal; its docking of nuclear submarines at Sri Lankan ports; its building of road and rail links to connect with Pakistan; showing its presence along the line of control in the 'Pakistan occupied Kashmir'; and its strengthening of defense relations with Islamabad. India views these actions as part of a broader strategic offensive. China has even blocked India's attempts at the UN to have Pakistan censured for releasing from prison Zakiur Rehman Lakhvi, the alleged mastermind of the Mumbai terror attacks, and to have Massod Azhar, the Pathankot terror attack mastermind, declared a “terrorist.”

In India, these actions collectively bring to mind Mao's declaration back in 1962, that he would “teach India a lesson.”

Other recent developments that have raised serious concerns in India include China's emphasis on “far seas” in its latest Military Strategy, which includes the Indian Ocean, projects like “one belt one road” and the construction of Gwadar Port in Pakistan. Thus, by signing the Logistics Exchange Agreement with the United States, India signaled that it has both an option to partner with the United States, and that China's hegemonic postures could facilitate its movement more fully into the U.S. camp.

However, India, notwithstanding its growing relationship with the United States, has also taken notice of the ongoing strategic partnership between the United States and Pakistan. Recently, in the face of Indian opposition, the United States approved the sale of eight F-16 fighter jets to Pakistan, a transaction intended to enhance Pakistan's counter-terrorism capability. By Indian calculations, however, this sizeable force of fighter jets appeared disproportionate for the fight against terrorism. Also, with the U.S. decision to withdraw its forces from Afghanistan, India was left to defend itself.

India also considers a confrontational posture towards China would have long-term repercussions. While the United States, with its global security priorities, may shift its orientations elsewhere, India shares around 6000km of borders with China and Pakistan, and could be pushed into a long-term rivalry. India, at this stage, cannot afford a two-front conflict. Moreover, India's increasing trade links with China, its lack of a direct interest in the South China Sea dispute, and its own dominance in the Indian Ocean keep it somewhat comfortable with Beijing.

To respond to the challenges posed by China, there is no doubt India has shifted its traditional approach of “dissuasion” to one of “credible deterrence,” considering its strategic thinking, New Delhi is likely to stick with its policy of deterrence rather than containment regarding China, and is unlikely to enter into an alliance with the United States.

Given these considerations, what additional significance does Carter's visit hold? It appears the United States has adopted a new approach in engaging with India. Two visits to India by President Obama and a second visit by Secretary of Defense Carter within a year indicate the importance the United States attaches to the relationship. Moreover, the Obama Administration has emboldened Prime Minster Narendra Modi's “Make in India” campaign. Carter categorically stated that under the U.S.-India Technology Initiative, the United Stats has delivered “unique technologies” to India and there is no “agreement like that with other countries.”

Further expanding collaboration under the Defense Technology and Trade Initiative, U.S. defense companies Boeing and Lockheed Martin have expressed interest in manufacturing F/A-18s and F-16s in India. Also discussed have been collaboration on digital helmet mounted displays for fighter jets (to aid Indian counter-terrorism efforts), and a joint biological tactical detection system to support India's requirements. Addressing India's other concerns, Carter concurred with New Delhi that Pakistan acts as a source of terrorism and the United States, as well as India, has suffered from terrorism “emanating from Pakistan.”

Against this backdrop, India's agreement in principle to the Logistics Exchange Agreement is a step forward from the previous Indian government that, under the camouflage of strategic autonomy, evaded signing “foundational agreements.” As India is not an alliance partner like Japan and Australia, it does not allow U.S. troops to be stationed on its soil. While India and the United States have converging strategic interests, India has retained its autonomy. Therefore, India's evolving strategic partnership with the United States appears not only aimed at China, but also affords India some leverage in its negotiations with Beijing.

In sum, Carter's visit appears to be a win-win outcome, India and the United States agree on safeguarding freedom of navigation and flights, a rules-based order, and upholding regional security and prosperity in the Indo-Pacific region. However, India's clear intention to retain its strategic autonomy reflects its apprehension that U.S. strategic interests may shift elsewhere. In what may have been an effort to allay this concern, Carter stated: “We try to be a trusted partner of India.”

In India's view, the United States needs to do more than “try.”

Dalbir Ahlawat has over 15 years experience in conducting research on topics related to strategic and security perspectives. Based on the research outcomes he has published three books and around 20 research papers in journals and edited books. In addition to his research, he has taught courses at postgraduate and undergraduate levels both in Australia and overseas. Courses taught have focused on International Relations, Border Security, Migration, Globalisation and Security. This article first appeared in the Interpreter.