Asia Get Ready: Is This China’s Vision of Future Aircraft Carrier Designs? 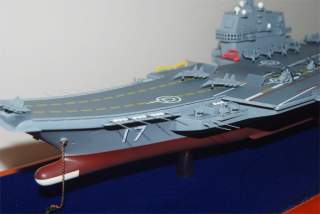 A high-caliber model manufacturer may just have provided a unique glimpse into the Chinese vision of aircraft carriers to come.

To stimulate discussion in China-watching circles, it is useful to assess the commercial enterprise’s three new indigenous carrier models (more pictures are available on my personal homepage here) critically and consider their possible significance before watching for other indicators of how things will ultimately unfold in reality. At very least, this offers a great solution for last-minute holiday gift shopping.

The dimensions and specifications of China’s first aircraft carrier CV16 (Liaoning) are well-known. Based on the Russian Project 11436 hull Varyag, it was long visible under refitting in Dalian Naval Shipyard before finally going to sea in 2011.

Now Jinshuai Model Crafts, based in Zhanjiang City, Jiashan District, is displaying models of putative hulls 17, 18, and 19 on its website and catalogs. These models provide clues to a vital question: what direction will China’s domestic aircraft carrier design and production take? In short, the models suggest: China will progress as quickly as possible to a large nuclear-powered design, similar to a Nimitz- or Ford-class hull with Chinese characteristics, and let deck aviation capabilities grow into the gargantuan new platform as they become able to do so.

Why take the time to analyze these depictions seriously? First, while other models have appeared, to this author’s knowledge this is the first representation of hulls 17-19. The idea of a trio is particularly interesting, because various Chinese sources have described CV16 as merely a training carrier, while stating that China needs at least three fully-functional aircraft carriers. According to People’s Liberation Army (PLA) Academy of Military Science Research Fellow Du Wenlong, this is so that “one is always available for operational missions, while the second is used for training and the third is resupplied and retrofitted.” Second, Jinshuai Model Crafts purports to be a cut above the rest. Located near the South Sea Fleet Headquarters in Zhanjiang, it produces a wide range of meticulously detailed models of PLA Navy (PLAN) vessels. The company claims to have produced models given as official gifts by PLA attachés, for fleet visits, and in conjunction with naval diplomacy in the Gulf of Aden—something that would seem to require a track record of at least somewhat passable plausibility. Finally, this company would seem to have an economic incentive to maximize sales by offering the most accurate and forward-looking items possible. It likely has access to contacts and information to help ensure that its representations of platforms are as realistic as possible, particularly in their broader parameters. Where the model builder may be “winging it” a bit with these aircraft carrier models concerns associated weapons systems, sensors, and aircraft. Here, their description is less than official and appears to be influenced by Internet speculation.

Explicit caveat up front: Unless otherwise stated, specifications for weapons and sensors listed below are not from the models themselves, but from nameplates accompanying models of CV17 and CV18. Nameplate data regarding overall carrier dimensions and performance parameters are plausible, but nameplate data regarding weapons and sensors are often inconsistent with what is depicted on the model. These nameplate data are nevertheless included here to offer grist for further discussion and analysis. That is the larger purpose of this writing: not to offer conclusions that go beyond the limited and sometimes contradictory paraphernalia marketed by Jinshuai Model Crafts thus far, but rather to stimulate deeper examination of China’s ongoing development of a highly complex, symbolic system of systems for the seas and air above them.

Like Liaoning, CV17 also has a ski jump. The nameplate accompanying the model cites a length of 315 m, width of 75 m, draft of 9 m, and cruising speed of 31 knots. CV17 is credited with a standard displacement of 65,000 tons and a full displacement of 80,000 tons. These figures seem plausible.

Rather than representing a mere Chinese copy of the Project 11437 Ul’yanovsk-class-derived carrier, however, CV17’s smokestack shape and exhaust stack arrangement suggests a transition to all gas turbines, or even a diesel/gas turbine combination, instead of nuclear reactors and steam turbines. In another sign of intended design improvements, the model boasts a hydrodynamic projected bulbous bow.

One curiosity in the CV17 model is its incorporation of both a ski-jump and two catapults. While certainly odd from a U.S. perspective, this is not completely outlandish and even makes some sense for China’s “narrow-the-gap-from-behind-” or, ideally, “catch up-” style development of carrier operations. Such a setup could offer a platform for pilots to start working on catapult launches before transitioning to a full-up flattop carrier. Additionally, the relative position of indicated catapult tracks (dark red lines) and related blast deflectors really do not make sense. This might be attributed to a lack of knowledge on the model builder’s part.

It is with the CV18 model that things really get interesting. Advertised as an “indigenously produced nuclear-powered aircraft carrier,” the catapult-equipped flattop closely resembles the U.S. Ford class in configuration, with a similar hull layout and the island far back. Yet there are also echoes of the Nimitz class, familiar to me through my nine days delivering lectures and briefings aboard the flagship USS Nimitz (CVN 68) in April 2013. As with the CV17 model, the positions of the blast deflectors and catapult positions on CV18 can be attributed to a lack of knowledge by the model builder.

This hull is 330 m long and 76 m wide (no draft is given). Standard displacement is 88,000 tons, full displacement is 101,800 tons. All these parameters are similar to those Jane’s gives for both Nimitz and Ford. Nimitz carriers are 332.9 m long and 76.8 m wide, Ford carriers 332.8 m long and 78.0 m wide; the actual deck dimensions are similar. Broadly speaking, CV18’s listed speed, hull form, and reactors are a bit closer to Nimitz’s, while the exterior depicted in the model is a closer to that of the Ford-class. Given China’s penchant for foreign technology collection, copying, incorporation, and multi-source emulation, this may well not be coincidental.

Here is how the model shop imagines China will exploit atomic power and move from CVs to CVNs: Two pressurized water reactors will provide nuclear propulsion. Each reactor drives two sets of main turbines, for a total of four turbines, which connect with four shafts delivering 260,000 hp. One turbine per shaft is conservative, but consistent with U.S. practice.

Total power is 194 megawatts (MW)—presumably not thermal output, but power after all inefficiencies are accounted for; cruising speed 33 knots. This implies the ability to cruise as fast as Nimitz on 15MW less power. This seems optimistic, though theoretically plausible, given the model’s somewhat-lower-drag bow. Puzzlingly, however, whereas the Ford’s bow represents the latest in civilian hydrodynamics—not just bulbous and projecting, but also tipping up—CV18’s bow more closely resembles Liaoning (Project 11436)’s style than CV17’s.

There are also four sets of emergency diesel engines for a total of 8MW. China has considerable experience with low-RPM diesels through its civilian merchant ship production. Implementing this in practice would make CV18-19 the first hulls of only the second class in the world to have both a nuclear power and a conventional propulsion plant arrangement, the existing example being the Russian Kirov class.

In a sign that the model shop may be trying to fill blank space, and orders, CV18’s ~70 carrier-based aircraft are identical to CV17’s, with the following exceptions. Attack UAVs are added, while Ka-31 early warning helicopters are eliminated, presumably because more-advanced JZY-01 airborne warning and control system (AWACs) aircraft can take off from the flat deck. On the actual CV18 model itself, the relevant aircraft on the flight deck has two engines and is consistent with the JZY-01. This aircraft might in theory be outfitted with a smaller variant of the KJ-2000’s active electronically scanned array (AESA) radar.

Weaponry listed on the CV18 model’s nameplate is similar to that on CV17’s: 6 sets of 30 mm single-tube artillery, four sets of HHQ-10 point defense missiles, and—somewhat speculatively—four sets of laser anti-missile systems. However, only two sets of HHQ-10 are actually seen on the model, on the forward sponsons. The model clearly shows the same Gatling gun installation as on Liaoning with four H/PJ-14 or the Type 1130. Electronic equipment listed on the nameplate includes a “battle of chaff induced injection device” and a SLQ29 radar warning and jamming system. The last is puzzling, as it is an old U.S. Cold War era system. Perhaps the model shop’s designers needed to add one last detail in time for holiday orders?