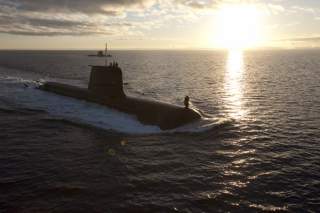 There has been considerable public debate about Australia’s future submarine program with much of the focus being centered on whether submarines should be produced locally or procured offshore. But surprisingly little of the debate has touched on the imperative to avoid a capability gap once the Collins-class submarines begin to be retired from service in the latter half of the next decade, nor on how Australia might best utilize existing sovereign submarine capabilities to achieve that.

Given the unique nature of the Australian requirement, it seems highly unlikely the solution for Australia’s future submarine would be either an “off-the-shelf” purchase from an offshore supplier or an onshore design-and-build activity. Notwithstanding the fact that Australia doesn’t have the design capabilities to go it alone on the future submarine program, any existing design would need to be customized with a US combat system and weapons while an appropriate indigenous design would obviously have significant cost, risk and time implications. Instead, the optimum acquisition strategy for Australia’s future submarine program is likely to fall somewhere between those two approaches as part of a “hybrid” design-and-build process.

While it’s clear that Australia cannot, and should not, undertake the enormous venture of the future submarine on its own, there are many reasons why a collaborative approach, encompassing Australia’s sovereign capabilities in submarines and the sovereign capabilities of a partner nation with experience, capability and capacity in large conventional submarines, would be sensible, practical and feasible.

Such an approach would draw upon the submarine design capabilities of an international partner; a US combat system and weapons (based upon ‘spiral development’ of the Collins class combat system); Australian industry’s existing naval integration capabilities; and the submarine sustainment capability resident in-country. It would also facilitate the inclusion of leading-edge international and Australian technologies, build on Australia’s sovereign submarine capabilities, and provide considerable work for Australian industry. Overall, it would result in the lowest cost/risk approach to the provision and sustainment of a new submarine capability for Australia.

From a capability perspective such a collaborative approach would facilitate the timely provision of an appropriate future submarine capability for Australia on a schedule that would militate against a capability gap once the Collins-class submarines begin to be retired from service in the latter half of the next decade.

That said, the Government doesn’t have the luxury of time in their decision-making process. It’s clear that to avoid a capability gap, Australia should confirm its acquisition strategy and move as soon as practicable to establish a long-term collaborative partnership for the design and build of the future submarine. Raytheon Australia has now released its own paper, which confirms that if the first future submarine is to be in the water by 2026, an acquisition strategy needs to be settled now.

From a defense industry perspective, such a collaborative approach would provide many new, long-term Australian jobs. That’s a view that has been articulated by ASPI, argued by Government and confirmed by our own analysis.

To be clear, the likely roles for Australians under a collaborative design-and-build model would, at a minimum, include: mission system design—working closely with an offshore designer; mission system integration; hull consolidation; test and activation; and the substantial task of sustaining the submarine throughout its approximately 30-year operational life. Potential also exists for a level of in-country platform assembly. Such a collaborative approach would also require a substantial Australian supply chain.

Through a collaborative approach with an international partner, Australia has the potential to acquire the most capable conventional submarine in the world, optimized for its needs while delivering maximum value for money for the taxpayer. That means Australian industry has every reason to welcome the opportunities presented by the SEA1000 future submarine program.

This article first appeared in ASPI's The Strategist here.