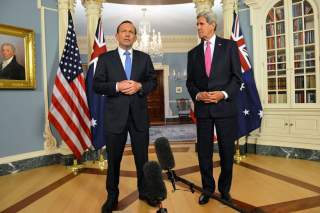 It’s time for Australians to come to grips with their more troubling security outlook and debate how best to strengthen their deterrence and defensive capabilities. That’s the core message in my essay Game Plan: The Case for a New Australian Grand Strategy, which was recently published by the Menzies Research Centre. Let me summarize a few of the key points for fellow readers of The Strategist.

What are some of the major changes in Australia’s security outlook? Let me touch on just six.

First, Australians need to appreciate that the Western allies no longer dominate the Western Pacific economy. The global balance of power is shifting markedly.

Second, we need to appreciate the unusual nature and massive scale of China’s military expansion. In particular, the People’s Liberation Army is not trying to match the US ship-for-ship, aircraft-for-aircraft or tank-for-tank. China’s asymmetric strategy rather places emphasis on building surveillance, missile, submarine, counter-satellite, cyber, and other capabilities that place the Western allies’ concentrated bases at risk, conventional force structures, and vulnerable logistic systems.

Beijing’s assertive international strategy is an even more fundamental change in Australia’s security environment. From a largely introverted posture 20 years ago, the regime in Beijing is now championing nationalist causes offshore, largely to reinforce its domestic legitimacy. That has driven the Chinese to launch aggressive cyber operations against Australia and its close allies, engage in dangerous confrontations with Japanese forces in the East China Sea, harass American ships and aircraft and dredge up new islands to reinforce its assertion of sovereignty over 80 percent of the South China Sea.

A fourth major change is that the US has morphed into a less confident and more hesitant ally. While Washington has announced a rebalancing of its forces to the Pacific, with some 60% of US naval and air assets planned for deployment to the theatre by 2020, the resources to implement the rebalance have been limited. US readiness levels have fallen and Washington has shown itself to be easily distracted by crises elsewhere.

In short, the strategic tides in the Indo–Pacific have been flowing against the US and its allies. Symptomatic of the shift is that during the last decade China’s defense spending quadrupled whereas US defense spending rose by a total of only 12%.

For Australia, the strategic implications of these developments are profound. During the Cold War, the center of superpower competition, tension, and potential conflict was in Central Europe. Australians became used to being located in a strategic backwater. But now the situation is markedly different. Whether we like it or not, we now find ourselves close to the center-stage of major power competition, international tensions and potential conflict.

Japan, India, and most countries in Southeast Asia broadly share Australia’s unease and in differing ways are taking steps to reinforce their security.

What should be the core themes of Australia’s grand strategy in this new era?

There’s clearly a need to accelerate the strengthening of Australia’s independent defense capabilities. At a minimum, this will mean boosting defense spending to 2% of GDP by 2022, as currently planned.

Given the heightened security concerns of most of our neighbors, there’s a strong case for further strengthening Australia’s security partnerships in the Indo–Pacific to reinforce regional resilience and confidence.

Several specific initiatives deserve considerations that have the potential to turbo-charge the Australia–US alliance.

First, Australia could reinforce American, Singaporean, and other regional efforts to enhance the maritime domain awareness of partner countries in the Indo-Pacific. Working with regional partners to develop a common operational picture of the maritime domain would strengthen local defenses, reinforce practical cooperation and help to bolster regional confidence.

Second, the United States and most of Australia’s other security partners currently have difficulties accessing a comprehensive network of military exercise and range facilities in the Indo–Pacific. This is a growing problem for the United States as it looks to position the bulk of its naval and air forces to the theatre. Relocating extra forces forward is one thing, but maintaining them in this theatre in a high state of readiness is another challenge altogether.

Australia already possesses exercise and range facilities that are large, relatively uncluttered, and feature diverse air, sea, and land environments. Australia could readily establish an Indo–Pacific Exercise and Range Complex that could be made available to its close allies and security partners on agreed terms and conditions. This would make extended American force deployments to Australia and its surrounding region much easier, more effective, and less expensive.

Third, the major changes under way in the Indo–Pacific are already forcing Australian and US defense planners to re-think many assumptions about future operations in this theatre. In consequence, there would be benefit in forming a small, high-quality Australia–US Strategic Planning Group.

Fourth, there is scope for Australia to exploit its strong track record for quality intelligence products, its geo-strategic location, its high quality workforce, and its technological sophistication by investing strongly to become the intelligence hub for close allies in the Indo–Pacific.

Fifth, Australia already hosts a number of facilities that support US and allied space programs. There’s scope for Australia to do more in this field to strengthen allied command resilience and operational capabilities in the Indo–Pacific.

Finally, the Pentagon is facing dilemmas as it contemplates basing modes in the Western Pacific for the coming half century. US basing in the region is currently over-concentrated and operationally constraining.

Canberra could assist greatly. Lowy Institute polling reveals that more than 80% of Australians support the alliance with the US, and well over 60% support the idea of US forces being permanently based in the country. What’s more, this friendly sentiment is mutual. US service personnel consistently rate Australia as one of the most desirable overseas locations to visit.

There now appears to be scope to negotiate extended deployments of US forces at joint Australia–US facilities. This could ease pressure on American basing in the Indo–Pacific, provide a much firmer, more dispersed, and more resilient allied operating presence and reinforce allied deterrence in the theatre.

The bottom line is that it’s time for Australians to consider how best to ensure the country’s security in a far more challenging Indo–Pacific region.

Image: Office of the U.S. Secretary of State.