Is Australia About to Buy Japanese Submarines? 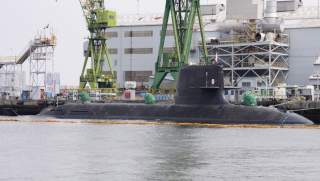 There has been a flurry of public commentary following yesterday’s News Limited claims that Australia is about to enter into a commitment to buy our next generation of submarines from Japan. The local submarine community has been concerned about that possibility for some time, and senior members of the Submarine Institute of Australia have been writing to Defense Minister David Johnston—and others—since January of this year warning against such a decision.

Understanding what’s happening is difficult because the speculation appears based on remarks apparently made by Prime Minister Tony Abbott to his Japanese counterpart Shinzo Abe about such a course of action. The concerns have been reinforced among some observers by Abbott’s interest in strengthening Australia–Japan–US defense ties—something in turn being driven by the rise of China. Yesterday Prime Minister Abbott did nothing to dampen the speculation, stating that future submarines were about capability, not about local jobs. As an aside, those sorts of comments also serve the PM’s aggressive political style, jabbing a finger into the eye of the current South Australian Labor Government.

However, the chances of the Federal Government making a unilateral decision to sole source a Japanese solution seem low—and if the Prime Minister were to insist on that particular course of action there could be a serious Cabinet and back bench revolt. Not only would such a decision constitute another broken promise—the word ‘another’ would presumably be contested by the PM on the basis that no promises have been broken to date—but it’d almost certainly lead to the loss of Federal seats in South Australia (Hindmarsh for sure, perhaps Boothby and Sturt), as well as generate enormous resentment within institutions no less than the Royal Australian Navy, the Department of Defense, trade unions and a stack of industry associations, amongst others.

There has been bipartisan agreement that the Kinnaird–Mortimer two-pass procurement system is a sound, if cumbersome and slow, approach to Defense contracting. A unilateral decision in favor of a Japanese submarine would completely trash that in favor of a whimsical choice based on a variety of external factors. Of the conventional submarine designers in the Western world that Australia would look to for technology, Japan is the least well known—by far. All that can be said is that the Soryu Class appears to be a large, capable submarine—and it’s the latest in a series of large, capable submarines of roughly the size our Navy hopes to acquire.

But after that generalization, things quickly become extremely complex. Would Australia commit to an off-the-shelf design for a foreign Navy that uses different weapons and sensors to those employed by either Australia or the U.S. Navy? How would such submarines be supported in Australia and at what cost? How would crew training be managed—not a trivial matter—especially as Japan has never before exported a submarine? Even providing manuals in English for the tens of thousands, possibly hundreds of thousands, of individual pieces of equipment that make up a submarine would be a hellish job.

Still, the idea certainly has momentum and a large Japanese delegation recently visited ASC (apparently at the direction of the Department of Prime Minister & Cabinet) to be given a very thorough tour of the facility. Given the secrecy that surrounds submarine construction, this move was highly unusual and has raised eyebrows in defense circles. To date, there has been no known reciprocal visit to Japan.

There’s some poetic justice in all of this. The RAN and the Department of Defense have been dragging the chain for so long on SEA1000 that they’ve left themselves vulnerable to these sorts of random outside ideas. Part of the institutional paralysis is the result of the extraordinary continuation of the debate about whether or not Australia is capable of designing a new submarine. The answer is clearly ‘no’, but nevertheless the internal arguing and bickering seems to continue. Another bizarre distraction appears to be OH&S legislation and the potential impact this might have on a future design, which is being studied to death. Why the Department doesn’t simply request an OH&S waiver and just get on with it is beyond me.

If the thought-bubble idea from the Prime Minister of buying Japanese submarines finally jolts the Department and Navy into firming up their plans and actually doing something that will be no bad thing.

Kym Bergmann is the editor of Asia Pacific Defense Reporter and Defense Review Asia. This article first appeared in The Strategist here.