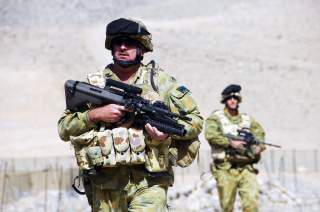 Australia has no plans to tighten scrutiny of its arms trade under a controversial new export drive announced on January 29. While the government aims to ramp up foreign sales, rights groups fear that more Australian weapons will end up in the hands of repressive regimes, especially in Asia and the Middle East.

The federal government said on Monday it will set aside funding of A$3.8 billion (US$3 billion) to lift Australia into the world’s top 10 weaponry exporting nations. It is now the 20th biggest arms supplier, according to Stockholm International Peace Research Institute data, with annual earnings of about US$1.6 billion.

From 2012-2016, Australia accounted for a negligible 0.3% of world exports, with most its arms going to the United States (52%), Indonesia (21%) and Oman (10%). Other big buyers were India, Singapore, Japan, Indonesia, the Philippines, Yemen, Papua New Guinea, Saudi Arabia and the United Arab Emirates.

Thales exports combat vehicles, munitions, command and control systems and optronics; Raytheon sells ship combat systems and BAE a range of autonomous and guided weapons systems. In 2016, the top 40 contractors generated a record turnover of A$10.384 billion (US$8.4 billion), an 11% increase on the previous year.

Defense Industry Minister Christopher Pyne said the export strategy will mostly be aimed at markets in the US, UK, Canada and New Zealand, the other members of the so-called “five eyes” security alliance that pools intelligence on Pacific Rim countries, including China and North Korea.

However, Pyne said the government also wants to use weapons sales as a means for “cementing relationships” with key countries in volatile regions like the Middle East, a statement that immediately set off alarm bells among human rights groups. Pyne has recently visited the United Arab Emirates (UAE) and Saudi Arabia.

Details of weapons exports are not disclosed by Australia for reasons of commercial confidentiality, making it difficult to track specific shipments.

However, it is known that at least four contracts have been approved for equipment sales to Saudi Arabia in the past 12 months, even though its regime is leading a military campaign against Houthi rebels in northern Yemen that the United Nations says has killed more than 10,000 people.

Saudi Arabia’s Arab alliance claims that the Houthi, who overthrew the Yemeni government, are being trained and supplied by its bitter enemy Iran. The Saudi-led coalition also includes the UAE, which Pyne nominated as a likely market for increased Australian weapons under the new export drive.

Weapons have been sold at least since 2015 to the UAE, which has been accused of human rights abuses in both Yemen and Libya. Bahrain, another Saudi coalition member, has been sold surveillance equipment in recent years by iOmniscient, an Australian intelligence company.

Shipbuilder Austal confirmed after Pyne’s 2017 visit that Saudi Arabia had opened talks on the possible sale of high-speed support naval vessels, believed to be based on a catamaran hull supplied to the US Marines. Oman, a long-time Saudi ally, took delivery of two similar Austal vessels in late 2016.

Australia already supplies the Arab coalition with an undisclosed range of weapons and conducts joint naval exercises with the Saudis. It has sold 10 high-speed Austal patrol boats to the Yemeni regime that were designed for anti-piracy patrols, but can also be adapted for military operations.

Rights watchdog Amnesty International said it was astonished that Australia was looking to expand its weapons sales while the coalition’s brutal offensive was underway.

“We have been asking the Australian Government for some time now to publicly report the exact nature of all arms transfers to the Kingdom of Saudi Arabia to date and to its allies in the war in Yemen, and to cease the authorization of future arms transfers while there remains a substantial risk these arms will be used to fuel human rights abuses,” it said.

In Southeast Asia, Australia has shipped a range of military hardware to the Philippine government, which is responsible for the deaths of an estimated 12,000 people, mostly poor urban dwellers in a 15-month “war on drugs”, according to Human Rights Watch, a US-based rights lobby.

Philippine police have also been accused of summary executions of activists, including human rights leaders speaking up against the drugs campaign.

As a signatory to the Arms Trade Treaty, a pact which aims to block weapon sales to security forces that might violate global human rights laws, Australia uses a set of controls that assess export applications according to whether they comply with its international obligations, and meet criteria for national security, human rights, regional security and foreign policies.

Unlike some European countries, Australia does not assess whether military equipment and technologies that were sold for peaceful uses might be used instead on the battlefield, or against political opponents.

In the first six months of the 2016/17 financial year, 6.5% of arms sales applications were rejected for being either “sensitive” or “complex”, but it was not disclosed why they were unacceptable or where they were to be sent.

There is a blacklist of countries that can’t receive Australian weapons, likely based on a similar US index: it is assumed North Korea, Cuba and Syria are near the top of the no-sale list. But, again, Australia chooses to keep this information under wraps.

Pyne did confirm that no export licenses had been granted in the past two years to Myanmar, which has a long history of human rights abuses seen most recently in its “ethnic cleansing” of its minority Rohingya population. But Myanmar lacks the same market appeal of cash-rich Saudi Arabia and the UAE.

This article by Alan Boyd originally appeared on Asia Times.