Australia Can Lead the G20 Back to Economic Freedom 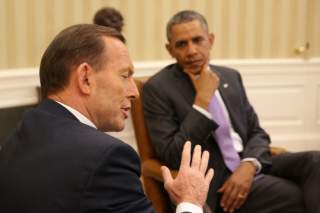 President Obama and other G20 leaders should listen carefully this weekend (Nov. 15-16) in Brisbane, because Australian Prime Minister Tony Abbott has a powerful story to tell them about economic revival.

Abbott hopes to focus the gathered heads of state— representing some 80 per cent of the world’s Gross Domestic Product—on how to boost economic growth because, as he says, stronger economic growth is the key to addressing almost every global problem.  Growing economies tend to produce more jobs, better infrastructure, freer trade and greater international co-operation.

While the Abbott government actively pursues free trade, the Obama administration has dragged its feet. It blocked approval of Free Trade Agreements (FTAs) negotiated in 2007 with South Korea, Colombia and Panama, then spent nearly four years renegotiating them. It has also dragged out negotiations for Trans-Pacific and Trans-Atlantic FTAs, and made no attempt to push an FTA for Brazil. Its support of the pro-market “Pacific Alliance” trade area of Chile, Colombia, Costa Rica, Mexico, Panama and Peru has been lukewarm at best.

On the home front, President Obama has followed the EU mega-welfare-state model, ramped up government spending, and added onerous layers of regulation. In the latter area, the U.S. president has far outdone the Europeans.

The Competitive Enterprise Institute reports that the U.S. Code of Federal Regulations (CFR)—the "codification of the general and permanent rules published in the Federal Register by the departments and agencies of the Federal Government"—filled 175,496 pages by the end of 2013.  In Brussels, the “Acquis”—the European Union’s rough equivalent to the CFR—tops out at roughly 170,000 pages.

What’s worse, under Obama the CFR has been growing. According to the Competitive Enterprise Institute, 63 Federal departments, agencies and commissions issued 3,659 rules last year, yet Congress passed and the President signed just 72 laws. That’s a ratio of 51 new regulations for every new law!  Overall, in his first five years in office President Obama added 17,522 pages of regulations to the CFR, an 11 percent increase in the size of the regulatory state.

The Abbott government, however, has gone in the other direction.  Under its twice-yearly “Red Tape Repeal Day” it has now eliminated more than 57,000 pages of unnecessary red tape under a plan expected to save Australian taxpayers at least $2 billion per year.  Although the mechanics of regulation are different in the U.S. and Australia, there can be no mistaking the starkly different approaches of the Obama and Abbott governments.  Obama wants to grow the administrative state, while Abbott wants to rein it in.

Perhaps PM Abbott’s most exciting move to date has been his government’s repeal of carbon and mining taxes.  Such regressive taxes destroy jobs, retard economic growth, and fall most heavily on the poor. Even sadder, they don’t make a dent in global greenhouse gas emissions and therefore have no noticeable impact on global temperatures.

In short, the Aussies are busily taking steps to grow their economy. Meanwhile, the U.S. economy remains hamstrung by the unworkable complexities of Obamacare, a heavy-handed, top-down approach to financial regulations, wrong-headed energy and environmental policies, and a whole host of other problems that have resulted from too much government.

Much of the EU faces the same problems, and for the same reasons.  A voracious appetite for spending by EU governments is eating up nearly 45 percent of GDP.

Prime Minister Abbott wants other G20 countries to send the same message to their citizens that he is sending to Australians, that the country is open for business—not hostile to it.

After last week’s midterm elections, President Obama said that he had heard the message delivered to him by the American people.  Let’s hope he listens to our friends down under, too.

James M. Roberts is a Research Fellow For Economic Freedom and Growth at the Heritage Foundation. Before joining Heritage in 2007, Roberts served in the State Department for 25 years. As a Foreign Service Officer, he completed tours of duty at U.S. embassies in Mexico, Portugal, France, Panama and Haiti. He also worked on a wide variety of international trade issues and helped to coordinate major U.S. assistance programs, including efforts to reform Eastern Europe economies and to reconstruct Iraq.