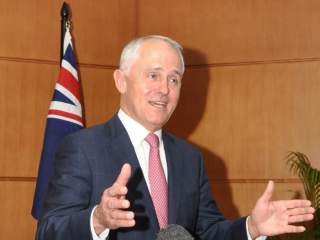 The reaction to Prime Minister Malcolm Turnbull's speech at CSIS this week revealed once again some of the fault lines in the debate over the Australian-American alliance.

Hugh White contended that Turnbull had failed to live up to some of his earlier pronouncements on the implications of China's rise for American power in Asia. Although White characterized this as a “missed opportunity,” he also conceded that it was no surprise that Turnbull did not choose his first visit to Washington to wade into the more provocative question of what growing Chinese muscle might mean for the coordinates of America's regional strategy.

Partly in response to White, Greg Sheridan labeled it “fatuous” to claim that Turnbull “changed in any manner…the tone” of the relationship with the United States.

Former ONA chief Allan Gyngell acutely characterized the speech as notable for its “absence of absolutes.” And Tom Switzer placed Turnbull in the camp of those Australian leaders who, while strongly committed to the Alliance, are “noticeably less idealistic” about the relationship.

No one argues that the Prime Minister's speech in any way signals the start of a drift away from Australia's sturdy alliance moorings. But Turnbull is on record before he came to the top job of warning about the hollowness of “extravagant professions of loyalty and devotion” to the United States and the need not to get “doe eyed” in the presence of the American president. And he remained true to such statements in Washington.

In his prepared remarks Turnbull detailed a shared history of sacrifice, discussed the importance of common values and dismissed those who countenance American decline. But it would be difficult to find an Australian prime minister in the last 60 years not giving a version of this kind of language on visits to the U.S. capital. It is a virtual rite of rhetorical passage.

There was, however, a noticeable shift in tone and a welcome addition of nuance in his remarks. It contrasted sharply with the rhetoric of both Julia Gillard and Tony Abbott, whose words in Washington in recent years carried more than a faint whiff of uncritical subservience.

Recall that Gillard told Congress in March 2011 that “Americans can do anything” and that Australia will be “an ally for all the years to come.” Remember too Tony Abbott's speech to the Washington-based Heritage Foundation in July 2012 in which he said that few Australians would regard America as a “foreign country,” before going on to almost will the Americans to rediscover the belief in themselves.

But it is not the job of Australian leaders to stoke the fires of triumphant American nationalism or pump-prime the U.S. exceptionalist impulse. Rather they should be taking every opportunity to offer the administration their independent judgement: to advise caution, prudence and restraint. Especially after recent Middle East wars that have cost America dearly in blood, treasure, credibility and prestige. This is why Turnbull's speech is worthy of reflection. What he most decidedly did not do this week was tell the Americans only what they wanted to hear.

Thus on the question of the threat of ISIS in the Middle East, Turnbull raised the question of partition as a possible solution to the crisis in Iraq and Syria; that is, the creation of an independent Sunni state encompassing parts of eastern Syria and western Iraq. Neither Abbott nor the Obama Administration has ever supported this proposal in public. Turnbull at least put it on the table for consideration.

And on the question of China's rise, and in particular freedom of navigation patrols through the contested reefs and shoals of the South China Sea, there is every possibility that American officials would like to have seen, and see, a more robust Australian response to recent Chinese activity there. But Turnbull was categorical in asserting that Australia would not support unilateral action, and that the question of competing claims to these outcrops should be secondary to holding China to account on its intentions. The pressure he placed on Washington to ratify the UN Convention on the Law of the Sea was entirely in keeping with how a responsible ally should behave: namely advising the Americans about how and where their regional leadership might be diminished.

Some may long for a grand armada of U.S. allies sailing through the South China Sea, a flotilla following the U.S. Navy within the twelve nautical mile limit, the stars and stripes billowing in the breeze. Indeed Labor's shadow spokesman for Defence—probably trying to out hawk the hawks—now forms part of this troupe. But to date no U.S. ally in the region has signaled a preparedness to do so. In their heart of hearts, there is no doubt that the Americans are disappointed. But the Alliance will survive.

It is of course true that the history of Australia's relationship with the U.S. is littered with examples of prime ministers departing from the American line, whether it be Menzies over the Taiwan Straits crisis, Suez and West New Guinea confrontation; Whitlam over the end of the Vietnam War and the shape of a new Asia; or Hawke, Hayden and Evans over U.S. policy in Central America, the Strategic Defence Initiative and thorny trade issues. John Howard, too, refused a request from George W Bush in 2004 for more Australian troops to be sent to Iraq.

The idea that Tony Abbott's decision to join the AIIB is worthy of inclusion in this tradition is problematic: Australia was one of the last to join the bank, and only did so after Britain jumped in. That's not to say Australian officials didn't think carefully about the implications and consequences of joining, and about how the Chinese might use the institution – but only a brave soul would notch this one up as a mark of heroic Australian “independence.”

Over the last two decades, however, we have witnessed an extraordinary bipartisan intensity in the Alliance, one that has in some ways begun to distort how Australia presents itself to the region and the world. Turnbull's speech in Washington may very well have exhibited a difference in degree rather than kind in terms of alliance rhetoric, but that fits perfectly the current moment. It is a time for shades of grey, not thunderous absolutes. In light of the rather exuberant flights of oratorical fancy we have been served up in recent years by Australian leaders in Washington, Turnbull's subtler tone is not one to dismiss lightly.

James Curran teaches courses in Australian political culture and foreign policy and the history of America's relations with the world. In 2013 he was the Keith Cameron Professor of Australian History at University College Dublin, and in 2010 held the DFAT/ Fulbright Professional Scholarship in Australia-US Alliance Studies at Georgetown University in Washington, D.C. This article first appeared in the Interpreter.