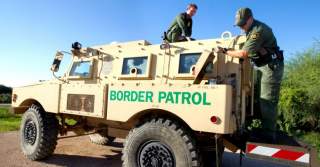 Flash back three years ago, and remember when the secretary of Homeland Security declared “the border has never been stronger.” Well, if what is going on at America’s border with Mexico is a success, Americans should shudder to think what failure looks like.

Unaccompanied children crossing the border is up over 70 percent this year. Other categories and overall numbers are on the rise as well, reflecting significant increases since 2014. And it is not just the numbers that are troubling to Americans. They are worried about national security threats on the Southern border.

While the debate often flares around issues of terrorist travel, illegal immigration, and border walls, what is often lost sight of is the number one threat that fuels every facet of dangerous illegal activity on the border with Mexico—the transnational criminal organizations (TCOs) in Mexico and Central America.

The groups are not just drug mafias—they smuggle, steal, hijack, rob, or kill (anything that makes a profit). And, it is not just an American problem. By some estimates, since 2007 the cartels are responsible for over 100,000 deaths.

The organizational structure of these criminal enterprises (due to infighting and competition as well targeting high-level leadership by Mexican authorities) has changed significantly over the last decade.  Nevertheless, the cartels remain a powerful threat—branching out into new forms of business like stealing oil and expanding markets for illegal drug exports and arms marketing in Latin America, Africa, Asia, and Europe. In addition, the cartels continue the trend of deepening ties and outsourcing operations to tier one transnational gangs.

Even the U.S. illegal immigration problem on the border is really a cartel problem. The cartels tax aliens that want to cross the border, as well charge multi-thousand dollar fees to guide border crossers.

It appears these groups are at the root of much of the criminal activity on both sides of the border. It is estimated that the cartels do over $64 billion in illegal activity in the U.S. Local, state, and federal officials on the U.S. side often feel outgunned, outmanned, and overwhelmed.

At the pointy end of the problem, integration of operations and sharing of information are becoming more and more common practices. In Texas, for example, it is not uncommon to find Border Patrol and Texas Highway Patrol riding in the same car. But this is not enough.

There are more than a few concerns that meddling directives from Washington and federal in-fighting are making the challenge of battling for control of the border worse. Homeland Security Investigations, an investigative arm of the Department of Homeland Security, has a reputation of being the worst of the worst.

If the departments of Homeland Security, Justice, and State worked in partnership with states and local communities going after the infrastructure and networks that facilitate the criminal activity destroying the safety of the Southern border, much could be done. Real integrated, serious effort and partnership is the number one action that would make a substantive difference in winning our border back.

Texas, for example, has spent about a billion dollars for sustained operations on the border over the last two years, trying to supplement and plug the gaps that the federal government isn’t covering.

On the borders there are many cost-effective ideas on how to wrestle control of the border back, particularly in the key smuggling areas like the Rio Grande corridor in Texas.

But it has to be a better joint effort—because the cartels get a vote. When the cartels come under pressure, they fight back. And, if they lose ground, they shift tactics or change geography—bouncing back from Arizona to California, Texas, and back.

Action on the border has to be paired with a responsible immigration enforcement policy. Further, the U.S. effort has to be global going beyond just going after the operations just in Mexico, El Salvador, Honduras, and Guatemala. The cartels are doing business all over the world—the U.S. has to go after its critical infrastructure wherever it is.

This first appeared at The Daily Signal here.