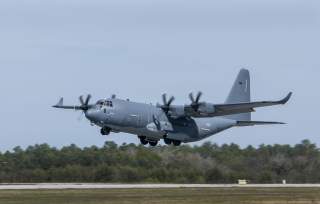 The company will upgrade the aircraft so that it is able to better detect, identify, locate, deny, degrade, disrupt, and defeat various threats that aircrews might encounter inside hostile airspace.

“With our all-digital system, we’re leveraging the latest, most advanced EW technology to create a highly mission-customized solution so that SOCOM’s fleet remains capable and protected in the harshest of environments,” said Brian Walters, vice president and general manager of Electronic Combat Solutions at BAE Systems.

“This award builds on our strong EW legacy and extends our proven capability to large fixed-wing aircraft.”

BAE’s Radio Frequency Countermeasure (RFCM) system is designed to be integrated into both the Air Force’s AC-130J Ghostrider and MC-130J Commando II aircraft according to the company. The two versions of the aircraft are similar, but the AC-130J is a specialized gunship variant.

“With this new system, BAE Systems expands the operational capabilities of the AC/MC-130J, allowing it to detect and defeat both surface and airborne threats,” BAE states in a press release.

The company will now integrate and install its EW systems onboard the special operations Hercules over the next 30 months.

According to BAE, the contract’s total value could exceed $300 million if SOCOM executes all of its options.