Tale of the Tape: Comparing Chinese and American Strategies in Asia 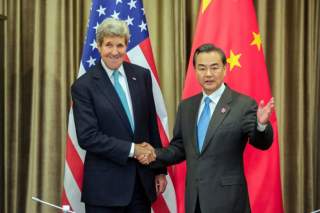 What does President Obama hope to achieve during his trip to Beijing for the APEC summit? How does he assess his ability to accomplish his China agenda?

There is no shortage of issues to discuss with Xi Jinping.   The two countries ostensibly share concerns about an unstable nuclear North Korea, Iran’s drive toward nuclear weapons, and the failing old order in the Middle East. But little progress has been made.  While Xi talks about a “new-type of great power relationship,” he seems to mean the U.S. should come to China as a supplicant, as National Security Advisor Rice did recently, asking for China’s help on the Middle East—now of equal importance to Beijing and Washington.

The presidential visit comes at a perilous time for Sino-American relations. Washington has not adequately answered China’s continued aggression toward Japan and Southeast Asian nations. Moreover, the People’s Liberation Army is continuing to harass the U.S. military operating in Asian seas.

U.S. Asia policy is not progressing because both Washington and Beijing are now overestimating China’s rise and underestimating the sustainability of American power.  This is a dangerous trend in perceptions with some grounding in reality. From Washington’s perspective, the Sino-American relationship will be unproductive if both sides think the balance of power now favors China.

Better policy outcomes require a reassessment of the balance of power that goes beyond straight counts of military forces and capabilities.  Trends in the military balance must be viewed in the context of each country’s preferred approach to the region as well as an accounting of the internal political obstacles hindering each side’s strategy.   The key questions are: What is each country trying to accomplish? What is each country’s strategy?  How well is each side implementing its strategy and what are the obstacles in the way of the outcomes for each country?

Since the end of WWII, the U.S. has pursued a strategy of primacy.  Successive U.S. presidents have found that a “preponderance of power” best served its Asian interests, which have included:

1.  Defending the U.S. homeland far forward. In the post-Pacific war period, the U.S. created what used to be called the “defense perimeter,” now referred to as the First Island Chain.  The forward U.S. defense posture begins along the island chains and territories from Korea through Japan and the Ryukus, and the Luzon Strait down through the Philippines;

2.  Preserving a favorable balance of power in Eurasia, so that no power can dominate the continent;

4. Maintaining and continuing to refine the liberal international order consistent with the “U.S. way of life,” as the framers of the U.S. Cold War strategy put it;

5. Supporting a network of allies who assist in reinforcing that order.

America’s grand strategy of primacy has been a success. It has tamed security competitions between historic Asian rivals and created the conditions for economic growth and peaceful transitions to democracy throughout Asia.  Countries that had the capacity to develop nuclear weapons were persuaded not to do so.  Asia’s rising wealth and power is not a coincidence.  Rather it is the result of wise decisions by Asian elites, the hard work of Asians to better their lives, and U.S. primacy.  It is no wonder that successive presidents have stuck with primacy.

The Military Structure of Primacy

U.S. primacy in Asia has required a forward basing posture for combat aircraft, large numbers of SSN and SSBN submarines, and carrier strike-groups to project power in Asia.   These assets provide a continual deterrent against conflict. U.S. “boomer” submarines, armed with ICBMs, lurk underwater ready to act should the U.S. face an existential threat. Carrier strike groups serve as highly visible symbols of U.S power to deter would-be aggressors.  Depending upon the global security situation, the Navy can have up to five carriers strike groups base in Japan and along the U.S. Pacific coast.

These air-sea forces allow the U.S. to control the commons when necessary. [1] The ability to take command of the air, sea, and space has allowed the U.S. military to summon overwhelming force anywhere and anytime it needs.  For the U.S. to continue to be the prime player in Asia, it must retain the ability to command Asia’s commons.  This requires that alliances are maintained, new partnerships are cemented and the “infrastructure” of command— the tankers, airlift, and large surface ships necessary for the quick deployment of U.S. forces—is modernized and ready.

As China’s wealth and power increase, its influence and ambitions in the Asia-Pacific expand.  The Chinese Communist Party’s (CCP) march towards achieving regional hegemony is driven by the CCP’s paramount goal of maintaining its grip on power.  That does not mean an inward turn, as many misinterpret.  While Beijing faces  “internal” challenges such an increasingly dynamic and wealthy populace, and a restive empire that includes Xinjiang, Tibet, Hong Kong, keeping a grip on power requires far more:

1. Ensuring that the world remains “safe” for autocracies.  At the very least it must stop any attempts by the U.S. to press for Chinese liberalization, and prevent the formation of democratic groupings in Asia;

2. Pursuing national rejuvenation.  The CCP argues that it is the vanguard of the Chinese project to regain prime status atop the political hierarchy in Asia, and reverse the “century of national humiliation” that it endured.  The CCP pours salt on this national wound in order to bolster its case to the Chinese public for a continued monopoly on power;

3. Continuing China’s economic growth, which now means defending China’s growing international economic interests. The PRC’s coastal areas house a large percentage of the country’s manufacturing and financial sectors.   Since the fall of the Soviet Union and the removal of a major threat to China’s land border, the PLA has been freed up to extend China’s southeastern maritime perimeter. The PRC wants greater maritime strategic depth, as well as an outlet into the Pacific and Indian oceans in order to protect its far-flung economic interests.

Military Strategy of the Aspiring Hegemon: Coercion and Counter-intervention

The CCP military strategy for regional hegemony has been the deployment of coercive combat power and counter-intervention (also known as A2/AD) capabilities in maritime East Asia.

U.S. military campaigns during the 1990s and early 2000s played a profound role in shaping the PLA’s regional security strategy.  In the two Gulf wars, the U.S. military displayed its unmatched precision strike regime.  The U.S. could deploy massive force to the region on its own timeline, because the U.S. military commanded the commons and American forces gained access to the states bordering Iraq through effective diplomacy.

During the 1996 Taiwan Strait Crisis, the CCP was horrified by its inability to contest the U.S.’s offshore military presence.  President Clinton dispatched two aircraft carrier groups off of Taiwan’s coasts in what must have been a haunting reminder of Western powers’ 19th century gunboat diplomacy against China.

The CCP realized that, even as it carried out a long-term naval modernization plan, it also needed to develop counter-intervention capabilities to prevent the U.S. from repeating its actions in the Gulf and the Balkans off of China’s seaboard.

The PLA has created contested zones in its “near seas,” allowing it to deny the U.S. access to the parts of the commons closest to China.  The PLA can now threaten the U.S’s logistical supply lines and the use of bases in Japan.  It can also contest space and cyberspace.  China’s military build-up includes a precision guided-missile force, undersea warfare, integrated air defense, counter-space and cyber capabilities, and bombers and aircraft that could deliver additional firepower against U.S. and allied assets.

Learning from the past two decades of U.S. wars, this military strategy is meant to exact a serious cost on U.S. military forces attempting to project power in the first island chain or the mainland.   For example, in the event of conflict, carrier strike groups, the iconic symbol of U.S. power projection, could face swarms of Chinese hypersonic cruise missiles, anti-ship ballistic missiles (or what are called in the press “carrier-killers”), and packs of diesel electric submarines.  The PLA air force’s increasingly modern aircraft provides China with additional range in striking U.S. bases and carrier groups. This strategy has undermined the foundations of U.S. primacy.

China’s same “counter-intervention” forces are also employed for a regional coercion strategy.  The CCP’s main target for possible military action remains Taiwan.  Its own precision strike regime – cruise and ballistic missiles launched from land, air and sea knit together with an increasingly sophisticated C4ISR system – could inflict the kind of pain on the island that NATO forces exacted on Serbian forces in Kosovo. The China that bemoans the gunboat diplomacy once practiced by the Western powers is now employing the same strategy against its neighbors.

Assessing the Balance: Command of the Commons Vs. Aspiring Hegemony