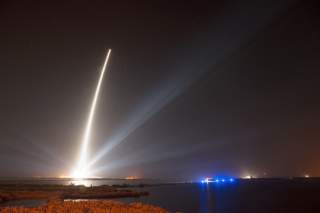 This week, the Senate Armed Services Committee will review the defense department’s budget request for the fiscal year beginning October 1.  One of the changes to the request committee chairman Senator John McCain is proposing is a ban on imports of the Russian RD-180 rocket engine.  Senator McCain is a patriot and passionate proponent of good government.  However, if Congress were to enact such a ban, it would endanger U.S. military access to space.

Here’s why.  Assured access to space, the top priority of the military space program, requires having two different types of launch vehicles capable of reaching any orbit.  That way, if one vehicle is grounded, the other is still available.  For the last ten years, access to space has been guaranteed by United Launch Alliance (ULA), which operates the Atlas and Delta rocket families.  ULA has a 100% success rate in getting satellites to all eight of the orbits used by the military.

The same cannot be said of SpaceX, the only other launch provider certified by the Air Force for military missions.  Its Falcon 9 rocket is only approved for four of eight national-security orbits, meaning that up to 40% of military launches over the next several years must reach space on either Atlas or Delta.  In addition, SpaceX does not enjoy ULA’s flawless launch record.  A Falcon 9 launch vehicle carrying a NASA payload exploded shortly after liftoff last June.

The problem with banning imports of Russian rocket engines is that two RD-180 engines made in Russia are used in the first stage of each Atlas rocket.  So if the engines weren’t available, Atlas would be unusable.  That would leave the Delta rocket as the only vehicle that can launch heavy satellites into high orbits — satellites that our military depends on to detect nuclear missile launches, eavesdrop on countries like North Korea, and provide secure global communications to combat forces.

If Delta then failed, there would be no way of getting these vital satellites to their assigned orbits.  Some members of Congress are opposed to relying on Delta for launching military payloads because it costs 35% more than sending the same satellites into orbit on Atlas.  So we know that if Russian engines were banned, space launch costs would increase for all those orbits SpaceX can’t reach.  But the larger problem is that we might not be able to get there at all.

Getting into space is dangerous business.  Rockets have to travel several miles per second to escape the Earth’s gravity, which helps explain why ULA’s perfect launch record hasn’t been matched by anybody else.  Grounding the workhorse of the U.S. launch fleet by banning Russian engines just makes it riskier and costlier to reach key orbits.  If Vladimir Putin tried to cut off U.S. access to Russian engines, it would be further evidence he is America’s enemy.  So how does it make sense for Congress to do what we fear Putin might do?

The right answer here is to let the Pentagon have the 18 Russian engines it says it needs until an American alternative is tested, certified and ready for launch.  Reasonable people can argue about whether Pentagon funding of an American alternative should focus mainly on new engines, or an entire new launch vehicle.  ULA is pursuing multiple alternatives, as are its competitors.  What is not reasonable, though, is to arbitrarily cut off access to a system that has worked well on dozens of launches before a safe alternative is in hand.

So the Senate should oppose any measure banning Russian engines, so long as the military provides assurances it is working hard to develop U.S.-made alternatives.  The worst thing the Senate could do in this moment of rising global tensions is to make it harder for the military to maintain its constellations of missile warning, secure communications and spy satellites.  Assured access to space is essential to guaranteeing America can deter nuclear war and win other conflicts.

This piece was sourced from the Lexington Institute