The Battle at Hudaydah: How Saudi Arabia Is Trying to Cut off Houthi Rebels' Maritime Supply Lines 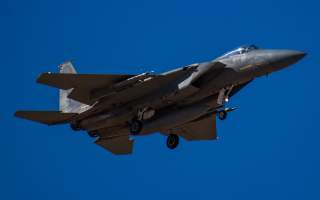 On June 12, 2018, the thunder of artillery, the rattle of armored trucks and the screech of jet fighters heralded an offensive by Saudi-backed Yemeni government forces aimed at Al-Hudaydah—a port city through which seventy percent of the humanitarian aid feeding Yemen’s beleaguered population arrives.

After a week of intense fighting, Hadi loyalist forces finally seized Hudaydah International airport, opening the way for further advances on the port facilities. However, though the Saudi-backed coalition hopes Hudayah’s capture may mark a turning point in their war with Houthi rebels, it also could potentially put hundreds of thousands of Yemenis at risk of death from starvation.

Yemen is the poorest country in the Middle East, and for a good part of the twentieth century it existed as two perpetually warring states. Yemen’s first president after unification, Ali Abdullah Saleh, first fostered and then turned against an Islamist movement called the Houthis, who were associated with the Zaidi sect of Shia Islam.

In 2011, amidst the upheaval of the Arab Spring, Saleh was forced to step down and his rival Abdrabbuh Hadi assumed the presidency. However, Hadi was not able to consolidate political support, and in 2014 the Houthis—now with Saleh’s backing—seized the Yemeni capital of Sana’a, adding a general civil war to a country already afflicted by Al Qaeda and ISIS-aligned insurgents. Saleh’s allies brought a large portion of the Yemeni Army in support of the Houthis, including its ballistic missiles force.

In 2015, Saudi Arabia intervened on Hadi’s side of the war, backed by a coalition of states including the United Arab Emirates, Egypt, Qatar, Sudan, Morocco, Bahrain and Jordan. Saudi jets began raining guided bombs all over Yemen, managing to hit an extraordinary number of civilian targets and killing thousands of civilians in the process. However, the Houthis frustrated Saudi ground forces, knocking out numerous poorly-deployed Patton and Abrams tanks in ambushes. They also fought back by sniping at ships with old Chinese anti-ship missiles, and lobbing ballistic missiles at targets in Yemen and Saudi Arabia, the former strikes killing hundreds. The UAE’s ground forces, however, met initial success spearheading an amphibious assault which captured the southeastern port city of Aden.

The Saudis accuse the Houthis of beings Iranian proxies, and sees Yemen as a battleground in a wider conflict with Tehran for control of the Middle East. There is no doubt that Iran and the Houthis share an affinity due to shared religious and anti-Western ideology, and that Tehran has provided some political and material support to the rebels. However, most regional experts maintain the Houthis are fundamentally local actors first and foremost, and evidence of major weapons transfers beyond small arms smuggling is scant.

The United States and Europe are also heavily involved in the civil war, proclamations of neutrality to the contrary. While the U.S. military only engages in direct combat operations against ISIS and Al Qaeda forces in Yemen, U.S. personnel are advising Saudi military planners, and U.S. tanker aircraft are refueling Saudi warplanes. Those warplanes, and the missiles and cluster bombs they are dropping on Yemen, have been supplied by the United States, France and the United Kingdom. The French newspaper Le Figaro recently revealed that French special forces were serving alongside UAE forces in Yemen in a non-combat role.

Despite the bombardment, the war in Yemen has devolved into a quagmire for the coalition, with the Houthi retaining control of the more populous cities in the western half of the country. At least ten thousand have died in the fighting, two thirds of them civilians.

However, UAE forces have consolidated support in m southern Yemen, particularly amongst separatists—to the displeasure of the Saudi-backed Hadi government. Meanwhile, in December 2017 Saleh attempted to negotiate peace with Saudi Arabia, causing infighting to break out with his former Houthi allies. He was killed attempting to flee Sana’a, allegedly shot in the head by a Houthi sniper after a rocket-propelled grenade disabled his SUV. Saleh’s troops then switched their allegiance to the Hadi cause. In 2018, UAE-backed forces have captured a string of towns on the southwest coast of Yemen—steadily approaching the port city of Al-Hudaydah.

Al-Hudaydah in the Crosshairs

The civil war has led to a collapse of the economy and basic medical services throughout the Yemen. Twenty-two million Yemenis (three-quarters of the population) depend on humanitarian aid to survive—and 8.4 to 10 million are on the verge of starvation. Yemen is currently suffering the largest recorded cholera outbreak in modern history, with over 1 million afflicted.

Hudaydah’s port is the maritime artery through which 70 percent of the humanitarian aid keeping Yemenis fed and treated flows. Houthi forces control the port city of six hundred thousand however, and the UAE claims the rebels collect $40 million in monthly revenues. Back in 2015, Saudi air strikes destroyed the port’s four huge cranes, and in 2017 coalition ships temporarily blockaded the city, cutting off the vital humanitarian lifeline—claiming Iran was running weapons through the port.

Hudaydah also sits at a vital strategic juncture, with an eastward highway leading directly to the Yemeni capital of Sana’a, only ninety miles away. Also nearby are the fertile croplands of the Tihama Plain, and a critical oil terminal to the north. If pro-Hadi forces capture the port, they could be in a position to cut off supplies to the Houthi-controlled interior of Yemen.

However, the Saudi-led coalition has yet to capture any major cities from Houthis since the battle for Aden—and the bloody, months-long sieges to capture Mosul and Aleppo remain within recent memory. The UAE foreign minister claimed that the new offensive, named Operation Golden Victory, would target the port and airport facilities, but not seek to capture the city itself: “You are not going to see a Mosul situation where air power will flatten whole city blocks.” However, containing a besieged enemy position behind enemy lines could prove difficult.

There are an estimated two to three thousand Houthi fighters defending Hudaydah, while pro-government forces number over twenty-one thousand troops—most of whom come from three different Yemeni factions. These include the Tihama Resistance, a local tribal militia, and three to five thousand well-equipped soldiers from the Republican Guard formerly loyal to the slain Saleh and now commanded by his nephew Tariq. The bulk of the force (about fifteen thousand soldiers), consists of three or six Al-Malikah (“Giant”) Brigades, consisting of former Yemeni army soldiers organized by the UAE.

The UAE is contributing between one and two thousand soldiers to the offensive, backed up by AH-64 Apache attack helicopters and F-16E Desert Falcon jets flying from bases in Eritrea. Heavier Saudi Arabian F-15SA Strike Eagles are also dropping much of the ordinance, and Sudan is also contributing ground troops to the operation. France is reportedly considering dispatching minesweepers to help clear the port of mines left by the Houthis.

In the opening days of the attack, thirty air strikes struck the Hudaydah sector, while Apache helicopters exchanged fire with rooftop snipers. While ground forces advanced from the south, an amphibious flotilla approached the port from the north. However, a UAE landing craft was struck by a Houthi anti-ship missile twenty-four miles off the coast and set ablaze, killing four. The naval force withdrew, and the UAE later claimed it had been feint to divert Houthi forces.

The offensive appeared to bog down in heavy fighting for the Hudayah International Airport, with the UAE first announcing it had captured the airport on January 15, then two days later claimed it would “soon capture” the airport. From fragmentary reports, it seems the government forces seized the airport gate, overlooked forlornly by a lone MiG-21 jet on a pedestal, but had not secured the two mile-long runway, and instead attempted to bombard their opponents from a distance with mortar fire.

However, the coalition’s supply lines run through a slender strip of coastal land which is exposed to Houthi raids and ambushes. On June 16, the rebels released a video showing an ambush in which anti-tank missiles and trunk-mounted automatic cannons blast a UAE convoy. Mine-resistant armored vehicles can be seen racing through the kill zone as shells ricochet off them, while a fuel truck is set ablaze.

However, UAE medical officials told the Washington Post that 95 percent of the casualties had been caused by mines and IEDs liberally sown by the Houthis. The rebels also tried launching a ballistic missile at Jizan, Saudi Arabia, and deploying a bomb-laden Houthi drone of reportedly Iranian manufacture, but both were shot down.

Estimated casualties on all sides range from 140 to 300 from independent sources, with heavier casualties suffered by the Houthis. More than twenty-thousand civilian have reportedly fled their homes, with many more afraid to leave their homes in Hudaydah and running on short on. However, there are no clear reports so far of large-scale civilian casualties—something likely to change if fighting expands into the city itself.

On June 17, UAE forces launched a flanking attack to the northeast aimed at the Matahan roundabout. Two days later, pro-government forces finally seized control of Hudaydah International Airport. These coalition forces will likely continue to advance towards the port facilities to the northwest as well as attempt to secure the highway leading to Sana’a to the northeast.