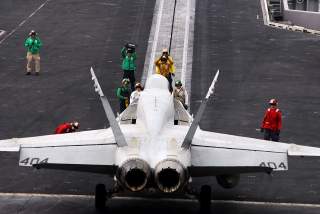 A debate over the future of US naval fighter jets has been on a slow burn for months, but it’s starting to heat up. There are reports that Boeing is surreptitiously marketing the F/A-18XT or ‘Block III Super Hornet’ to decision-makers in Washington via a one-page ‘white paper’. The chain of events stretches back to at least December, when Donald Trump announced to the Twitterverse that he’d ‘asked Boeing to price-out a comparable F-18 Super Hornet’ as an alternative to the F-35. (Though Boeing has had plans for a further evolution of the Super Hornet for several years.)

The notion of a Super Hornet alternative to the F-35 Alpha or Bravo models for the Air Force and marines respectively was promptly (and rightly) squashed, but Defense Secretary Mattis ordered a review of current plans for acquiring the F-35C carrier variant. The Pentagon’s thinking about how much they’re willing to pay for the extra capabilities afforded by the F-35C, and how many aircraft they need for the kinds of missions only an F-35 can do.

I can’t find the white paper online (and it apparently doesn’t have ‘Boeing’ branding), but as reported, it suggests the USN could save US$8b in procurement costs by reducing the number of F-35Cs and making up the numbers with Block III Super Hornets. Based on their cost estimates—US$79m for an XT or US$120m for an F-35C—that works out to a reduction from 340 to fewer than 150 F-35Cs.

It’s worth noting that even the most ambitious plans for the F-35C don’t include replacing all the Navy’s fighters. Each carrier air wing (CVW—of which there are ten) optimally includes four tactical fighter squadrons; currently one squadron of legacy Hornets and three of Super Hornets. The JSFs are initially intended to replace the legacy Hornets by 2028 and, under current plans, a second carrier squadron will be replaced with F-35Cs by 2033. The white paper appears to suggest capping F-35C numbers at just one squadron per CVW, plus spare and training aircraft, for a total of about 140 aircraft.

It’s not an altogether terrible idea. Cancelling the F-35C completely—which has been mooted from time to time—makes little sense. For air strikes on terrorists in Iraq/Syria, older platforms are more than sufficient. But in a high end war, the F-35’s stealth and situational awareness could make it an invaluable addition to the CVW—especially in the first days of the war.  And, despite President Trump’s comments to the contrary, making an aircraft stealthy isn’t as simple as ‘[putting] a stealth component onto it.’

The F/A-18XT looks essentially the same as the Advanced Super Hornet demonstrator tested in 2013. It features conformal fuel tanks, improved sensors, new cockpit avionics and compatibility with the EA-18G Growler’s jamming pods. But the XT appears to exclude the earlier demonstrator’s ‘stealthy’ enclosed weapons pod. Being based on a well-established design, it’d likely be less expensive than the F-35C.

The latest low-rate F-35 production contract (LRIP-10) includes two F-35Cs at a flyaway cost of US$121.8m each. The number of F-35Cs produced has been the lowest of the three variants, with just 47 aircraft ordered so far, including LRIP-10. As numbers ramp up it’s likely that the cost will continue to come down. Historical Super Hornet and Growler deliveries have had a flyaway cost of about US$70m each, but that’s based on high production rates. The F/A-18XT will be more expensive (additional capability always is), but by how much is unclear.

If Boeing can deliver the F/A-18XT at US$80m (which remains to be seen) and the F-35C price drops to US$100m (ambitious, but possible), the USN will have to decide if the F-35C’s capability is worth the extra US$20m unit price. They might well decide that it is, but that conclusion would be shakier if the cost difference is closer to US$40m—and that’s the thrust of Boeing’s case.

The F-35’s operating costs will be higher than the Super Hornet’s, due in part to its special stealth coating, but also its generally greater complexity. The white paper claims that the USN could save up to US$1.4b in annual operating costs by reducing the number of F-35Cs in favour of new Super Hornets.

The white paper argues that total savings over 20 years could be as much as US$30b, freeing up finances for other important projects, like unmanned strike platforms. Or the USN could simply invest in even more Super Hornets. They can’t fit many more aircraft on a carrier deck, but if a real war breaks out, losses will need to be replaced.

It’s clear that the Super Hornet can’t compete with the F-35A, which could cost less than US$85m each by 2020. And the F-35B’s STOVL capabilities can’t be matched by any other aircraft in production. But perhaps it’s not so surprising to see JSF program critics and budget hawks in Washington eagerly circling the carrier variant.