A Battle for the Soul of the American Military 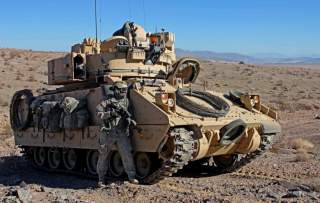 Carly Fiorina, the former CEO of Hewlett Packard, who is now running for president, wants a bigger Army, a bigger Navy, and a bigger Marine Corps: 50 brigades, 300 to 350 ships, and 36 battalions. How would she pay for it? The debate at which she asserted those numbers provided little time for detail. Earlier, though, she had offered at least that she wouldn't replace thousands of retiring federal workers, in order to decrease “the weight, the power, the cost, the complexity, the ineptitude, and the corruption of the government.” In contrast, at the Common Defense (COMDEF) forum at the National Press Club earlier this month, former Pentagon Comptroller Bob Hale repeated his oft-heard plea that federal workers get greater respect. Fiorina’s words weren’t likely what Hale had in mind, but he did agree that there should be fewer federal workers—just better ones. Much of the problem lies in finding them the right work to do.

This past Thursday at the Atlantic Council, Jamie Morin, director of the Pentagon’s Cost Analysis and Program Evaluation (CAPE) office, spoke on "Now How Much is Enough? The Contemporary Challenge of Cost and Program Analysis at the Pentagon”. The title was a conscious allusion to the famous book by Alain Enthoven and K. Wayne Smith of RAND; Enthoven served in the 1960s as the Pentagon’s first chief cost analyst. Back then was the heyday of systems analysis, when McNamara’s green-eyeshade Whiz Kids clashed with World War-veteran generals over how much of what to pile into the armed forces. The tension has persisted to this day, but despite the adversarial reputation and grudging respect Morin's office has garnered over the years, it’s still not firmly in charge, or able to analyze every dark corner of military spending.

In his talk, Morin's greatest wonkish enthusiasm was reserved for new trends in cost data file formats. (Seriously.) The Defense Department, he said, is “a generation behind industry” in automating business operations, but recently, at least in its supplier relationship management, modernity has been dawning. In the Joint Strike Fighter program, Lockheed Martin has been sending the Defense Department flex-file data dumps directly from its enterprise resource planning system, at once “giving [the government] dramatically more insight, and reducing the administrative burden on [the company] to compile and present the information in a traditional, legacy way.” One still needs the expensive labor of cost accountants to interpret it, but less of the expensive labor of auditors to fill out the forms. In short, bean-counting is requiring fewer bean-counters.

Trade unionists don’t like to hear it, but much of economic progress requires head-cutting—actually, a lot of it. This is entirely why Meg Whitman, the current CEO of Hewlett Packard, who is not running for president, plans to dismiss 33,300 staff over the next three years. The heads are mostly coming from the old Electronic Data Systems (EDS), acquired under CEO Mark Hurd in 2008 (see Robert McMillan, "H-P’s Job Cuts Reflect EDS Legacy,” Wall Street Journal, 16 September 2015). Why is this necessary? Two words: The Cloud. Cloud computing does not require legions of contractors to install and customize software at individual corporate data centers. The Cloud automates many of these functions, consolidating and standardizing business operations at offsite server farms. The Cloud scales flexibly when scale is needed. Amazon and Microsoft and others have been doing great business in this realm; HP, perhaps for its heritage, not so much.

For decades now, the trends have been alarming. By the analysis of the Defense Business Board, from fiscal year 1985 through 2000, American military spending fell 24 percent overall, but produced a military with 33 percent fewer troops and 48 percent fewer front-line units. Part of the problem is that the troops have gotten a lot more expensive, as the Congress has continued awarding them annual pay-raises and more costly free health care. In the process, one might say, the Pentagon has effectively replaced the all-volunteer military with an all-professional military. Most people joining the military today are at least thinking of making it a career, and that is very good for the development of human capital and organizational capability. The bigger problem lies in finding them the right roles over those careers.

Ponder for a moment the institutional overhead of the US Defense Department. The Office of the Secretary of Defense alone has 4,600 people, who collectively cost about $2 billion annually. The Joint Staff has another 4,600 people, at a similar cost. All the joint headquarters together have about 93,000 people, and the service-specific headquarters another 157,000. The average grade in all these operations is O-5.5, so the cost of a headquarters person is about three times that of one on the front line. As one strategist on the Army Staff confided to me, “we could do better work with one-quarter the people.” All that makes for some very expensive PowerPoint.

In contrast, in October 2013, after some protests and lawsuits, the Central Intelligence Agency hired Amazon Cloud Services to manage much of its digital information centrally, albeit onsite. The CIA’s CIO called the contract a "tremendous opportunity to sharpen our focus and to be very efficient” (see Frank Konnell, “The Details About the CIA's Deal With Amazon,” The Atlantic, July 2014.) John Pirc, CTO of NSS Labs, described the scalability of the solution as allowing American Intelligence “to spin up servers and add more [computing power] fast, and when you’re computing intelligence data, the more compute power you have, the faster you can react.” In the military as well, faster reaction is better; hiring out to the specialists means substituting cost-effective just-in-time for more costly just-in-case. Cloud computing is no panacea for bureaucratic sclerosis, but it’s a leading example of how modern management tools can streamline business operations in the military.

During his talk at the Council, Morin noted that his staff is working to figure out how to meet the Defense Department’s current target of reducing headquarters staff by 20 percent. That’s a good start, but he and his accountants should really be unleashed to go much further. Making half of those quarter-million headquarters people frontsoldaten would provide enough troops to build to a Fiorina force structure. Whether all that structure is necessary is a grand political question, but how the Pentagon moves its paper is a tractable business question that gets too little attention. Even better, over the long haul, where people sit on the organizational charts often affects where they stand on the issues. Shifting the balance of senior staff from high headquarters to operating units could improve the field’s voice in decision-making, so that next time, they go to war with the military they want, and not just the military they have.