Battle of Tsushima: When Japan and Russia's Most Fearsome Battleships Squared Off 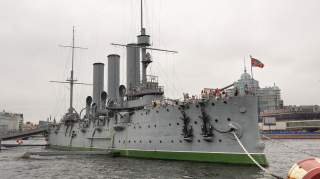 In late May 2017, it will be 112 years since the Imperial Japanese Navy’s catastrophic defeat of the Imperial Russian Navy during the Battle of Tsushima.

The clash in question was a result of the Russo-Japanese War of 1904 and 1905 — a conflict provoked by the Russian search for a warm-water port on the Pacific Ocean. The major Russian port in the Pacific, Vladivostok, was operational only during the summer. Port Arthur — nowadays Dalian, a naval base leased from China — was operational all the year.

Before that war, Russia pursued an expansionist policy in the Far East. As one of the major European powers, Russia was in a position to dictate developments in multiple spots around the world. Japan, on the contrary, was an unknown Asian country at the end of the world — and was seriously concerned about Russian encroachment of its sphere of influence in Korea.

Tokyo made an offer. It would recognize Russian dominance in northern China in exchange for Russian recognition of Japanese dominance over Korea. Moscow flatly refused and demanded Korea north of the 39th parallel to act as a neutral buffer.

The Japanese understood this as a prelude to war, and on the night of Feb. 8, 1904, their fleet under Adm. Togo Heihachiro launched a surprise attack on Port Arthur. Deploying torpedo boats, the Japanese heavily damaged two battleships of the Russian Far East Fleet — Tsesarevich and Retvizan — plus a cruiser.

The Russian fleet remained inside its port, well-protected by shore batteries — and this limited further damage. Left without a choice, the Japanese settled for a lengthy siege.

On the land, their army launched a campaign of assaults over the fortified hilltops overlooking the harbor. At sea, their attempts to block the port proved ineffective, but Japanese mines sank two Russian battleships that attempted to slip out on April 12, 1904. Petropavlovsk went down so quickly that she took with her the commander of the Russian Eastern Fleet, Adm. Stepan Osipovich Makarov.

The Russians avenged this loss in style. They laid their own minefield and lured two Japanese battleships into it. Both of these sank, too. However, a breakout attempt by the Russian naval squadron failed on June 23, 1904. By the end of the month, Japanese artillery was shelling the harbor.

As the situation continued to worsen, the Russian Eastern Fleet sailed into the Yellow Sea on the morning of Aug. 10, 1904. Togo quickly gathered his fleet and engaged the Russians in battle. Following an hours-long exchange of fire, the opposing warships closed the range down to fewer than four miles.

The Russian flagship received a hit that knocked it out of action. Amid the confusion, Prince Pavel Ukhtomsky saved the situation by charging his battleship Peresvet directly into the Togo’s battle line. To his luck, the Japanese were short on shells. Firing a final salvo, they crippled Peresvet but then withdrew. The clash thus ended inconclusively, although the Russian fleet had to withdraw to Port Arthur.

With the dignity of the Russian Empire at stake, Tsar Nicholas II ordered his Baltic Fleet under Adm. Zinovy Rozhestvensky to sail halfway around the world from the Baltic Sea to the Pacific and reinforce the Far East Fleet. After a false start caused by engine problems and other mishaps, this finally departed on Oct. 15, 1904.

Seven months later, on the evening of May 26, 1905, Rozhestvensky’s fleet — now designated the Second Pacific Squadron, and including eight battleships and 30 other warships — was on the last leg of its journey to Vladivostok.

In addition to numerous and significant deficiencies in their equipment and training, most of the Russian warships were in relatively poor condition. The long voyage, combined with lack of maintenance, meant they were heavily fouled and thus significantly slower than the Japanese ships were.

This was certainly an additional reason for Rozhestvensky to take the shortest route and direct his ships into the Tsushima Strait between the Japanese island of Kyushu and the Korean Peninsula.

Advancing by night through thick fog, the Russian fleet had a chance to slip through. However, around 2:45 in the morning, local time, a Japanese auxiliary cruiser detected the enemy and — using the then most modern technology, wireless telegraphy — aired a warning. By 5:00 in the morning, the whole Imperial Japanese Navy knew that the Second Pacific Squadron was around.

Wasting no time, Togo sailed into the battle and skillfully maneuvered his fleet so as to cross the Russian T. This enabled his ships to fire broadsides, while the Russians could only reply with their forward turrets. Soon after the battle commenced, superior Japanese gunnery took its toll. Most of the Russian battleships were crippled.

The first to go down was the battleship Oslyabya. Plastered by hundreds of hits, she sank around 90 minutes into the battle. Three hours later, a direct hit from the Japanese battleship Fuji caused the Russian battleship Borodino to explode. She went down with all hands.

Rozestvensky was meanwhile knocked out of action by a shell splinter, and Nebogatov took over command, but could do very little as Togo maneuvered his fleet into another crossing of the Russian T. By evening, the battleships Knyaz Suvorov and Imperator Aleksandr III were also lost. The Japanese suffered only light damage.

The night brought no respite, as Togo unleashed 37 destroyers and torpedo boats. Continuing their attacks for three hours without a break, the aggressive Japanese threw the Russians into complete confusion. Amid numerous collisions, their fleet dispersed into several groups, each of which attempted to continue northward on its own.

The battleship Navarin then struck a mine and was compelled to stop. Swarmed by the Japanese, she was sunk by four torpedoes. Only three from the crew of 622 survived. The battleship Sissoi Veliky was badly damaged by a torpedo hit and had to be scuttled the next day, as did two old armored cruisers. In return, the Japanese lost three torpedo boats.

At 9:30 in the morning on May 28, whatever was left of the Russian fleet was still heading north when the main body of Togo’s fleet surrounded the squadron of four battleships led by Nebogatov. Realizing he was outgunned, the Russian ordered his ships to surrender. In Japanese code books there was no signal for “surrender,” and thus they continued firing.

Nebogatov then ordered white table cloths sent up the mastheads. Having had a Chinese warship escape him during the Sino-Japanese War of 1894, Togo didn’t trust the Russians — and continued to fire. Desperate, Nebogatov ordered his ships to raise the Imperial Japanese Navy flag and stop all engines. Only then, at 10:53 in the morning, did Togo order a cease-fire and accept the Russian surrender.

By that point in time, the Russians had lost eight battleships sunk or scuttled, and four forced to surrender. Also sunk were four of their eight cruisers and six of nine destroyers. They suffered a loss of 4,380 killed and 5,917 captured, plus a further 1,862 interned. Just one Russian cruiser and two destroyers reached Vladivostok. The Japanese lost three torpedo boats, 117 killed and around 500 wounded.

The Battle of Tsushima not only ended the Russo-Japanese War in Japan’s favor, overnight it catapulted Japan to a position rivaling the Western superpowers.