Who Is to Blame for the Doomed Iraqi Uprisings of 1991? 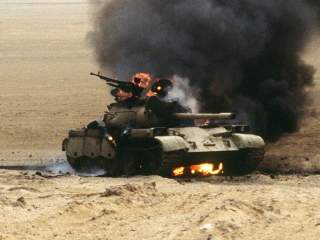 On February 15, 1991, four weeks into Operation Desert Storm, President George H.W. Bush, using identical language twice—at the White House and later at a Raytheon defense plant in Massachusetts—encouraged “the Iraqi military and the Iraqi people to take matters into their own hands and force Saddam Hussein, the dictator, to step aside.” Bush’s message was beamed into Iraq via every international television and radio channel, while coalition aircraft dropped leaflets calling on Iraqi soldiers and civilians to “fill the streets and alleys and bring down Saddam Hussein and his aides.” Kurdish rebels in the north and the Shias in the south began building upon years of clandestine planning to topple Hussein.

On February 28, Bush declared a ceasefire just one hundred hours after the ground campaign component of the war had commenced; and the following day, Iraq exploded in rebellion. Beginning in Basra and spreading throughout Najaf, Karbala, and Nasiriyya, Shia rebels and Iraqi Army sympathizers attacked government security agents and regime targets. On March 5, Kurdish rebels revolted against Iraqi Army divisions and Baath Party officials, detaining who they could and massacring resisters. One month after Bush’s call to the Iraqi people to rise up, fourteen of Iraq’s eighteen provinces were surprisingly no longer under the control of the central government.

On March 3, 1991, commander of UN coalition forces, Gen. Norman Schwarzkopf, met with Hussein’s generals at the Safwan Airfield in Iraq to discuss the terms of the ceasefire, focusing on the lines of demarcation between opposing forces, the mechanisms for exchanging prisoners of war, and an order by Schwarzkopf that Iraq not fly fixed-wing aircraft. During the discussion, an Iraqi general asked Schwarzkopf for permission to fly helicopters, including armed gunships, to transport government officials over the country’s destroyed roads and bridges. Believing it a legitimate request, and acting without Pentagon or White House instructions, Schwarzkopf replied, “I will instruct the Air Force not to shoot at any helicopters flying over the territory of Iraq where our troops are not located.” The memoir, coauthored by Bush and his national security advisor, Brent Scowcroft, succinctly summarized what happened next: “Saddam almost immediately began using the helicopters as gunships to put down the uprisings.”

The Iraq Air Force fixed-wing aircraft, however, were never employed to defeat the Kurd or Shia uprisings, as U.S. military officials refused to allow the planes to even be “repositioned” within the country because they might attack coalition forces. On one of the few occasions that an Iraqi aircraft violated Schwarzkopf’s edict—a SU-22 Fitter flying out of Kirkuk to avoid the Kurds, not attack them—it was shot down by an American F-15C. The U.S. military’s demonstrated readiness to shoot down violators of this as-yet-undefined “no-fly zone,” and the general unwillingness of the Iraqis to test Schwarzkopf’s order, suggests that a similar pronouncement may have deterred Iraq from using helicopters as a counterinsurgency tool. While patrolling southern Iraq, U.S. F-15s watched Iraqi helicopters attack Shia insurgents; using the fighter aircraft to down the helicopters would have been a simple and straightforward mission.

In the end, Saddam Hussein’s regime, using only helicopters, long-range artillery, and armored ground forces, brutally counterattacked the uprising, killing 30,000-60,000 Shias in the south, and some 20,000 Kurds in the north. Though the United States had enormous military capabilities in the Persian Gulf, the Bush administration provided no assistance to the uprisings, fearing, variously, the “Lebanonization of Iraq,” Iranian-backed Shias assuming power in Baghdad and more U.S. soldiers dying in “another Vietnam,” as then-Secretary of State James Baker described it. The Bush administration also actively restrained the uprisings by refusing to provide captured Iraqi weapons or munitions stockpiles to the insurgents, but rather chose to destroy them, return them to the Iraqis, or transfer them to the Mujahideen in Afghanistan. By early April 1991, Hussein’s regime had completely crushed both Shia and Kurdish resistances. By mid-April, American, British, and French planes began enforcing a comprehensive no-fly-zone above the 36th parallel in northern Iraq, which they would sustain for the next dozen years.

Micah Zenko is a senior fellow at the Council on Foreign Relations. This piece was adapted from his book, Between Threats and War: Discrete Military Operation in the Post-Cold War World (Stanford, CA: Stanford University Press, 2010). This article first appeared in Politics, Power, and Preventive Action.