Beware ISIS: The 2002 Iraq AUMF Is Alive and Well 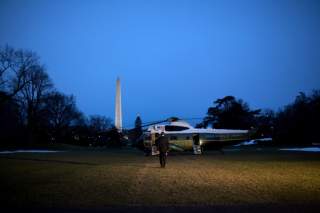 With four divisions of the Iraqi army folding in the northern Iraqi city of Mosul without a fight, Prime Minister Nouri al-Maliki calling on Iraqis to arm themselves, and the Islamic State of Iraq and the Levant sweeping southwards towards Baghdad, President Barack Obama finds himself with yet another unfortunate turn of events for his foreign policy portfolio.  Judging by the utter veracity and effectiveness of ISIS’s military advances in northern and western Iraq over the past week, the American people are once again forced to look at a conflict that many would prefer to move past.

While the collapse of Iraqi security forces and the capture of Mosul and Tikrit by ISIS fighters caught nearly everyone in the United States Government by surprise, Iraq’s security has been going downhill for some time.  Last year was the deadliest period for Iraqi civilians since 2007, when the Sunni and Shia militias were finally starting to lose steam.  Since January of this year, civilians have been massacred in overwhelming numbers, particularly in Baghdad, and Iraqi security forces have been unable to stop it.  A porous and largely irrelevant Iraqi-Syrian border, and the prevalence of jihadist organizations in northern and eastern Syria have not helped either.  As of this writing, Iraq Body Count—a database that has been tracking civilian casualties in the country since the U.S. invasion in 2003—records 742 Iraqi deaths this June, and we aren’t even halfway through the month.

The situation has deteriorated to the point of getting President Obama’s firm and public attention.  Obama, the same candidate who successfully ran his first presidential campaign on his opposition to the 2003 Iraq invasion, was forced to give a statement to reporters about Iraq’s downward spiral:

“Over the last several days, we've seen significant gains made by ISIL, a terrorist organization that operates in both Iraq and in Syria. In the face of a terrorist offensive, Iraqi security forces have proven unable to defend a number of cities, which has allowed the terrorists to overrun a part of Iraq's territory. And this poses a danger to Iraq and its people, and given the nature of these terrorists, it could pose a threat eventually to American interests as well.”

Obama went on to say that U.S. military action, most likely through air operations, are a real possibility if and when Iraqi political leaders, including Prime Minister Maliki, get their act together politically.  “We will consult closely with Congress,” the president said, “as we make determinations about appropriate action.”

Yet in the event that President Obama ultimately decides to employ U.S. military force in order to save Baghdad from witnessing a second sectarian civil war, he won’t need to ask the permission of Congress.

Coordinating closely with lawmakers on any issue, particularly the use of military force, is always a good judgment to make politically (one hopes the White House learned its lesson after the Bergdahl-Taliban swap), and Obama will likely send out his deputies to brief senators and congressmen on the administration’s internal thinking, regardless of the decision he makes.

Fortunately for the White House, consulting with Congress is the only thing that they would have to do.  Unlike last September, when the administration tried and failed to convince Congress to approve an authorization for the use of force against regime targets in Syria, the White House can conclude its decision-making process without having to testify in front of a list of congressional committees.  In sum: the White house has more than enough statutory authority (excluding Article 2 under the U.S. Constitution) to engage in military action over Iraqi soil.

As much as President Obama likes to remind Americans that he ended the country’s war in Iraq (that “dumb war,” as Obama infamously put it), he may ironically have to rely upon the very congressional authorization that he so adamantly opposed as a state senator in Illinois: the Authorization for the Use of Military Force Against Iraq of 2002.  Under this AUMF, Congress granted the President of the United States the power to use the U.S. Armed Forces for the purpose of defending “the national security of the United States against the continuing threat posed by Iraq.”  After taking a legally constructionist interpretation of the 2002 AUMF, one can come to the conclusion that Iraq does indeed continue to pose a continuing national security threat to the United States due to ISIS activity.

Despite attempts by senators from both parties to repeal the 2002 AUMF, including one effort by Republican Senator Rand Paul and another attempt led by Democratic Senator Robert Menendez, the authorization is still on the books and can presumably be used by administration lawyers as a legal rationale for U.S. airstrikes.

Dr. Jack Goldsmith, a former Assistant Attorney General in the Office of Legal Council during the George W. Bush administration, agrees that President Obama has all of the authority he needs if he decides to take military action—however minimal—in Iraq.  The 2002 AUMF, Goldsmith writes, “gives the President the discretion to determine when the use of the U.S. Armed Forces is necessary and appropriate to defend U.S. national security against the continuing threat posed by Iraq (not the government of Iraq, not Saddam Hussein, but Iraq), and authorizes the President to use those forces in that circumstance.”

Whether or not President Obama would actually grab onto the 2002 AUMF is unlikely: his administration, after all, has publicly expressed its position that the authorization should be repealed.  Obama would also take a number of hits politically, including some from within his own party, if he decided to cite the Iraq AUMF as his sole and overarching legal justification (Republicans would call the president a hypocrite for using an authorization that he vocally opposed in 2002).

This, of course, is not the only statute that the White House could use to launch an air campaign to destroy ISIS positions.  The 2001 authorization of force against Al-Qaeda, which has been stretched repeatedly over the years, could be another option.  But relying on this AUMF would also present Obama with some political problems, given that he is on the record supporting ultimate repeal.

I wonder what President George W. Bush and his former lawyers are thinking right now?