Beware, Russia: The U.S. Military Is Conducting Some Big Wargames with Sweden 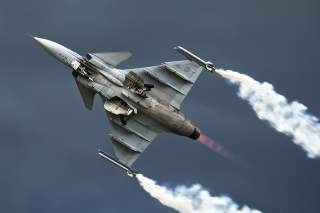 The wargames are the largest military maneuvers Sweden has undertaken in more than two decades. Some 19,000 Swedish military personnel from all service branches are participating in the exercise, as are people from 40 other Swedish government agencies.

In addition to Stockholm’s own forces, NATO members Denmark, Latvia, Estonia, Finland, France, Lithuania, Norway and the United States are also participating. The United States will deploy roughly 1,300 service members to Aurora-17, which runs from September 11 through September 29.

While Stockholm does not explicitly say it, the exercise is designed to deter any potential Russian adventurism in the region.

"Aurora is the largest exercise in 23 years, in which the army, air force and navy is participating in a joint exercise,” Swedish defense minister Peter Hultqvist said in a statement.

“The exercise sends an important signal about our security policy. It raises the deterrent threshold against different types of incidents and provides important data for evaluation of our military capabilities."

The key for Stockholm is to rebuild the readiness of its forces—particularly their ability to rapidly mobilize “in light of the deterioration of the security situation in Europe”—as the Swedish Defense Ministry put it. However, Stockholm does not intend to go to war alone and, thus, places a premium on coalition warfare.

“We place great value on the international cooperation that builds a security network in our part of Europe,” Hultqvist said.

“I look forward to personally visiting the exercise on four occasions and at all locations.”

The United States, for its part, considers Sweden to be a valuable partner for maintaining security in Europe. As such, the U.S. is deploying a fairly sizable contingent that includes advanced missile defense capabilities, helicopters, as well as Boeing P-8A Poseidon maritime patrol aircraft and the guided missile destroyer USS Oscar Austin (DDG 79).

“The interoperability and cooperation of Sweden and the United States

European Command, said in a statement.

“I look forward to continued future military exercises, like Aurora-17, in which we can all learn and share valuable information for the profession of arms.”

Meanwhile, despite the heavy involvement of NATO forces in Aurora-17, Stockholm is keen to emphasize that the alliance is not formally participating in the maneuvers. Sweden has traditionally maintained a policy of neutrality—though in recent years it has started tilting towards NATO as Russia has started to reassert itself in the region after its long post-Cold War malaise.

“NATO is not participating in the exercise, nor is it a NATO Exercise. Aurora 17 is a national exercise for the Swedish Armed Forces,” the Swedish Defense Ministry states.

“However, in order to have as good an exercise as possible, and at the same time exercise Sweden’s defense capability against a larger, sophisticated opponent, other countries have been invited to participate. Participation will be subject to bilateral agreements between Sweden and the participating nations.”

That larger and more sophisticated opponent is, of course, Russia. And Aurora-17 kicks into high gear just as the Russia and Belarus conclude their own Zapad-17 wargames.