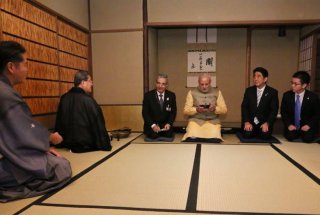 While their ambitions for their partnership may be global, it was their regional message that had the most profound implications.  At their meeting, Abe spoke of the “untapped potential of Asia’s two largest democracies,” while Modi referred to the “uncertainty ahead in Asia,” an uncertainty that brought with it even “greater responsibility for Japan and India.”

India and Japan have much to gain by deepening their economic ties. Modi’s interest in new and expanded Japanese investment in India was clear.  At a luncheon hosted by the Keidanren (Japan Business Federation), attended by 220 business leaders from both countries, Modi began his remarks (impressively, speaking in Japanese) by thanking Japan’s business leaders for their interest in his country, and promising that he would address their concerns over the labyrinth of regulatory barriers to Japanese direct investment.  Japanese interest in helping New Delhi improve its national infrastructure is high, including the potential for sales of Japan’s famed high-speed rail systems. The joint communiqué did not disappoint, either.  Abe promised five years of generous economic assistance to India’s economic transformation, with ODA and private capital totaling thirty-five trillion yen, or around $33.4 billion. Modi openly expressed particular interest in Japan’s clean energy technology.

On the security side of their agenda, the two leaders were clearly speaking from one script on their concerns over China’s growing maritime reach.  India and Japan both have territorial differences with China, and Chinese maritime influence in and around India, including Sri Lanka, is growing. Modi and Abe agreed to regular naval consultations between the Indian Navy and the Maritime Self Defense Force, as well as to consider how to expand their defense technology cooperation.  India has shown keen interest in Japanese seaplanes and other coastal defense systems.  For his part, Modi spoke also to one of Japan’s strategic concerns – access to rare earth materials, promising to help Tokyo diversify its supply. Going forward, the foreign and defense ministers of both nations will meet regularly to discuss how to expand their strategic cooperation.

Modi called his visit “a new start” for relations with Tokyo, and Abe was clearly happy to see India’s new prime minister explore the opportunities for deepening their ties. Modi had visited Japan twice before he was elected this spring, and both times met with Shinzo Abe. Abe has long taken a special interest in India, and was the chief guest of the Indian government at their Republic Day celebration last January. Modi’s election in May has brought even more energy to the relationship. As the television footage suggested, the two leaders seem to have a good chemistry, and enjoyed their time together. Modi even sent out messages of thanks to Abe via social media as he visited Kyoto and other spots in Japan.

Abe too must be satisfied to see one of his main diplomatic efforts take root. He has put considerable energy into developing new partners and opportunities for balancing China’s rise, and India has long been an option that Tokyo’s strategic thinkers have looked to develop. Since coming into office in late 2012, the prime minister has been energetically promoting Japan’s diplomacy, diversifying energy and economic ties, and personally tackling some of the thornier challenges, such as the territorial dispute with Russia and the fate of abducted citizens in North Korea. Events in Ukraine have complicated the former, and it is still far too early to tell what might come of the latter. The territorial dispute with Beijing has brought ties with China to a virtual standstill, and the estrangement with Seoul has been an unexpected setback.

Japan’s perspective on the geostrategic balance in Asia had already begun to change even before Abe returned to office in 2012, and the strategy of building new strategic partners in Asia hedges against increasing uncertainty in Asia’s future.

In his five-day visit this week, Narendra Modi has made Japan’s pivot to India even more enticing – and far more likely to succeed.

This post appears courtesy of CFR.org and Forbes Asia.