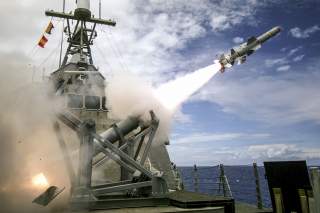 Boeing is pulling itself out of the competition for the Navy’s new over-the-horizon (OTH) missile slated for the service’s littoral combat ships (LCS) and future frigates (FF), industry developers said.

“Boeing will not submit a bid to the U.S. Navy’s over-the-horizon weapon system request for proposal, as the solicitation excludes existing and future capabilities Boeing can offer,” Troy Rutherford, company missile systems director said. “We will continue to advance and support Boeing missile technologies in partnership with the Navy to stay ahead of complex maritime threats.”

Rivals Lockheed Martin and Raytheon appear to still in the mix for the new missile, at least for now.

While it is not yet clear, given ongoing discussion about changing requirements for the Navy's over-the-horizon missile (OTH), if Lockheed's high-tech Long-Range Anti-Ship Missile (LRASM) will wind up functioning as that particular weapon.

The Navy is now examining a range of options for LCS-Frigate OTH missiles. Multiple reports say the Navy may now be looking at different cost and production issues for the OTH missile competition.

“We share the concern that the OTH-WS solicitation has substantially departed from these requirements and indicates that the USN (Navy) may not leverage its investments in current programs of record.  Nonetheless we are working to determine if a LRASM based offering is appropriate for this competition," Callaway said.

“Raytheon and Kongsberg are jointly preparing a submission for the U.S. Navy’s Request for Proposal for its Over-The-Horizon Weapon System,” Raytheon conformed in a statement that same day. “The companies believe that the ready-now Naval Strike Missile offers the U.S. Navy a high-performance capability to rapidly and affordably deliver strike dominance to the U.S. surface force.”

But Boeing’s forfeit comes as a surprise to many, who felt the company’s upgraded version of the Harpoon -- a missile that already has been deployed on an LCS – was the likely leading contender to win the competition.

But in a private interview with Scout Warrior, Rutherford said the Navy’s shipboard OTH weapons would lack significant upgraded Harpoon capability Boeing is already developing for the service’s aircraft.

The company would have to develop and build lesser missiles for the ships than it was for the aircraft, which, Rutherford said, would cut some operational attributes – and main Boeing selling points – of the more sophisticated Harpoons.

It also seemed, he said, that the requirements were “a moving target” as the companies sought clarifications from the Navy.

“This decision doesn’t come easy,” he said. But it didn’t make a lot of sense for us to continue with the bid,”

Other industry officials familiar with the competition, who asked not to be named, have said it appeared the Navy was more interested in missile range and cost than in the weapon’s lethality and survivability.

The bids are now due June 23, industry and Navy officials note. There was no Navy official response to Boeing’s decision to withdraw.