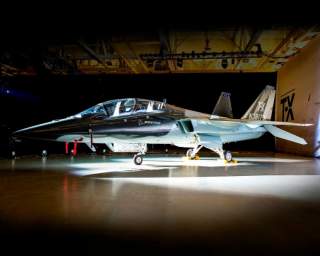 The Boeing Company today unveiled its entry in the Air Force's T-X program that will acquire at least 350 planes for training the service's future fighter and bomber pilots.  Boeing's offering is not like the trainers being proposed by three other teams.  For starters, it has twin tails that are angled like those of a fifth-generation fighter, rather than the single vertical tail featured on the other entries.  It isn't stealthy, but when you view it head-on, it looks remarkably similar to the profile of planes that are -- most notably the Air Force's F-22 and F-35A fighters.

This is not an accident.  In addition to the superior flight control and safer aerial refueling that twin tails deliver, Boeing insiders say their trainer was purpose-built with the instruction of airmen who are going to pilot fifth-gen aircraft in mind.  Introducing low-observable technology into the design of a trainer where it wasn't required would not have made sense -- affordability is crucial -- but Boeing engineers clearly were intent on producing an airframe that mimics as closely as possible the feel and features of cutting-edge combat planes.

Company executives are enthused that industry was given early insight into the performance requirements for the new trainer, because they say that enabled them to invest their money in a clean-sheet design that was a perfect match for what the Air Force wants -- at an affordable price.  The way they figure it, two of the competing entries can't match the fidelity of Boeing's design to Air Force needs because they are adaptations of existing planes, while the third -- incumbent Northrop Grumman's offering -- looks too much like the 50-year-old plane it will replace.

You might not think a company that delivers hundreds of commercial jetliners and scores of high-end military aircraft every year would view a program to produce 350 trainers as a top priority.  It does though, for two reasons.  First, Boeing lost competitions to build the tri-service F-35 fighter and B-21 bomber, and the top-of-the-line F-22 fighter on which it was a partner was prematurely terminated.  So its military-aircraft engineers need the work.  Second, demand for jetliners is cooling, which means the military side of the house will have to generate more revenues.

Beyond that, Boeing sees that the Air Force's stated objective to acquire six developmental trainers and 346 production trainers is just the beginning.  The program will also need state-of-the-art simulation and training devices on the ground, it will need maintenance and modifications as threats evolve, and if it is successful then other countries will want to buy in.  That's what happened with the legacy T-38 trainer, still used by countries like Germany and Turkey in the instruction of their young pilots.  Over a thousand T-38s have been built since the late 1950s.

What Boeing also sees is that the Air Force can't put off developing a new trainer any longer, because the 500 or so T-38s still in its training fleet are really old, averaging over 40 years of age.  That isn't just a safety and upkeep problem: Eisenhower-era airframes aren't well-suited to preparing pilots for the operation of stealthy, networked, digitized combat aircraft.  The service needs a trainer that can get pilots ready for the rigors of modern warfare, not the Cold War world in which the T-38 was conceived.

So to quote the backgrounder Boeing provided at the September 13 rollout, its solution delivers "real-as-it-gets training" both in the air and on the ground, a fusion of advanced information and aerospace technology emphasizing safety, versatility, low cost and fidelity to operational realities.  The cockpit layout will be "clean, intuitive and reconfigurable;" the on-board equipment will be easily accessible to maintainers; and the performance of the airframe, powered by a single General Electric 404 engine, will be superior in all flight regimes.

The credibility of these claims resides in the fact that Boeing played a central role in building all of the bombers and top-of-the-line fighters that the Air Force operates today -- not to mention its newest strategic airlifter and most of its manned sensor aircraft.  In addition, the company's commercial side has pioneered manufacturing techniques aimed at greatly reducing the cost of integrating modern aircraft.  The Air Force has made affordability a top priority in all new acquisitions as part of its crusade to "bend the cost curve" driving up prices.

Boeing stresses that the plane it rolled out Tuesday, which will fly later this year, is not a prototype.  The handout distributed at the event called it "the first production aircraft" Boeing has built in the trainer program with partner Saab (which contributed the aft section).  In other words, the design is not going to change.  The point here is that the Air Force doesn't need to buy something "old and stale" to minimize risk, it can have the latest technology in a mature configuration.  To underscore that point, Boeing has assembled not one but two "purpose-built" trainers.

Although they are still smarting from their bomber loss, Boeing executives freely admit that Air Force transparency up front about requirements was crucial in enabling them to optimize their offering for the trainer program.  Because industry was allowed to play early-on in shaping program plans, the requirements likely to be included in the final solicitation will reflect a realistic tradeoff of capabilities and costs so that the effort stays on track.  When that final solicitation hits the street in December, Boeing folks say they will be ready.