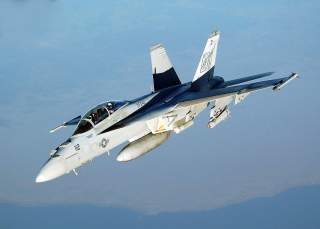 Unlike previous iterations of the Advanced Super Hornet—which Boeing was positioning to compete head-to-head with the stealthy single engine F-35—this version is a more modest effort designed to work with the Joint Strike Fighter and the Naval Integrated Fire Control Counter Air (NIFC-CA) network.

“We’ve been working with the Navy over the last year—year-and-a-half—to understand what does the carrier air wing need from a complementary perspective with the F-35, with the [EA-18G] Growler, E-2D and Block III is that” Dan Gillian, Boeing’s F/A-18E/F program manager told The National Interest at the Navy League’s Sea Air and Space conference. “Block III is that complementary asset.”

Compared to the 2013 version of the jet, Boeing is placing less emphasis on stealth, but the aircraft does retain some of the older concepts low observable enhancements, Gillian said. “That’s not what the future fight is about,” Gillian said. “The threat has migrated all over the place. Enough stealth is important but you don’t need it all the time all the stealth you could possibly get.”

The major features that the new version retain from the 2013 concept are conformal fuel tanks. The new conformal fuel tanks add 3,500lbs of fuel to the jet and extend the aircraft’s range by nautical miles. “The conformal tanks are important since to need to get weapons out at range,” Gillian said.

Perhaps the most important upgrade is long-range IRST system—which is designed to be a counter-stealth sensor, Gillian said. the Navy considers to essential to countering new enemy stealth aircraft such as the Chinese J-20 and Russian PAK-FA. Gillian that Boeing and Navy solved many of the traditional issues associated with infrared sensors—but didn’t go into detail. Company officials have previously said the new IRST is able to derive accurate range data—enough to cue weapons.

Gillian said that all of the new Block III aircraft Boeing delivers to the Navy will have these enhanced features, however, they could be retrofitted to older aircraft during a mid-life upgrade. The Block III could enter production in the 2020s, but that package of systems could begin retro fits shortly after. “By doing both those things, you could bring the inventory levels of the Block III up much faster,” Gillian said.

The Navy has yet to decide how many Block III jets it will need, but the company can move relatively quickly in ramping up production. “We think we can get one squadron per carrier by the early to mid 20s,” Gillian said.