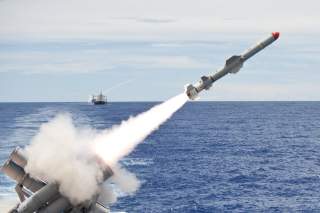 The United States Navy has completed its first operational test shot of a new variant of Boeing’s Harpoon Block II+ anti-ship missile over the Point Mugu Sea Test Range in California. According to the Naval Air Systems Command (NAVAIR), the Jan.22 test put the new System Configuration Set H12E through its paces.

“We are extremely proud to deliver precision targeting to the warfighter with a flexibility to stay ahead of threats,” Cmdr. Jon Schiffelbein, NAVAIR’s Harpoon Deputy Program Manager, said in a statement.

According to NAVAIR, the test shot demonstrated the new Harpoon variant’s ability to interface correctly with a new software upgrade for the Boeing F/A-18E/F Super Hornet. Like all combat aircraft, the Super Hornet has been upgraded continuously over the years with new hardware and software.

However, weapons too are continuously upgraded. With rising great power challengers—like Russia and China—to the United States deploying increasingly more capable warships, the Navy has had to modernize the long-serving Harpoon to keep pace.

Compared to the original version of the weapon, the Harpoon Block II+ offers greater reliability and survivability. It includes a new GPS guidance kit, a new data link interface that enables in-flight updates, improved target selectivity, an abort option and enhanced resistance to electronic countermeasures. Moreover, it can be launched from multiple air and surface platforms, according to NAVAIR.

“The Harpoon Block II+ expands on a legacy of over 40 years of service,” Capt. John Dougherty, NAVAIR’s Precision Strike Weapons program manager, said. “Using a proven product and expanding its capability ensures the Navy has a viable weapon that is lethal, flexible and accessible at a low cost to address the growing maritime threat.”

The Navy intends to deploy the new Harpoon this year to meet the rapidly evolving threat. As NAVAIR notes, this test marks of quickly fielded improvements as part of the Navy’s distributed lethality, which calls for the rapid weapon integration of weapons to offset gains by potential enemies.

The Harpoon Block II+ is just one weapon among a host of similar efforts. Others include grafting an anti-ship capability onto the Tomahawk cruise missile and Standard SM-6 anti-aircraft missile. The idea is to get the most bang for the buck out of the Navy’s existing arsenal—literally in this case.