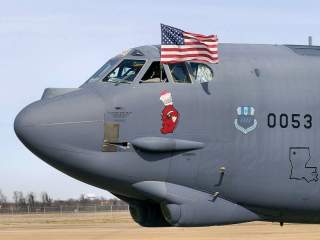 On April 18, the U.S. Air Force’s massive B-52 Stratofortresses launched their first strikes against the Islamic State. In the mission over Qayyarah, Iraq, the lumbering warplanes dropped GPS- or laser-guided bombs onto a nondescript set of buildings.

But despite being icons of American military power, the bombers might not be the best tools for the job. When Boeing delivered the last B-52s more than a half century ago, the flying branch expected the planes would obliterate sprawling Soviet military bases and cities with nuclear bombs — not carry out pinprick strikes on terrorists in the Middle East.

“I just feel this is [the] B-52 being shoehorned into current operations,” Brian Laslie, Air Force historian and author of The Air Force Way of War, wrote onTwitter on April 20. “I’m not saying B-52 is wrong platform. I’m just not convinced it is.”

To be sure, the Pentagon has played up the decision to send the eight-engine heavy bombers back to war. The deployment to Al Udeid Air Base in Qatar marked the first time the aircraft — informally nicknamed the Big Ugly Fat Fucker, or BUFF — had flown out of a base in the Middle East in more than 25 years.

In continuous service since 1955 and repeatedly upgraded, a single B-52 can lug 35 tons of bombs and missiles. While the plane can fly nearly 9,000 miles with a full load of fuel, aerial tankers can keep the BUFF airborne as long as the crew can hold out.

The bombers are “legendary,” U.S. Army Col. Steve Warren, the Pentagon’s top spokesman for America’s war on Islamic State, told reporters on April 20. “Obviously, the B-52 does have a long and very illustrious history. So we do like to talk about it.”

The planes replaced B-1 bombers that had been flying over Iraq and Syria since August 2014. According to the Air Force, these “Bones” had flown only seven percent of the missions by manned aircraft since the bombing campaign started, but had lobbed nearly 40 percent of the weapons.

“The B-52s really are replacing the B-1s,” Warren explained. “[The B-52s] will conduct the same type of precision strikes that we’ve seen for the last 20 months here in this theater.”

But none of this really explains whether sending the BUFFs — or the “Bones” beforehand— was a practical move in a fight against small groups of militants, with few heavy weapons, who favor civilian style vehicles for transportation.

“I’m never a fan of using a platform just to use it,” Laslie noted on Twitter. “Was B-52 only platform capable?”

When the BUFFs touched down in Qatar, the Air Force already had F-15E Strike Eagle and F-16C Viper fighter bombers, F-22 Raptor stealth fighters, A-10 Warthog ground attackers and drones in the region. The U.S. Navy and Marine Corps had F/A-18 Hornets and AV-8 Harrier jump jets flying from aircraft carriers and land bases. Coalition partners France and the United Kingdom added even more planes to the mix.

The vast majority of these planes can carry the same types of bombs the B-52 dumped on Qayyarah. Of course, the bombers can stay airborne longer and carry more weapons on each flight, potentially taking out more targets on each outing.

But that comes at a cost. The Air Force spends around $70,000 for every hour a B-52 is in the air. By comparison, the Bone costs the flying branch just over $61,000 per flying hour. At some $20,000 an hour, the smaller F-16s are significantly cheaper to put into combat. The venerable A-10 costs even less than that.

So for every hour of BUFF flight time, the Air Force could get three times as much out of its Vipers or Warthogs. In a video the Pentagon released of the strike at Qayyarah seen above, four or five individual bombs appear to rain down on different buildings in an Islamic State “weapons storage facility.”

We don’t know if the bomber went on to hit any other targets. But Air Force and Navy pictures routinely show their smaller jets carrying these many bombs — or more — on strikes in Iraq and Syria.

And the cost figures take into account the relative costs to repair and fuel up the various planes. Unlike many of the Pentagon’s smaller jets, which are still rolling off the assembly line in many cases, the aging B-52 can be logistically demanding.

When an A-10’s engine gave out over Iraq on April 9, 2015, the Warthog made an emergency landing at Al Asad Air Base. Five days later, a repair team — with the help of U.S. Marines at the base — had the jet ready to go again after installing an entirely new engine.

Unlike an A-10, replacing any one of a B-52’s eight engines costs $1.5 million and lot more effort, the Air Force explained in a 2013 news release. And compared to more modern power plants, Pratt and Whitney’s Cold War-era TF-33 turbofan is a noisy, dirty, inefficient gas-guzzler.

The BUFFs have encountered other problems after decades of use. In January 2014, a B-52H was totaled after old electrical systems caught fire in the cockpit. The Air Force decided it would be cheaper to pull another bomber out of the famous Boneyard at Davis-Monthan Air Force Base in Arizona than fix the burned out plane. The flying branch estimated it would cost some $13 million to put the previously retired “Ghost Rider” back into action.

Even upgrading the BUFFs to keep them up to date is becoming increasingly difficult, as the B-52’s existing spinning launchers inside their bays were built to only carry nuclear bombs and cruise missiles. To carry conventional ordnance, the bombers must use cumbersome racks and external pylons.

The Air Force has been testing a modification to allow the bombers to carry more and newer types of smart bombs and missiles with an internal rotary launcher. But in recent tests, Air Force weaponeers encountered problems getting the launchers to work with the necessary software. “Imagine if the avionics computer, which is required to operate the weapons system, shuts down just prior to a bomb run?” an official Air Force article asked.

Because this is exactly what happened. Technicians had to install multiple hardware and software fixes so the BUFF’s crew could “talk” to the its new internal weapon racks without crashing the whole system. With this Internal Weapons Bay Upgrade still in development, the bombers in Qatar are making do with the older setups.

All of this could help explain why the Air Force was initially reticent to send the bombers to the Middle East. In January, after the B-1s departed, the Air Force insisted it had no plans to deploy the BUFFs to fight Islamic State.

None of this is to say the B-52 isn’t still relevant or decidedly impressive, especially with the age of the basic design. The airframe is extremely durable and can keep flying through the mid-2040s. Instantly recognizable, the bombers have a psychological effect on enemy forces that many newer planes simply don’t possess.

Besides, new motors and other modifications could breath extra life and more efficiency into the old BUFFs. In February, the Pentagon announced it was looking into building an “arsenal plane” that could spit out dozens of long-range missiles or other weapons to get past ever improving surface to air missiles and air defense radars. Depending on the exact requirements, the B-52 could be a perfect platform for that plan.

With the help of new anti-ship missiles, the BUFFs could help offset the potential threat of hostile warships in the Persian Gulf or the South China Sea. Since at least April 2014, the Air Force has been looking at turning some of its remaining H-model bombers back into maritime patrol planes — a role older G variants previously filled during the later stages of the Cold War.

“I could be wrong as I’m not down range planning,” Laslie added during his online discussion of the bomber’s merits.

But deterring China, Russia and Iran correspond with the B-52’s strengths. Flying around Iraq picking off individual buildings and militants riding around in pickup trucks does not. And it’s far from economical.

This post originally appeared at War is Boring here.