Bringing Europe into Re-Balancing Toward Asia 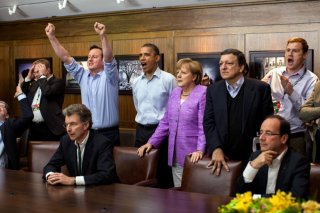 Last month at a policy game hosted by the Körber Foundation in Berlin, teams of American and European practitioners and scholars met to examine the possibility of a crisis related to the maritime territorial disputes in East Asia blowing up. The game followed a build-up of tensions, such as contretemps over flag-raisings on disputed islands and collisions with fishing vessels, in the region prior to an island seizure by Beijing. Regardless how distant the possibility of such a provocative Chinese action might appear, the policy game highlighted divergences between the United States and its European allies as well as the steps toward bringing both sides closer together over security in East Asia.

Washington has invested a lot of diplomatic effort into the region since the re-balancing toward Asia was announced by then-Secretary of State Hillary Clinton in October 2011. Despite criticism that defense cuts would undermine the policy, the Obama administration has pushed ahead on a number of fronts, advancing U.S. policy diplomatically and economically. And President Obama’s recent trip to the region highlighted the stakes and clarified U.S. commitments to security in the region.

With concerns about resourcing the re-balancing and the credibility of U.S. defense commitments as well as other measures that might be used to push provocateurs back into their shell, it behooves U.S. policymakers to think creatively about other tools and resources that might be leveraged for the region.  One of the places to look is Europe and deep Trans-Atlantic partnerships based in shared visions of progress.

If the Körber Foundation’s policy game serves as any guide, Europeans are willing to support U.S. security policy in East Asia, but are unable to make an immediate impact beyond diplomatic support in the UN and other international fora. The pressure European states can bring against an aggressive, not merely assertive, China or other provocative regional actors primarily comes through their collective strength in international institutions and a consumer market of 450 million people—now China’s largest trading partner.

Second, European states and the United States share similar interest in international institutions and international law. During the policy game’s discussion of interests, the shared interest in a rules-based order to encourage predictability in state behavior, confidence building, and shared views of dispute resolution. Agreement on this issue was clear, especially because of the very different types of governments in the region.

Third, the Europeans belief in the importance of predictable and rules-based interstate relations creates a parallel concern that aggression and violation of agreed upon principles requires a clear response. This point is particularly important to understand and is one that this author did not appreciate adequately until arriving across the Atlantic. This is not a carte blanche to pursue unconstrained security policies, but rather a sense, echoing Thomas Schelling on deterrence, that there should be no uncertainty about a response but uncertainty about the degree.

Washington must engage on both the EU and the national levels prior to any East Asian crisis for two reasons. First, European support in East Asia cannot be taken for granted. Second, European policy tools, for the most part, cannot be deployed immediately to diffuse a crisis or put pressure on China.

Among the different parties at the policy game, no two country teams seemed to agree on a shared standard for what constitutes a crisis requiring a response or how provocative a regional actor apart from China could be before European support would vanish. Once a crisis breaks out, the pressure of the situation will prevent adequate coordination and it will be too late to build a common understanding of the problems that need to be resolved.

Remembering disagreements from the last decade, the differences in what counted as violations of the rules requiring what kind of response was at the heart of disputes over Iraq. The separation of perspectives across the Atlantic may not have been bridgeable for 2002–2003, but both sides might have structured a way forward on constraining and deterring an Iraqi threat.

On a related point, the Europeans appeared to be remarkably unhappy with the status quo in East Asia and are looking for some way to change the systemic interactions and emerging security dilemmas. The United States, however, has priced minor altercations—for example, fishermen confrontations, island landings—and the state of low-level competition/pressure into its policy calculus, allowing a kind of laissez faire attitude to the dynamics that is neither too concerned, nor bent upon a solution.

Dealing with the status quo elements of the early phases of the game, the European teams wanted to address the basic fundamentals of relations in East Asia—even including some transactional quid-pro-quo ideas of the kind that make Americans jittery. As scary as such tradeoff proposals might be, they are more reflective of the urge to change the unstable, seemingly conflict-destined, systemic interactions than a concrete policy proposal.

The Atlantic divide offers an opportunity to bring complementary perspectives together to deal with the challenges Washington identifies in East Asia. Because of the immense U.S. national resources that can be brought to bear in short order, Americans have a tendency to focus on debating what tools work best today rather than looking out over weeks and months. This shortens the timeline of U.S. thinking, and diminishes the potential importance of intermediate-range policy options in the dialogue. By contrast, European states lack those resources for East Asia to make an immediate impact and, therefore, must take a longer view of any crises or militarized disputes if they want to be relevant to its resolution.

The Transatlantic partnerships already have the functionality embedded to deal with the challenge of coordinating policy and intelligence. However, to make this valuable partnership function effectively to meet the challenges of the Asia-Pacific, both sides need to discuss in a practical way the rules and evidence of crisis, provocation, and responsibility as well as potential responses.

With U.S. policy toward Asia so entrenched—engaging China for “strategic reassurance” or to encourage it becoming a “responsible stakeholder”, reinforcing the U.S. alliance and reassuring partners as well as plugging the U.S. economy into the most dynamic part of the global economy—engaging the Europeans offers a useful chance for “peer review” and a dispassionate appraisal of U.S. policy in the region. Even if final answers cannot be found for the questions raised here, the learning process for the next time Washington calls on Europe to support the liberal international order will be invaluable.

Peter Mattis is a Fellow in the China Program at The Jamestown Foundation and a Ph.D. candidate in Politics and International Studies at the University of Cambridge.