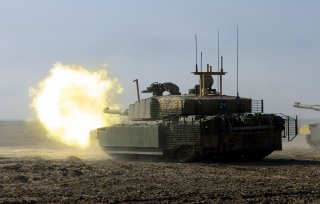 The other situation concerns the United Kingdom’s defensive commitments to NATO—and in particular the possibility that new Russian T-14 Armata tanks will narrow the performance gap with Western armor. Moscow has recently played up its military capabilities by deploying Iskander ballistic missiles and S-400 SAMs to its enclave in Kaliningrad, buzzing past the U.K. airspace with Tu-95 bombers and attempting to influence European elections with propaganda campaigns.

If the United Kingdom is still invested in pushing back against such pressure tactics, it will want to maintain the numbers of its tank force, and keep these vehicles upgraded to face contemporary threats. The U.K.’s modest tank fleet is similar in number to France’s force of 200 Leclercs, and roughly proportionate to the German tank fleet, slated to expand to 320 Leopard 2s. Russia, by contrast, has by one count around 2,700 tanks in active units—most of them older, but upgraded T-72s.

The Challenger 2 is a tough tank with an excellent combat record, and there’s no reason it couldn’t be upgraded to keep pace with current developments with armored warfare if that becomes a priority for the United Kingdom. The current improvements being contemplated, however, only constitute an effort to avoid falling too far behind.