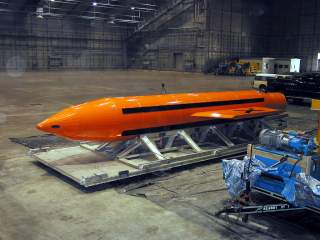 Here’s a name that the head-chopping terrorists of ISIS should remember: Barnes Wallis.

He’s the British chap who inspired that twenty-one-thousand-pound U.S. Air Force GBU 43/B Massive Ordnance Air Blast (MOAB)—also called “the mother of all bombs”—dropped on an ISIS tunnel complex in Afghanistan April 13.

However, the MOAB is but the prodigal son of weapons developed during World War II. MOAB’s grandparents were Britain “earthquake bombs,” including the twelve-thousand-pound “Tall Boy” and—biggest of all—the twenty-two-thousand-pound “Grand Slam.”

Earthquake bombs were the brainchild of Barnes Wallis, the legendary British bomb designer famous for such weapons as the “bouncing bomb” used to blast holes in German dams in the “Dambuster” raids. But Wallis faced another challenge, one that still vexes today’s bomb designers.

Some targets are easily destroyed by high-explosive bombs that detonate when they hit the ground or are fused to explode in the air. Tanks, artillery—even mortal flesh—are vulnerable to such bombs, be they dumb or smart. As for cities, bombs ranging in size from five hundred pounds to four thousand pounds, along with incendiary devices, were sufficient to flatten or burn out most every big German and Japanese city.

But when the Nazis built concrete or underground structures, the Allies had a problem. German U-boats based in France operated from concrete “submarine pens” with concrete roofs as thick as twenty-five feet. During raid after raid by British and American bombers, streams of conventional bombs fell like exploding hail on the sub pens. They had as much effect as hitting a tank with a ping-pong ball. Just as worrisome, the Nazis adopted the way of the mole and began to move their factories into underground chambers. And what about targets such as railway tunnels, key to the German logistical system and yet shielded by entire hillsides from aerial bombardment?

Conventional bombs exploding on or near the surface often waste a large proportion of their explosive force as the energy radiates away from the target. Wallis had an inspiration. Why not drop a giant bomb with an armored nose from high altitude? Dropped from eighteen thousand feet, its speed boosted by gravity until it broke the sound barrier, the bomb would be fused to bury itself into the ground or concrete structure before exploding.

The key was to “inject the largest possible charge to the greatest possible depth in the medium (earth or water) that surrounds or is in contact with the target,” Wallis wrote.

In other words, instead of explosive force, why not let Mother Earth do the work? This technique “would mean that the most destruction would be caused, not by the bomb’s charge detonating, but by the air, earth or water that surrounded it,” writes author Stephen Flower in his biography of Wallis. “In the case of concrete, if the applied energy was highly concentrated, the structure would break before it could absorb the strain.”

Look at the photos of any city hit by a major earthquake, and you can see the power of Wallis’s idea.

Here the British had an advantage over their richer American cousins. Their Lancaster heavy bomber could carry a much larger bomb load, and had a much larger bomb bay, than the U.S. B-17 or B-24. That made all the difference for carrying a twenty-two-thousand-pound Grand Slam that was twenty-seven feet long. Even then, the Lancasters had to be specially modified to carry the Earthquake Bombs.

First to see action was the twenty-one-foot-long Tallboy. The first raid targeted a railway tunnel at Saumur, France on June 8, 1944. A single Tallboy penetrated right through the hillside and collapsed the tunnel.

Perhaps the most famous Tallboy victim was the German battleship Tirpitz, sister ship of the Bismarck. For two years, the RAF had launched raid after futile raid by bombers and midget submarines against the Tirpitz in its heavily defended Norwegian lair. But the Tirpitz’s luck ran out on November 12, 1944, when two Tallboys made direct hits on the ship, and a third near-missed. Holes were blown in the hull of the battleship, which flooded and rolled over, killing more than a thousand of its crew.

The effectiveness of the Grand Slam was demonstrated on March 27, 1945, when Lancasters attacked a U-boat pen near Bremen. Through a concrete roof twenty-three feet thick, two Grand Slams penetrated, bringing down thousands of tons of rubble that made the pen unusable for submarines. Other Grand Slams were dropped on railway viaducts, breaking the spans.

However, the Grand Slam wasn’t fielded until spring of 1945, when Germany was about to surrender. Only forty-two were dropped, along with 854 Tallboys. Had the war continued past May 1945, more would have been used to destroy Nazi underground factories.

But the United States took the idea from the British and, in typical American fashion, made it even bigger. In 1945, the United States developed the T-12, a bomb that weighed a staggering forty-two thousand pounds. It was designed to be carried by the six-engined B-36 Peacemaker bomber, though it was test-dropped from a specially modified B-29.

Of course, a twenty-one-thousand-pound MOAB from 2017 is going to be a far more efficient weapon than a World War II–era bomb of twenty-two or forty-two thousand pounds. Advantages in explosive, projectile and targeting technologies will see to that. And yet, the World War II generation used their giant bombs to strike bridges, tunnels and underground facilities. The United States just used a giant bomb to kill fewer than a hundred Taliban. It seems hardly a fitting use for such a massive weapon.