Britain Goes to War on ISIS in Syria 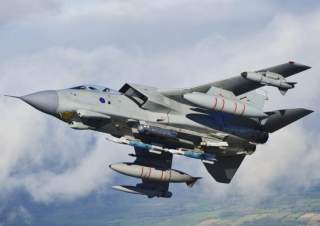 The British warplanes struck the Omar oil field deep inside Syria within hours of receiving parliamentary approval as the first step in cutting the Daesh terror organization’s financial lifeline. The Tornado bombers used 500lbs dual-mode GPS/INS and laser-guided Paveway IV bombs to destroy six targets on what is believed to be one of Daesh’s most important oil production facilities.

“The terrorists depend for their revenue on the control of oil,” said British defence secretary Michael Fallon. “Cutting off their finances is extremely important to degrading the terrorists, to undermining their campaign in Iraq and to shrink their operations in eastern Syria. It is there that these terrorist attacks are being planned.”

According to the British defense ministry, the Omar facility is one of the single largest oil fields in Daesh’s possession and represents more than 10 percent of the self-declared Islamic State’s income. Disrupting production at the Omar facility should help cut into the terror group’s finances. Indeed, British ministry of defense says that it will focus its efforts on attacking Daesh headquarters, supply routes and finances in Syria while minimizing collateral damage.

The British Tornado bombers—which flew out of RAF Akrotiri on Cyprus—were not the only RAF assets that participated in the attack. A Reaper drone and the an Airbus A330-based Voyager aerial-refueling tanker supported the British air strike along with other allied aircraft.

The British have long been involved in the air campaign over Iraq. The RAF has hit more than 380 targets in that nation thus far and the British have flown about a third of allied reconnaissance flights over the region. But like U.S. forces operating over Iraq and Syria, British forces are also focusing on minimizing collateral damage—which calls into question how effective their campaign has been.

“In the hundreds of air strikes that the RAF has carried out in Iraq, we have had absolutely no civilian casualties reported,” said Tornado pilot and RAF Marham station commander Group Captain Richard Davies in a statement. “The rules of engagement that our crews apply both in the air and by commanders on the ground mean that I am absolutely confident that that will continue to be the case with operations in Syria.”

Nonetheless, the addition of the British forces into the fight against Daesh can only be a good thing. The RAF—despite years of force structure cuts—is still a very potent air force. It is largely equipped with modern combat aircraft including the Eurofighter Typhoon and Tornado GR4, which despite its age is an excellent strike platform.

In many ways, the long-serving Tornado GR4 with its distinctive variable-geometry wings is still the mainstay of the RAF’s strike capability. Over the more than three decades its has been in service, the Tornado has been upgraded to carry modern targeting pods like the Litening III and advanced reconnaissance pods like the Reconnaissance Airborne Pod for Tornado (RAPTOR). It also carries a suite of modern precision-guided weapons including the Brimstone missile, various versions of the Paveways, ALARM Mk2 anti-radiation missiles and long-range Storm Shadow cruise missiles.

But while the Tornado is still very capable, it will eventually be replaced by a combination of Lockheed Martin F-35 Joint Strike Fighters and Typhoons. In the meantime, the Tornado crews will be pounding Daesh targets with their assortment of weapons.