Building a 355-Ship Navy: It’s Not Just the Number, It’s the Mix 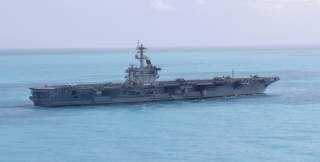 There is a debate ongoing within national security circles regarding the size of the United States Navy. How many ships does the nation require to uphold its interests on the high seas? Simultaneously collisions, groundings, the deaths of Sailors and firings of admirals as well as GAO reports revealing 100-hour shipboard work weeks have all raised questions as to the internal makeup of the fleet and its external role in the world.  Conversations regarding the path to a 355-ship Navy have been subsumed by questions about how many Sailors each ship requires and how much training do they need?  These are first principle, building block questions that go to the foundation of the Navy, and lead to the primary question that all must ask: Why do we need a Navy and what do we expect it to do?

The Navy was recognized by the Founders as the guarantor of free trade and the lead agent of the nation’s defense; the first on the scene, in even the earliest war planning scenarios. That is why the Constitution charged the Congress to “maintain a Navy” while only requiring that the legislature be prepared “to raise an Army” if conditions demanded.  The Navy was seen as enduring, the Army as transitory.  In the years following World War II, national leaders advocated for a strategy of maritime supremacy; a Navy strong enough to fight and win not only against a single opponent, but against every likely combination of opponents. Ronald Reagan, the president who campaigned for a 600-ship Navy, stated his views on maritime supremacy, “We must be able in time of emergency to venture into harm’s way, controlling air, surface, and subsurface areas to assure access to all the oceans of the world.” In other words, the Navy needs to be able to establish a salient of supremacy in any maritime region and visit violence at will upon the nation’s enemies.

Today the Navy has 278 ships, but a survey of the requirements advanced by regional combatant commanders reveal that the Navy needs a minimum of 355 ships to meet operational demands for 85-100 ships at sea at any given moment. The 355-ship threshold called for by the nation’s leadership, including the Commander in Chief, President Donald Trump, represents a net increase of 78 ships. This number has been identified after careful analysis of the eighteen maritime regions where the United States has recognized national interests.  Within these regions analysts have examined the local security requirements (not everything requires an aircraft carrier) and the rotational ratios needed to keep a ship persistently forward deployed. Depending on the distances involved and the bases the ships originate from, it could take two (Caribbean), three (eastern Atlantic), four (western Pacific), or even five (Arabian Gulf) ships to keep on warship on station. These ratios are driven in part by the amount of time required to maintain a ship (3-6 months in shipyards after returning from a deployment), training a crew (six months) transit to the deployment location (up to a month), execution of the deployment plan (six to nine months) and then the transit home (again, up to one month.

This deployment cycle was relatively easy to honor with the fleet of 400 ships, which the Navy had until 1995, but became increasingly difficult to maintain as the Navy declined through 350 ships (1997) to 300 ships (2003) and impossible to accomplish within the present, 2017, 278 ship fleet. When the fleet is as small as it presently is, compromises have to be made within the deployment cycle, either in training or maintenance. A few years ago, maintenance was sacrificed, but when the fleet’s material readiness declined so precipitously that some ships could no longer get underway, maintenance was re-emphasized and training was sacrificed in order to keep ships at sea.  However, now that ships have begun to experience collisions and groundings with accompanying loss of lives at an alarming rate, the time has come to declare the system officially broken.  Investigations by the Government Accounting Office revealed that many ships in the western Pacific, the location of so many collisions, had as many as 37% of their training certifications waived in order to meet their deployment schedule.  It is clear that the current deficit of 78 ships is impacting more than just the nation’s long standing national interests or even our strategy of maintaining maritime superiority. Today, the inadequate size of our fleet is resulting in the deaths of American Sailors as they valiantly work 100-hour weeks to “do more with less.”  These numbers reflect a generation of Navy leadership attempting to make the fleet more efficient. It is thus critical that the Navy shift course dramatically and address the current fleet deficit.

This deficit can be made up in a number of ways. For instance, not every national interest requires a super carrier to support it and thus it would not be wise to buy 78 new super carriers. Naval leaders could neither afford to buy them nor man or maintain them. The Navy could also buy 78 rowboats, but they would not be credible as combatants or add to our overall defense. However, there are broad array of combat ships that lay far beneath the costs of a carrier and far above the effectiveness of rowboats. These include ballistic missile submarines, cruisers, destroyers, fast attack submarines and frigates. In the past, even within the last generation, the list would have also included battleships, but the last of these have left the fleet and will not return for a number of reasons. So, in the end, the Navy needs to decide what types of ships amongst the variants it currently employs, and in what ratio, it needs to buy.

Russia’s Military Is Back

The “cruiser” is a name that is well over a century old and comes down to the present day from armed sailing vessels that served the role their name implies, cruising independently, showing the flag in peace or performing commerce raiding missions in wartime.  As navies made the transition to wooden hulls to steel and from sail to steam, the cruiser designation remained in use and was attached to heavily armed ships that could go fast, still raiding enemy merchant lines of communication, but lacking the protective armor built into line of battleships that allowed them to slug it out in big gun battles.  A cruiser was designed to attack ships less capable that it was, while retaining a speed advantage to run away from others more powerful. With the eclipse of the all big-gun battleship during World War II, cruisers transitioned to a new roll, serving as protective air defense escorts for the carriers, using their large and small caliber guns to shoot down attacking aircraft. They also provide long range shore bombardment along with the larger battleships during amphibious assault operations.

Today’s Navy has 22 Ticonderoga cruisers, each equipped with the Aegis Mark VII combat system, are descendants of those air defense picket ships, substituting their advanced Standard Missiles for the large guns of old to shoot down aircraft or missiles attempting to attack the carrier. They each come with 122 Vertical Launch System (VLS) cells, two-thirds of which are filled with surface-to-air or surface-to-space Standard Missiles.  The latest iterations of the Standard Missile, the SM-3 and SM-6, possess abilities to shoot down ballistic missiles as well as aircraft and cruise missiles.  Cruiser requirements are generally linked to the job of defending the nation’s high value units, the super carriers. Each of the nation’s 11 super carriers, valued at six to thirteen billion dollars each, carrying sixty-five aircraft and 5,000 Sailors, need two cruisers to defend them while operating in hostile waters. Realistically, the required number of cruisers ought to be higher, as in the past each of the Navy’s smaller, light amphibious carriers had been attended by one cruiser while on deployment. Such a calculation would drive the basic cruiser requirement to 33, and the addition of a 12th carrier, as called for by the president, would raise the baseline to 35.  Problematically, today’s compliment of 22 cruisers are approaching the end of their planned service lives, although there has been some thought given to performing Service Life Extension Program modifications on them to buy another five to ten years of performance. Given that, it will cost between three and four billion dollars to replace the Ticonderoga class cruisers.  Their replacements might be modified Arleigh Burke Class destroyers.

Destroyers are a relatively new creation within the fleet. “Torpedo Boat Destroyers” were introduced to the fleet following Japan’s success with torpedo boats against the Russian navy in the early years of the 20th century. Small, swift, lightly armed craft were designed to escort larger combatants and then peel off to pursue and sink attacking torpedo boats before they could get within range of the battleships.  In the years between the great world wars, torpedo boat destroyers became just “destroyers” and took up duties as convoy and task force escorts, performing anti-submarine and anti-surface warfare missions.  During World War II they added their small guns to the air defense picket, but their main focus remained on enemy surface and subsurface craft, roles they continued to play into the Cold War. This continued until the early 1990s when the Aegis equipped Arleigh Burke class destroyer joined the fleet.